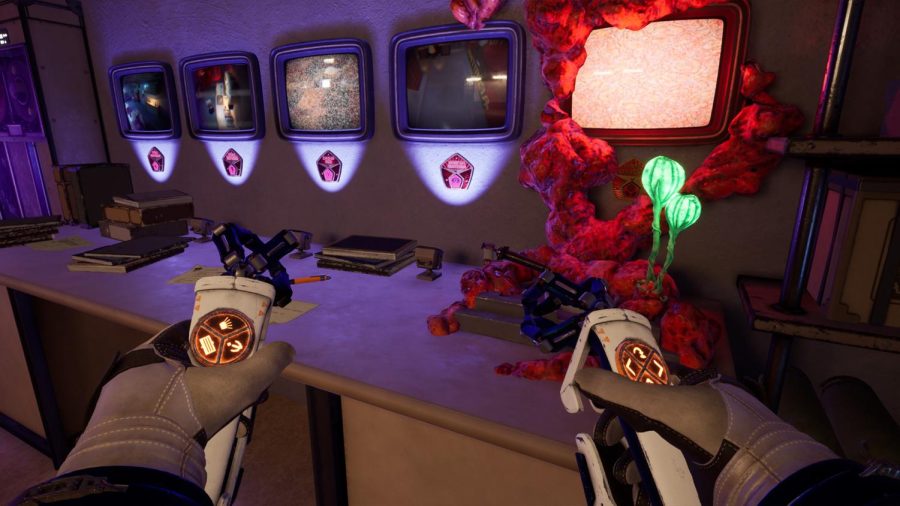 A screenshot from the video game “Red Matter” by Vertical Robot is shown above. This VR game is one of three that deserve more recognition.

In wake of Mark Zuckerberg’s magnificently cringe reveal of several titles coming to the Oculus Quest, a move made in coincidental conjunction with Facebook’s rebranding amid privacy violations, the virtual reality landscape has been getting a lot of buzz as of recently.

While the medium – and Oculus as a brand – has existed for nearly a decade, recent years has seen the platform gain much desired AAA attention, with tentpole tiles like “Half Life: Alyx” bringing back the icon PC franchise after nearly 13 years to “Medal of Honor: Above and Beyond” bringing back the iconic World War II shooter (which was created by Steven Spielberg of all people) to VR for the first time. Nonetheless, many of the best titles to play on VR are of the smaller, more experimental scale. Here are a handful of delightful titles to check out if you want to get the most out of VR.

My personal favorite VR game, this indie gem by Tender Claws is a short-narrative experience for those looking to truly push the boundaries of VR as a storytelling medium. You are a newly recruited human employee of a wonderfully energetic company of robotic assistants taking jobs from inanimate objects in need of help. Essentially, the whole world is made up of objects, all with distinct personalities, and you are the last repair guy in the world. Don’t think too much about the premise as it only gets darker the more you question it. Silly antics of helping a pinwheel blow in the wind, a slab of butter be melted or help a tumbleweed tumble set a positive and uplifting mood. It’s an engaging and fun-filled experience that fully utilizes VR for its many gags. All I can say without spoiling its true story is to never answer the phone.

Another indie gem that takes players for a narrative whirl is “Red Matter” by Vertical Robot. The VR game is set in an alternate sci-fi Cold War, fought between the fictional nations of the Atlantic Union and Volgravia (unashamed analogies of the United States and USSR). You play as Agent Epsilon, agent for the Atlantic Union. After crash landing into the moon Rhea, the player begins to explore the base to find a mysterious set of documents tied to ending the Cold War. Despite its fictional universe, the atmosphere and art design is very reminiscent of ‘60s space-race and atom-punk aesthetic, providing a unique and cool world for you to explore in every nook and cranny. Most of the game is scavenging and reading the log entries of the base’s abandoned inhabitants, so the slower pace gives the industrial, claustrophobic sound design room to shine, immersing you in such a way that you’ll long remember this one after the credits roll.

The shortest on this list, with the total play time being just 30 or so minutes, small package by Pelican Party Studios is completely free to purchase and play. A short film translated into VR, all seems normal (and boring) in a color-deprived office cubicle. Like the beginning of “The Matrix,” this simple illusion of normalcy slowly falls apart as the office space grows more disturbing with every glance. It uses VR quite effectively to sell its unsettling atmosphere as your cubicle embarks on a downward descent into insanity. The short run time and free entry fee make this one of the best first steps one can take into the VR indie scene and a perfect example of the narrative strength only VR is capable of flexing.