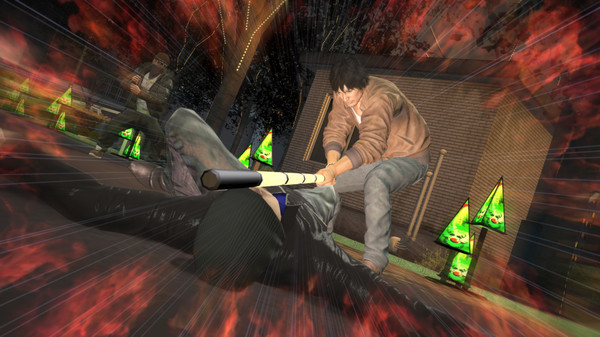 Screenshot from “Yazuka 5 Remastered” of one of the characters smashing someone down with a weapon. The game includes a variety of features and modes for different types of gameplay.

The Yakuza series is a fascinating beast. It simultaneously exemplifies the best aspects of the video game industry and the worst elements as well.

The series, from SEGA developer Ryu Ga Gotoku Studio, has gone on since 2005, following the story of Kazuma Kiryu, a low-level bar brawler with a heart of gold that, over the course of series, rises to the highest ranks of the yakuza crime underworld of Japan.

“Yakuza 5,” the fifth entry in the series, stands out amongst its predecessors for a multitude of reasons. The most immediate being the massive length of its story mode, clocking in at more than 70 hours. The inclusion of five separate protagonists across five separate cities really sells the whole fifth entry sense of scale.  However, “Yakuza 5” differs in how it truly embodies the term “epic.” Not in the buzzword box-art marketing slogan rather the whole meaning of a massive, sprawling journey spanning the lives of its cast who are going on as much of the journey mentally as they are physically.

The story revolves around the core cast pursuing their unrelated goals. Kiryu is a depressed 40-year-old who is trying to make a living as a taxi driver, only to get wrapped up in a coup d’etat of his former crime syndicate, the Tojo Clan. Taiga Saejima is an incarcerated felon who busts out to find the killer of his yakuza brother evading the police and vengeful yakuza rivals. Haruka Sawamura, adopted daughter of Kiryu, is living it up in the big city to become a pop star. Shun Akiyama is an easygoing money lender searching for answers (and a receipt) after his client’s suicide. Lastly is Tatsuo Shinada, a defamed baseball player searching for truth after a clue points him to being the center of a major league conspiracy.

All of these stories are nearly unrelated, some standing in their own right as separate games at times (Haruka’s most notably as her chapter features no combat, rather dance battles and soap opera straight out of Disney Channel), but they all collide in epic fashion in a final act where you go throw massive yakuza brawls with swords and traffic cones to an electric concert in Tokyo just minutes later.

The gameplay is where this game elevates itself above its predecessors and becomes truly epic. Unlike the prior games, which were broken into distinct, strict combat and dialogue sections, “Yakuza 5” has so many gameplay features and modes, it is truly astonishing. You can acquire guns and aim down sights in hunting environments, with extensive tutorials on snares and different types of game. You can play in a first-person snowball fight. You can approach random street pedestrians for spontaneous dance battles. You can drive a car, and actually navigate the city with a vehicle. That sounds so simple, yet it’s such a huge innovation for this series.

That being said, many of the elements familiar to Yakuza fans are still here in their aging presence. Environments and assets are frequently reused, thrown together in cities that are highly restrictive of our on-foot movements. The random gang encounters are still unavoidable and grow tiresome after the 40-hour mark.

That being said, I still highly recommend that anyone remotely interested in gaming gives this series a try. Despite how ludicrous it can get at times, this series is really accessible and enjoyable given its cinematic attributes. It’s not that hard to wrap your head around. So, if you’re in the mood to get deep in a crime drama of epic proportions, check this series out, and stick with it until the fifth entry. It’s well worth the wait.