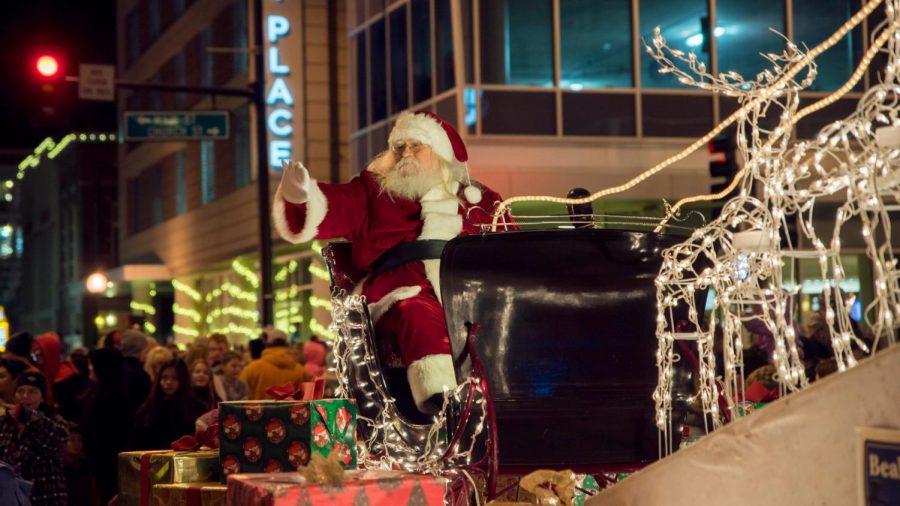 Santa Clause waves to parade goers in front of Hyatt Place Hotel in downtown Champaign. The 21st Annual Parade of Lights — organized by the Champaign Center Partnership and presented by Christie Clinic is set to happen on Saturday at 6:00 pm.

The 21st Annual Parade of Lights — organized by the Champaign Center Partnership and presented by Christie Clinic — will bring the community together Saturday to kick off the local holiday shopping season. The “Blue Christmas/Holidays” theme will adorn the streets with bright blue lights and camp-style decorations as floats cruise through.

This weekend’s parade is an opportunity for the organization to celebrate small businesses across Champaign County, said Executive Director Xander Hazel. It is intentionally held on Small Business Saturday, a shopping holiday celebrated the day after Black Friday to encourage shoppers to support local businesses as they search for holiday-season gifts. Most businesses will remain open throughout the day, allowing attendees to enjoy pre-parade activities, eat lunch and dinner and get ideas for where to shop.

Families will have the opportunity to tour the illuminated downtown area on horse and carriage rides before the start of the parade. Children will have the chance to meet and take pictures with Santa Claus at Big Grove Tavern. Visitors should keep an eye out for the Elvis impersonator walking the streets of downtown. Farren’s Pub and Neil St. Blues will offer VIP outdoor seating with exclusive food and beverages during the parade.

Chief Medical Officer Dr. William Pierce was selected from a pool of community-nominated candidates to be this year’s grand marshall.

“We did put special consideration for frontline workers, essential workers,” Hazel said. “(Dr. Pierce) had been instrumental in disseminating information and guidance about COVID throughout the pandemic.”

In light of the Waukesha Christmas parade tragedy last Sunday night, the Partnership’s office has received inquiries regarding parade safety protocols. The incident left six people dead and more than 60 injured after a man drove an SUV into parade participants and attendees. The Partnership, Hazel explained, works closely with the Champaign Police Department and city of Champaign staff to ensure the safety of parade spectators and participants. Organizers plan to install barricades all along the parade route with squad cars positioned at key intersections.

The Parade of Lights festivities won’t look exactly like it did for the 19 years prior to the COVID-19 pandemic. Spectators, float and parade participants and volunteers are expected to comply with Centers for Disease Control and Prevention’s guidelines. Masks are required at all events with the exception of the horse and carriage rides, candy crawl and parade itself. Organizers have asked that attendees be respectful of others’ varying levels of comfort.

Candy normally distributed by float participants during the parade will move to the new “candy crawl” event. Children and families will be able to collect candy from 13 different businesses in the downtown area in trick-or-treat fashion starting at 1 p.m.

Although the parade traditionally concludes with a tree lighting ceremony at One Main Plaza, the Partnership has decided to cancel it this year to keep crowd densities low. The 30-foot-tall Tree of Lights will still be available for viewing at the intersection of Neil and Church streets.

“There’s a little bit of something for everybody here at the parade, and in downtown Champaign, so we invite everybody to come in and participate,” Hazel said.