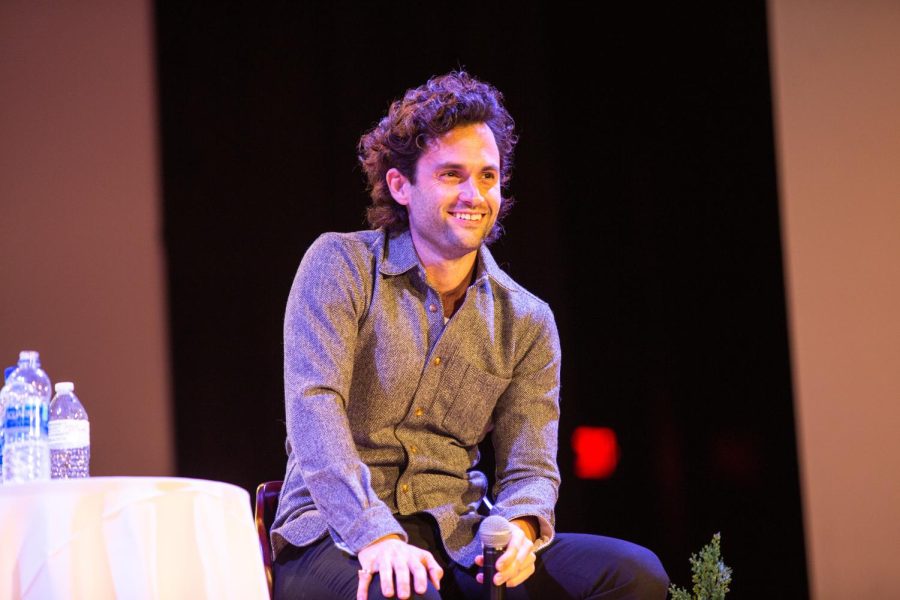 Actor Penn Badgley and Arizona State University professor Nura Mowzoon speak to students Thursday as a part of their “Can We Talk?” discourse series. The University of Illinois was the pair’s first in-person stop since the pandemic to promote social change.

At 4:30 p.m. Thursday, fans started eagerly lining up outside Foellinger Auditorium, umbrellas in hand as they huddled together under Foellinger’s roof to protect them from the downpour that ravaged across campus.

But the weather didn’t stop these fans from lining up an hour early or from other fans filling up Foellinger completely to see actor and activist Penn Badgley speak on the University of Illinois campus.

Badgley is the star of the hit thriller Netflix series “You,” where he plays a bookstore owner turned serial killer Joe Goldberg who’s obsessed with finding “the one” and doing whatever it takes for love. The show’s third season premiered Friday, and the show has already been renewed for a fourth season. Badgley also starred in the popular drama series “Gossip Girl” as Dan Humphrey.

But he wasn’t on campus to promote his show (though his character in “You” had a surprising relevance to Thursday’s discussion). Badgley was here as a part of his “Can We Talk?” series that he does with Dr. Nura Mowzoon, relationship coach and professor at Arizona State University. Badgley and Mowzoon visit different college campuses as a part of their “Can We Talk?” series to engage in deep, constructive dialogue with college students and encourage them to create social change within their communities.

The “Can We Talk?” series also kicked off the “Exchange for Justice” speaker series at University of Illinois hosted by Organic Oneness, a grassroots social justice RSO dedicated to discussing and creating solutions to social justice issues on campus.

Badgley and Mowzoon had to put their “Can We Talk?” series on hold due to the pandemic, but they finally started it back up, and the University was their first college visit since doing so. Badgley told the audience that he hasn’t seen so many people in one place since February 2020. He also expressed his lack of a college experience.

“Not only have I never been to U of I before, I’ve never been to college,” Badgley said after walking onto the Foellinger stage for the first time.

After introducing themselves, Badgley and Mowzoon briefly explained why they were at the University of Illinois and what their goal was while they were on campus for a few hours.

“Our working thesis is that one of the elements of the most grassroots kind of actions we can take in our lives is to think about the way we conduct ourselves in our most intimate relationships,” Badgley said.

He also shared that he feels a responsibility to use his fame and platform to lead and encourage discourse about topics he believes can help people strengthen their relationships.

“While we’re in an unjust world experiencing disequilibrium that gives so few people power, so few people platforms, it’s important for those who do to share them and to use them for some positive effect,” Badgley said.

Badgley and Mowzoon said improving intimate relationships (which Mowzoon clarified can mean both romantic and non-romantic relationships) can help us understand and possibly improve larger, more social relationships, too. Mowzoon challenged the audience to try to find the connection between larger change, social change and our own individual relationships.

After explaining to the audience why they were at the University, Badgley and Mowzoon discussed emotional violence and the ways it’s often present in our lives without us even realizing.

“I think it has something to do with, at least between two people, not understanding the appropriate boundaries between you and another, attempting to control their reaction to you,” Badgley said regarding emotional violence.

He said emotional violence is often a result of a fear of feeling inadequate or less than loved by someone. Mowzoon added that we’re living in a time where a lot of people’s defenses are high, so when they get hurt, they struggle to forgive or understand that hurting us may not have been someone’s intention. She said this often leads to the overuse and misuse of terms like “toxic” and “gaslight” when that’s really not what people are doing.

“We’re so quick to throw these words to people who may not actually deserve it, and I think that, to me, can also be a form of emotional violence,” Mowzoon said.

The two then answered questions from the students in the audience about various topics, including how to maintain a healthy mindset when going into a relationship. Mowzoon said that stating clearly what you need in a relationship can help us sort out what’s right and what isn’t right for us, which she said can be difficult.

Another student asked why Badgley thinks audiences are so enamored by Joe Goldberg, Badgley’s character in “You.”

“We can’t help but glorify anything we see, and so much goes into constructing a scene,” Badgley said.

He said there’s a difference between what a viewer sees and what an actor goes through during a scene, so viewers don’t see the behind-the-scenes conversations on set or how the cast and crew film a scene.

But Badgley said he’s thankful that “You” doesn’t justify the actions of his character, though people still seem to find Joe Goldberg desirable.

“Thank God that our show clearly is very openly portraying him as a bad man, but it’s interesting that people still find him as a romantic,” Badgley said.

Later on in the talk, Badgley came back to his character in “You” and said he is worried about the message his character may be giving audiences and fans.

“I am concerned about the effects of the normalization of violence in personal relationships, which Hollywood has been doing since its inception,” Badgley said. “I take that very seriously.”

After a series of questions and answers between students and Badgley and Mowzoon about topics ranging from toxic masculinity, generational trauma, forgiveness and allyship to the LGBTQ+ community, the two thanked students for joining them and encouraged them to keep having these conversations beyond the event.