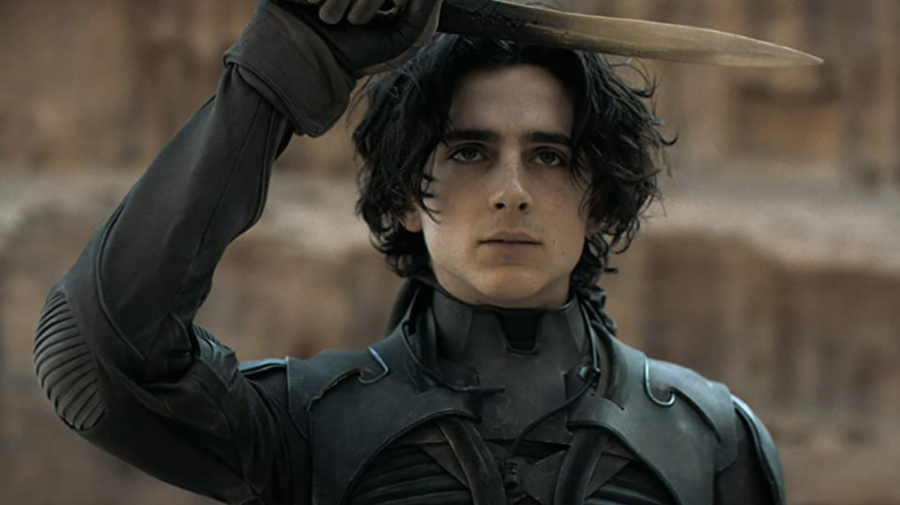 Fans and critics are calling “Dune” the epic of the year, perhaps even the decade. Based on the novel by Frank Herbert and the 1984 film, “Dune” sets out to test the boundaries of modern technology and special effects. The science fiction film stars A-listers like Timothée Chalamet, Jason Mamoa, Rebecca Ferguson, Oscar Isaac and Zendaya.

Set in the year 10191, the honorable family of Atreides must leave their planet in search of ruling over the hazardous desert planet Arrakis. Arrakis is currently inhabited by the Freman, otherwise known as natural desert people. The Freman don’t expect Duke Atreides and his family to last long, as “the desert will kill them” if nothing else does.

Paul Atreides, played by Chalamet, is an only child who is expected to take over as Duke after his father, who is played by Isaac. Paul has been having dreams that he believes are prophecies. Unsure if his dreams represent the past or the future, he is determined to find out what they really mean and why he is having them.

Those around Paul soon figure out there is something special about him, some sort of aura they can sense. Many begin to believe Paul is the Messiah, destined to save Planet Arrakis and its people.

Paul’s mother, played by Ferguson, is one of the only people who knows of Paul’s secret, and she does everything in her power to protect him, though she too has secrets of her own and may not be who she says she is.

The family’s first night in their new home on Planet Arrakis is nothing like they’d hoped. Danger strikes just as quickly as the Duke puts his head down to sleep, and the quiet planet of Arrakis turns to chaos in mere moments.

The army from Arrakis barely has time to prepare for a full out war, led by the strongest man in the galaxy, Duncan Idaho, played by Mamoa. Mamoa’s strong stature accurately depicts his character in “Dune,” one who is fearless and is willing to risk his own life if it means Paul and his family will stay safe.

Paul looks up to Duncan like he looks up to his own father. When Duncan shows up in Paul’s dreams in danger, Paul attempts to stop Duncan from fighting the Freman to no avail. Chalamet and Mamoa’s unlikely chemistry is evident and almost charming to watch throughout the film.

The casting of Chalamet to play Paul was unexpected. He has previously starred in several romance-drama movies, most notably “Call Me By Your Name” and “Little Women.” “Dune” was his first ever sci-fi movie, and it took a bit of adjusting to seeing Chalamet slay monsters and live in space. While Chalamet’s acting skills were on point, it was difficult to be fully immersed in the science-fiction aspect of the movie with Chalamet as the star of the film, especially considering Paul is an extremely strong and brave character, yet Chalamet does not necessarily portray himself as strong and brave.

Fans of the well-anticipated movie were excited to see Zendaya on the big screen, but most were disappointed to find out she was on the screen for a total of nearly seven minutes. Most of the Zendaya shots were seen through Paul’s dreams, as this mysterious character who works with and sometimes against Paul.

“Dune” is a complex plot filled with catastrophe, an ominous love story, intense action and outstanding special effects that can only be appreciated on the big screen. The film did an impeccable job at introducing the plot and leaving fans yearning for more character development and a more in-depth storyline. Though a sequel is only rumored currently, if the movie stayed as it is now, there are far too many questions left unanswered. Without a part two, “Dune” would not do the emotionally intense story justice.