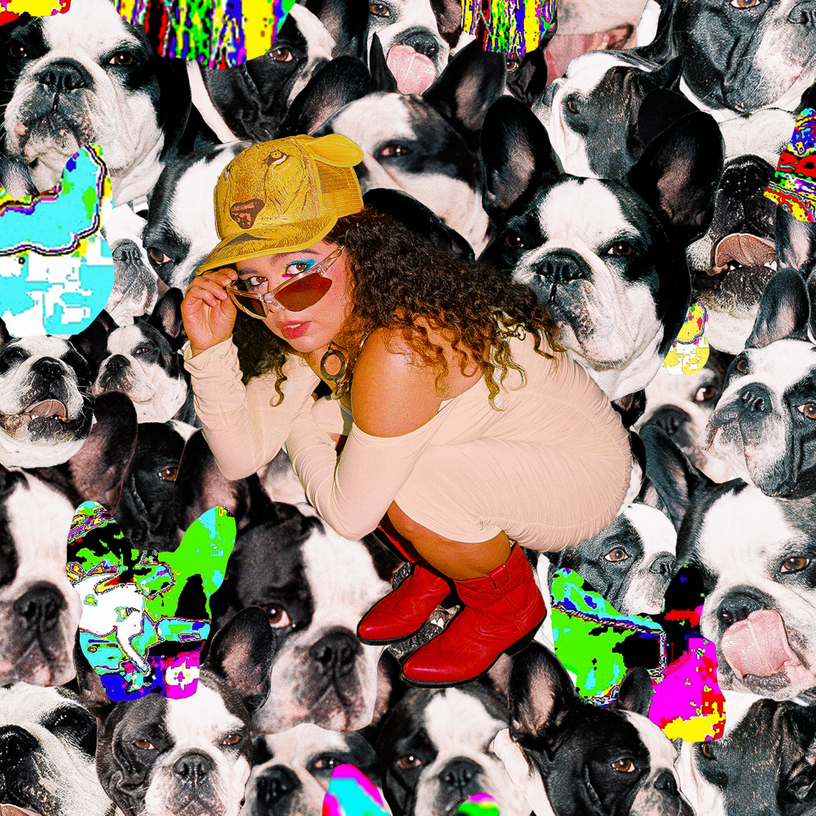 Remi Wolf poses for the cover for her first album “Juno” that was released Oct 15. Wolf takes a spin on soul and pop in her album with inspiration from other genres.

Fans of Payday and JAWNY will appreciate Wolf’s lyrical playfulness and lightheartedness, while fans of Claud will appreciate her vocal tonality. If you listen to Still Woozy, songs like “Liquor Store” and “Street You Live On” embody his signature gooey-pop sound.

Wolf spiraled to fame almost overnight last year after her song “Photo ID” went viral on TikTok. This debut album proves Wolf is no one-hit-wonder, with tunes that will have listeners groovin’ and boppin’ their heads along to them within seconds.

Wolf opens the album with “Liquor Store,” a single she previously released in late July. A heavy percussive rhythm and syncopated bassline carry the tune, yet there are moments when the instruments drop off, leaving behind Wolf’s exposed vocals that are supplemented by piano chords. Also, the tune includes this killer line: “And now I’m waking up to a nightmare / ’cause you like getting in bed with the enemy.”

“Anthony Kiedis” pays homage to the lead singer of the Red Hot Chili Peppers, Anthony Kiedis. Wolf uses overtones to harmonize with herself, editing her pitch to comically high levels that weirdly fit the vibe of the tune.

She totally changes the dynamic of “wyd” with a bridge that features her slightly whiny, upper-range vocals which bring an incomparable level of playfulness to the song. In “Guerrilla,” Wolf plays into her synth’s wide breadth of audio, enhancing the piece via sounds of glass breaking and delayed vocal and instrumental effects.

“Quiet on Set” is an album favorite, resembling Payday’s comical lyrical style with an emphasis on Wolf’s catchy chorus and funky instrumentals that effortlessly carry the tune’s groove. Up next is “Volkiano,” which starts with an exposed guitar riff that deviates from Wolf’s usual energy, prepping listeners for a more lowkey tune compared to other songs on the album.

In “Buttermilk,” Wolf entrances listeners with its triplet percussive rhythm that’s as gooey as molasses. The tune is almost infuriatingly catchy, especially because Wolf says the word “buttermilk” at least 30 times in the song.

“Sally” features a bassline that travels the length of the guitar neck and complements Wolf’s energy, continuously dipping into the instrument’s low tones and soaring into its upper register as the tune’s energy peaks. “Sexy Villian,” on the other hand, takes the vibe in a completely different direction with its laid back energy and a truly groovy bassline that slightly emulates the “wah” sound of a wah-wah bass effect pedal.

Wolf begins “Buzz Me In” with stripped vocals that are joined by her typical upbeat, robust instrumentals in the cheerful-sounding chorus. “Street You Live On” closes the album on a bittersweet note. Its ending fade-out finishes the song and the album itself, giving listeners a sense of finality that’s similar to applying varnish on a finished painting.

“Juno” is an album made for late nights adventures with friends, go-kart racing and trips to summertime county fairs where mornings and nights are coated in sweet-tasting cherry snow cone syrup. Wolf’s debut showcases her mastery of a kaleidoscope of sounds, creating textured soundscapes full of playful songs and lyrics.

In January, Wolf will go on tour in support of her album release. The tour kicks off on Jan. 24 in San Francisco and ends in Philadelphia on Feb. 16. Wolf will play at Metro in Chicago on Friday, Feb. 4. For more information on purchasing tickets, visit metrochicago.com/event/remi-wolf/.