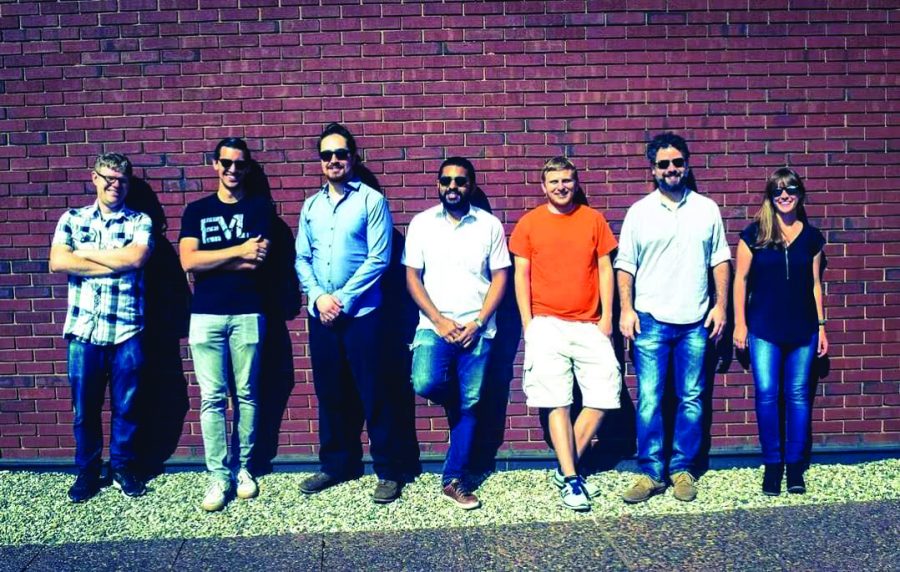 Jazz musician Jose Guzman poses with his bandmates for a full band photo.

Each year, visitors and the community members celebrate the achievements in music during the C-U Jazz Festival. This year’s festival, occurring Oct 8-11, will offer various jazz artists performances, both virtually and in person. One of the in-person headliners includes the Afro-Caribbean Jazz Collective, which will perform at Rose Bowl Tavern this Friday.

The Afro-Caribbean Jazz Collective formed two years ago and has performed around the C-U area ever since. Most of the group’s members met while studying at the University of Illinois School of Music.

“I was roommates with our current bassist and slowly met the rest of the band in different ensembles,” said Jose Guzman, the group’s guitarist. “The percussionists, which were the missing links to the ensemble, and I met in the (University) Latin Jazz Ensemble.”

Like most groups over time, The Afro-Caribbean Jazz Collective’s artistry has changed since their formation. They began playing different fields of jazz using the Great American Songbook, which most band members knew.

“We then slowly ventured into more Cuban and Puerto Rican focused music,” Guzman said. “Our music has definitely matured since two years ago, and I’m excited for what the future holds.”

Each Afro-Caribbean Jazz Collective member brings in their own musical influences, from salsa to traditional Brazilian music.

“We’re all at seven different points of view,” Guzman said. “At the start of the group, we’ve tried to incorporate this as best as possible, but we also like trying different things.”

Guzman, originally from Ponce, Puerto Rico, has been playing the guitar for 17 years. He started out learning how to play rock ’n’ roll, but he’s always been passionate about jazz music. At the age of 18, Guzman moved to San Juan to study engineering. However, he realized he had a calling to music and changed his mind.

“Latin jazz is the domain of Puerto Rico and runs through our veins,” Guzman said. “I was into jazz long before getting my undergraduate degree in jazz studies.”

When COVID-19 hit, Guzman thought the quarantine could be a time to hone in on his musical skills. In July, he had the opportunity to put together a cover of “I Can’t Help It” by Michael Jackson with his friends. However, he also experienced some adverse effects.

“The money-making and the gigging has certainly diminished to the point where our upcoming performance will be my second show in seven months,” Guzman said. “There was also a lack of seeing musicians face to face and enjoying the process of making music together because communication was through email.”

Despite these difficulties, the Afro-Caribbean Jazz Collective is currently gearing up for their performance at the C-U Jazz Festival.

“We’re going to be rehearsing in an outdoor setting because of regulations and safety,” Guzman said. “Some of the group members are parents, so we don’t want to risk anything.”

The group was given a grant by the Urbana Arts Council, which they wanted to use for a dance party during their performance. The idea was ruled out due to the pandemic, so Guzman has composed music to be a part of their performance instead.

“We’re going to be exploring grooves from Cuba and Puerto Rico that we haven’t done before,” Guzman said. “Hopefully, it gets some people to move and feel better.”

Live performances will most likely take a hit during the winter season, but fans of the Afro-Caribbean Jazz Collective should expect some new releases in the future.

“After rehearsing for our performance, and we’re going to be talking about how to move forward,” Guzman said. “We’re certainly looking at doing another recording because we have only a few up on Spotify right now.”

Afro-Caribbean Jazz Collective will perform Friday from 7-9:30 p.m. at the Rose Bowl Taven.