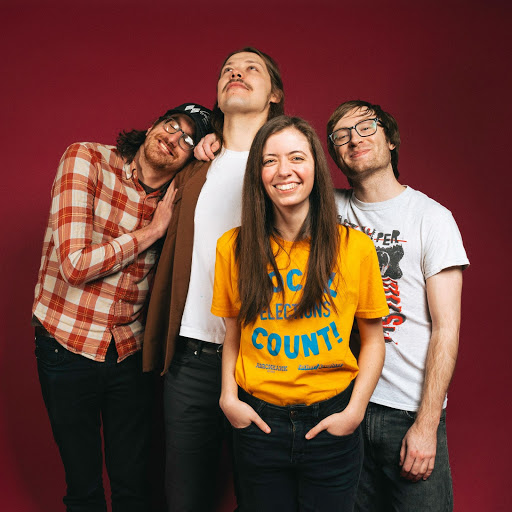 The band Ratboy composed of Julia Steiner, Sean Neumann, Marcus Nuccio and Dave Sagan pose for a photo. Ratboy is releasing a new album for their tenth anniversary and plan to perform it on tour in Europe next year.

Still high off the release of their latest album “Happy Birthday, Ratboy” earlier this month, Ratboys is excited to begin touring in Europe next year with Julien Baker.

Ratboys’ latest album “Happy Birthday, Ratboy” was released on April 1 to celebrate the band’s 10-year anniversary. The record features 10 new recordings of the band’s earliest songs, along with a newer bonus track from 2019 titled “Go Outside.”

Steiner said she can still picture herself in the spaces where she first wrote some of the album’s songs, such as in her childhood bedroom, her college dorm room and even her bathroom.

Steiner wrote “Down the River” in high school, but other songs like “Have a Heart” and “Space Blows” were written during her college years. “Go Outside” was the only song on the album written post-college.

She said one of the biggest changes on the album is that Ratboys expanded their musical interests by approaching songs with some new ideas and fresh perspectives on what they wanted to sound like based on their music tastes and who they are as a band.

“So the meanings might not have changed, but the songs themselves have kind of grown with time, which is really satisfying,” Steiner said. “I feel lucky that they still have meaning to me and still feel good to play.”

One way the band expanded their musicality was when Steiner bought her first electric guitar and began playing louder music. She said turning up the volume of her music, especially at live shows, allows her to grab people’s attention in a different way and makes her feel more empowered.

“It feels really, really good to just be able to just stand in front of a loud amp and just to make sound that knocks you back a foot or something,” Steiner said. “It’s good to have those moments and encounter those moments with quieter moments or like build tension.”

Steiner said she enjoys revisiting old songs and breathing new life into them, comparing guitar pedals to paintbrushes that she uses to paint her sound and add different colors to her music. She said she’s gotten excited about the idea of getting louder and stretching the limits of volume, distortion and tone.

Ratboys’ Midwestern roots have encouraged the Chicago-based band to be more accepting of different types of music and sound. Steiner said the Midwest is unique in its general open-mindedness toward a variety of music genres, and the people Ratboys have met in the Midwest are eager music listeners.

“Living in the Midwest, it’s so easy to kind of drive to different places,” Steiner said. “It’s a great place to start a tour, and so because of that, we’ve been able to meet lots of different people from all over the country and kind of expand their horizons a little bit that way.”

Once the COVID-19 quarantine hit in March 2020, Steiner said she and the band were shocked because they didn’t realize how all-encompassing the pandemic’s effect was. When Ratboys had to cancel their 2020 tour, they were caught by surprise and were disappointed, but Steiner said they felt grateful they were safe at home and not out on the road when everything shut down.

“But definitely the experience of going through that of canceling the shows, at least we know what that’s like,” she said. “And if we ever have to do that again, we’ll be a little bit more prepared to make that call at the right time and know how to communicate with people.”

Steiner said Ratboys have a couple of local shows around Chicago, Indiana and Wisconsin planned for August. She said the band is going over plans to ensure everything is safe for both performers and concertgoers.

In 2022, Ratboys will go on tour to Europe with indie-folk singer and instrumentalist Julien Baker. The band will perform throughout the world in countries including the Czech Republic, Germany, France and Denmark.

Steiner met Baker by chance in 2016 and has stayed in touch with her since then. She said the tour opportunity “fell out of the sky into our laps” when Baker invited Ratboys to join her Europe lineup.

On April 29, Ratboys will be streaming via Bandcamp to celebrate their 10-year anniversary, and they’ll be playing songs from across their discography and reminiscing on tour experiences and shared memories from playing together.