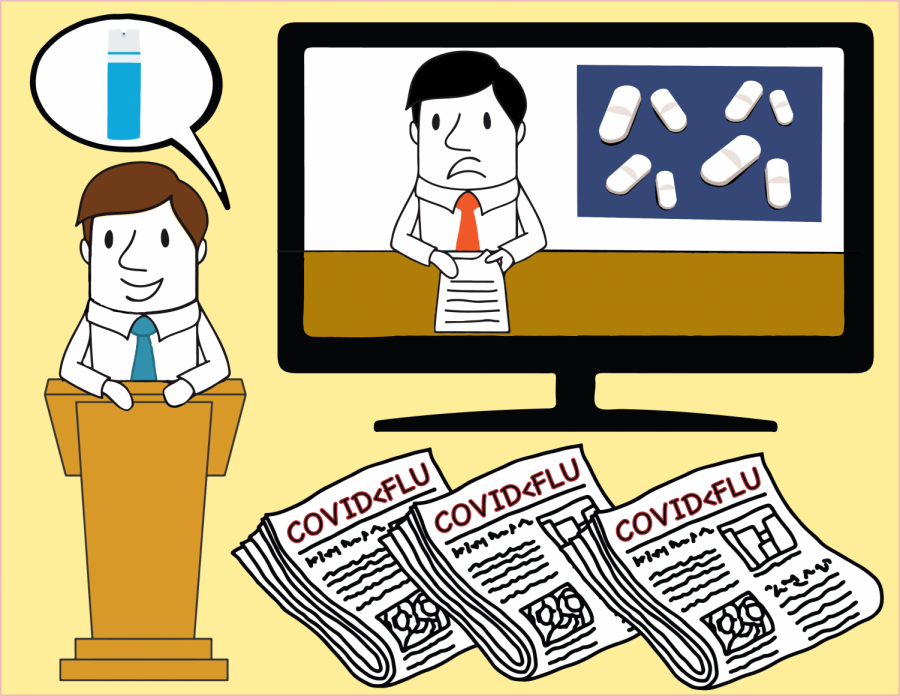 By The Daily Illini Editorial Board
April 30, 2020

Upon watching an apocalypse film, one might observe the same tropes. A natural disaster, some disease or an insurmountable evil suddenly hinders normal society. Although chaos unfolds, the main actors respond in similar manners.

Imagine a disaster film where the protagonist couldn’t turn on the news to reliable reporting. Imagine if the government didn’t respond diligently and appropriately and downplayed the situation until it was too late. Imagine that rather than believe the experts, thousands endangered their own lives and the lives of others to protest the government’s response.

The COVID-19 pandemic has unveiled just how unrealistic the Hollywood cliches truly are, not because society couldn’t break down from a disaster, but because politics and partisan pride would always preclude a unified effort to remedy the problem. When the next pandemic rolls around, someone ought to ask it nicely not to materialize during an election year.

During a crisis such as this one, it is paramount that people receive information from the proper channels. Those channels must also disseminate accurate information. As the U.S. death toll surpasses 50,000 and the confirmed cases exceed 1 million, it is imperative to reflect on the appalling amount of misinformation that has aggravated those numbers.

The cardinal institutions that, above all else, must be credible and dependable in times of hardship are the government and the media, who distribute the government’s guidelines. However, both the government and media must base their actions and reporting on the wisdom of the science and academia communities. Here lies the biggest disconnect: Neither has been willing to listen.

Since the beginning of the coronavirus spread, experts have recommended at least six weeks of strict social distancing. Many state governments have renewed their stay-at-home orders until experts are confident the curve has been flattened. But some states, like Georgia, have already begun to allow some (arguably non-essential) businesses to reopen.

The federal government has taken the epidemic more seriously than states like Georgia. But the president has been guilty of spreading information not backed by experts, such as the suggestion at a recent press conference that disinfectants and sunlight might kill the coronavirus.

Because words have consequences, poison control reported a spike in calls following the president’s remarks. In cases like these, those who listened to the government were spurned because he recklessly spoke.

The president has even encouraged disobedience to governments extending their orders, advocating for Americans to “liberate” their states. Resulting protests from disgruntled Americans worry experts that the assembly would exacerbate the spread of the virus.

It is clear without unity in the government, these conflicting approaches will confuse and misinform Americans.

The media should also be held responsible for the circulation of bad information. In the early days of the epidemic, Fox News used its platform to argue the seasonal flu would be worse. This myth perpetuates still today even as COVID-19 has spread and killed at a much faster rate.

The New York Times faced criticism for a tweet regarding the president’s comments on disinfectants because it did not decisively side with the experts. Instead, it made the disagreement between disease specialists and the president look like a dilemma.

Media outlets have only channeled the government’s mixed messaging and abetted it with panels of unchecked pundits disagreeing.

It is not the people’s fault. They rightfully expect error-free information from the media and government. However, the difference in reactions among certain groups — protests versus adherence to social distancing — reflects a failure among these important institutions to back credible experts. This whole ordeal could have been suppressed had a coordinated and truthful campaign by the medical community not been undercut.