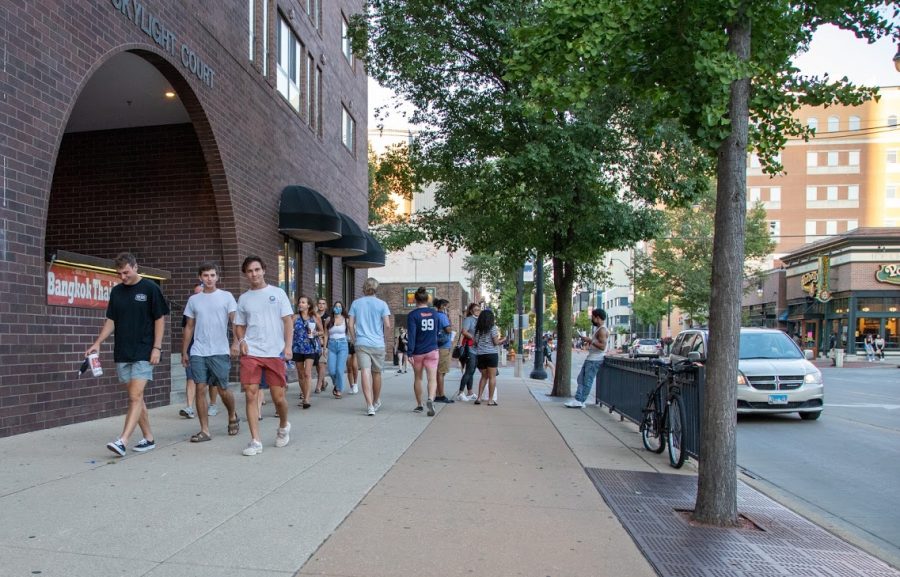 A group of students walk down Green Street without masks on Aug. 21. More than 1,200 people have tested positive for COVID-19 in the first two weeks of school.

With another 104 cases last Friday, University saliva tests identified 1,242 cases of COVID-19 on campus during the first two weeks of classes.

Testing during Labor Day weekend was also relatively light: 2,609 tests on Saturday was the lowest count since Aug. 16. Weekend testing 37 new cases on both Saturday and Sunday, then 47 on Monday after around 12,000 tests in the same three days.

The University has found 1,645 unique cases on campus since move-in began on Aug. 16, and over 1,738 since the saliva tests were introduced in early July. More than 244,000 saliva tests have been conducted as of Labor Day.

According to estimates from Champaign-Urbana Public Health District’s Awais Vaid, about 95% of on-campus cases have been found in undergraduate students.

The University student body began its second week of restricted movement on Wednesday. After a glut of 429 new cases from Aug. 31-Sept. 1, University officials imposed a ban on nonessential activities.

The mayors of Champaign and Urbana followed suit, extending the on-campus indoor dining restrictions that were set to end on Labor Day. Patrons cannot dine indoors at Campustown bars or restaurants until Wednesday at 5 p.m.

One student was suspended for attempting to fake the display of the Safer Illinois app, and as of Sept. 2, over 100 other students face University discipline for disobeying COVID-19 restrictions.