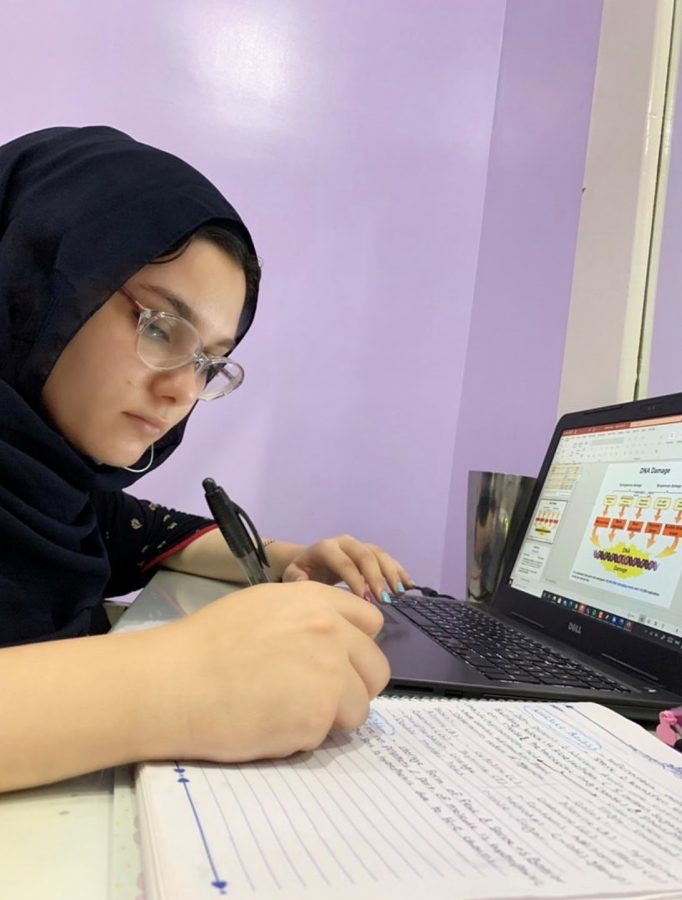 Sarah Kishta looks over lecture slides at 2:15 a.m. from her home in Zagazig, Egypt. Kishta has had to adapt to virtual classes through a seven hour time zone difference.

Rather than enjoying a normal senior year on the University campus, Sarah Kishta attends virtual classes from Zagazig, Egypt, a time zone seven hours ahead of Champaign, Illinois.

“I had to flip my sleeping schedule to keep up with my deadlines and homework and also be able to keep track of everything,” Kishta said. “In the Egypt time zone, my classes start from 4:30 p.m. to 12 a.m.”

According to the University’s newest numbers, 576 fewer international undergraduates chose to continue their enrollment at the University of Illinois at Urbana-Champaign this fall.

For the remaining international undergrads, the COVID-19 pandemic has created myriad challenges, ranging from time difference adjustments to social sacrifices.

Jiwon Lee, sophomore, resides in Daegu, South Korea. Lee had to also adjust her sleeping schedule due to a class that meets twice weekly at 4 a.m. Korean Standard Time.

“Not physically seeing anybody makes it hard to put yourself out there and makes it much more difficult to make friends,” Barghouthni said.

Despite the social and academic struggles that arose due to the global pandemic, some international students find returning to campus next semester unlikely with rising COVID-19 cases in the United States.

When Lee first heard the news, she worried over the increasing COVID-19 cases in the U.S. and feared a mandated return.

Lee was grateful for the lawsuit filed by universities all over the country that resulted in the retraction of the policy which she said “gave freedom for international students to stay safe and take their courses online.”

While students like Lee feel secure staying home, other students, like Kishta, are hopeful that circumstances will get better and they will be able to return to campus in the spring.

“I will mainly focus on my internship to be able to graduate, but I am also willing to live some memories I didn’t get to experience as a senior.” Kishta said. “I would like to explore campus and places that I never had the chance to go to before.”