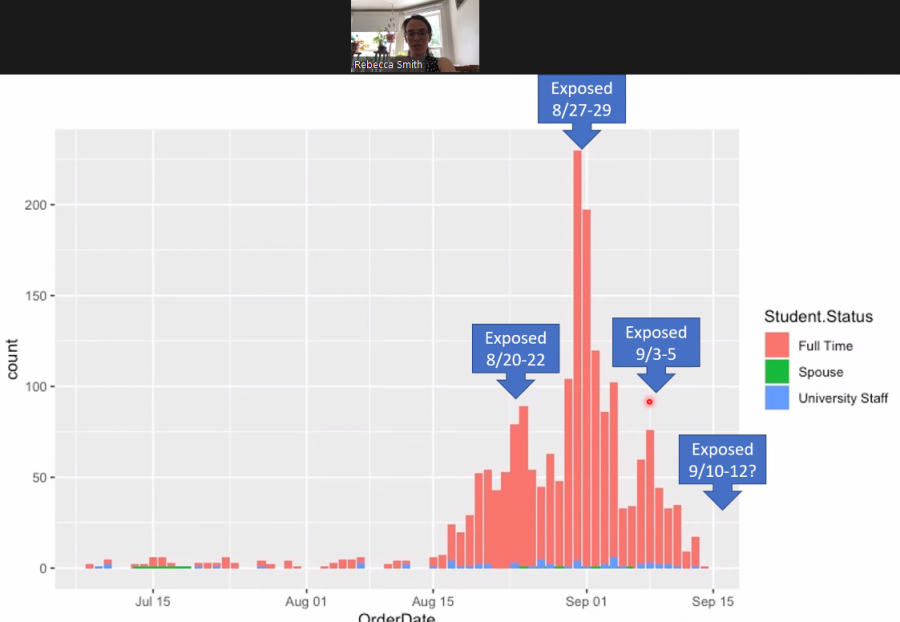 Rebecca Lee Smith, professor in AHS at the University, explains the recent peaks in COVID-19 cases. She shared the data during a Senate Executive Committee meeting on Monday.

New data displayed at Monday’s University Senate meeting revealed two trends about the on-campus spread of COVID-19: spikes in cases correlate to weekend exposure, and most of the spread is taking place in off-campus housing.

Rebecca Lee Smith, professor in AHS at the University, showed how the peaks of new cases on campus — around Aug. 25, Aug. 31 and Sep. 8 — came almost exactly one week apart from each other.

Given the virus’s incubation period, these upticks in cases all correlate to weekend exposure, Smith said. Likewise, any spread from last weekend would appear in tests conducted from Monday to Wednesday.

While new cases in dorms and Greek life were reigned in within a week of the late August-early September spike, cases haven’t fallen as quickly in off-campus apartments.

Some behind the University’s testing efforts were worried the drop in cases was from a lower proportion of undergraduates getting tested, but this data shows genuine student improvement, said physicist and lead modeler Nigel Goldenfeld.

“We are cautiously optimistic about the way things are going,” he said.

As for the student restrictions lifted Wednesday, Goldenfeld said it’s too soon to make a plan for the rest of the semester.

“It depends on how we relax the measures that we’re currently taking,” Goldenfeld said. “And so we will obviously be analyzing these data in the next day or so, and coming to some conclusions as a team about what is the right way to do this.”

Smith said University modelers are looking to obtain data from Champaign-Urbana Public Health District on where students are getting exposed to the virus, instead of where exposed students live.

CUPHD does all contact tracing in the county, which Goldenfeld acknowledged as the primary mitigation strategy. The Safer Illinois app is “icing on the cake,” he said.

“The app is tuned only to provide an exposure notification only if it’s longer than two hours,” Goldenfeld said. “If made shorter, it would deliver a huge number of false positives. That would make people ignore it.”

“During the isolation and quarantine period we know it’s tough for students to stay in a room for 10, 14 days,” said Danita Brown Young, vice chancellor of Student Affairs.

Young said Student Affairs employees are making daily phone calls to students in the residence halls and informing them of their dining and healthcare options.

Her department will be rolling out an “isolation and quarantine box,” with things like cards, bath pillows, puzzles and games to keep isolated students occupied.

Additionally, a new wave of random prizes are coming to students who behave within the University’s COVID-19 guidelines, University spokesperson Robin Kaler said.

Kaler mentioned one of the incentives: the chance to do a TikTok with Chancellor Robert Jones.

Young gave special mention to the Interfraternity Council and other Greek organizations for their cooperation in cutting in-person activities.

“Everyone has really been trying to play their part and do their job or role, and students have really stepped up to hold those students accountable,” Young said.