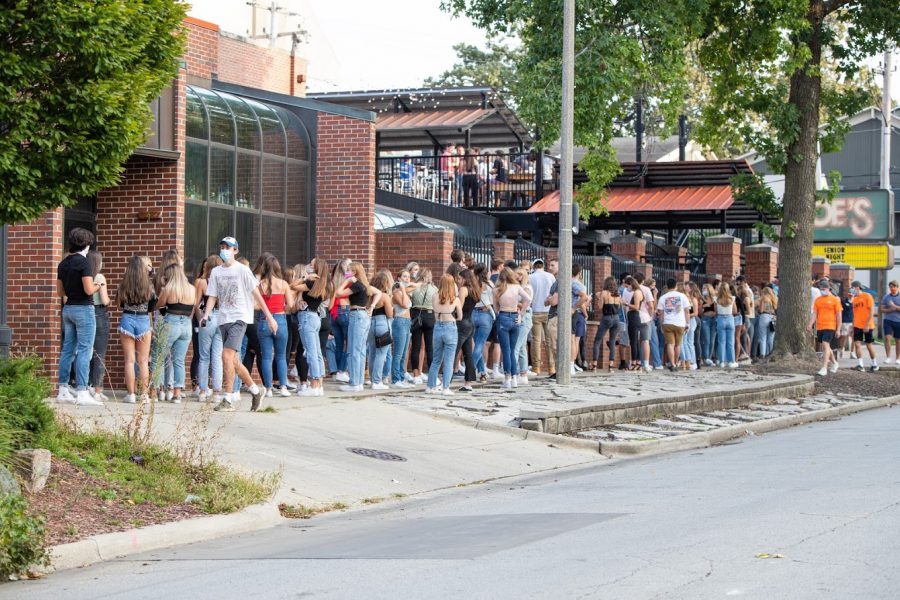 Students fill the sidewalk outside of Joe’s Brewery waiting to enter on Thursday afternoon. The line stretched from the front gate to Potbelly Sandwich Shop on Fourth street.

On Sunday, the Champaign-Urbana Public Health District confirmed another 69 cases of COVID-19 from 10,279 new tests.

Another 111 people were reported recovered by CUPHD, bringing the county total to 382 active cases.

CUPHD reported 8 hospitalizations, the same as Friday and Saturday.

ZIP code 61820 is Champaign County’s biggest contributor to the pandemic: 198 of the active cases reside there, and there have been 1,988 confirmed cases there.

The ZIP code 61822 encapsulates the area within I-74 on the north, Prospect Avenue on the west, Windsor Road on the south and Wright Street on the east, covering most of Campustown.

As of Sunday, 4,281 people have tested positive for COVID-19 in Champaign County. Of them, 3,879 are considered recovered, eight are currently hospitalized and 20 have died.

The county has conducted 431,519 tests for the coronavirus since the pandemic began. Over 64% of all county tests have been done on people between the ages of 10 and 30 years old.

CUPHD reports breakdowns of cases and tests by race. According to their webpage, 62% of people who’ve tested positive in the county are white, 15% are African American, 5% are Asian, 16% are “Other” and 1% are unknown.

By ethnicity, 16% of people who’ve tested positive identify as Hispanic, but only 2% of the tested population is Hispanic.

Other cases to tests disparities exist in racial demographics. Asian people represent 5% of cases despite comprising 18.1% of tests, while African Americans comprise 15% of cases in the county with only 8.2% of tests.

The Illinois Department of Public Health reported a higher case count for Champaign County: 4,330, up 10 since Saturday. Unlike CUPHD, which confirms each new case before reporting it, IDPH directly reports all positive test results from campus and the county.