New cases continue to decline in fourth week of class; 2,000 cases since move-in 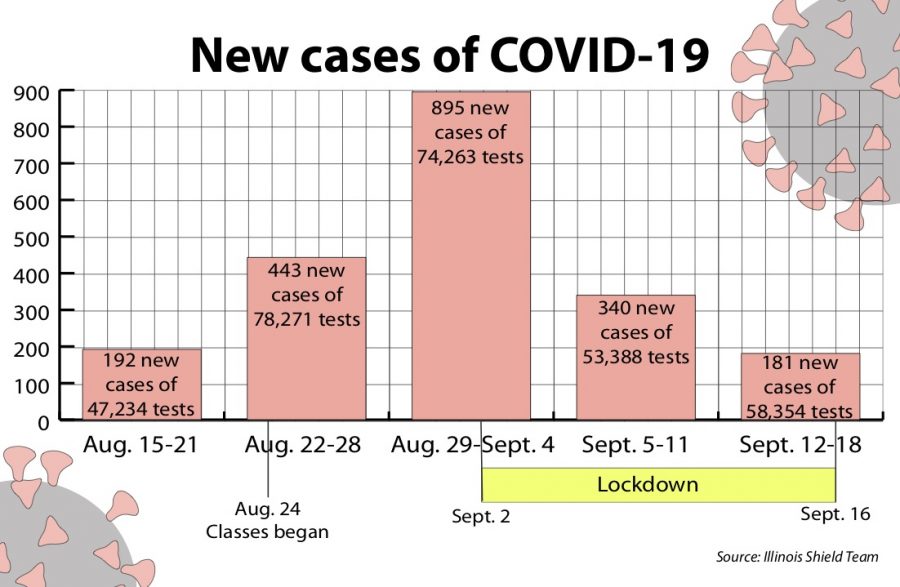 University officials attribute the drop in new cases to the two-week stay-at-home order issued by Chancellor Robert Jones on Sept. 2, when students were restricted to only essential movements.

At the beginning of each week, there is a bump in cases that University researchers believe comes from partying and community spread during the weekend prior. It’s a good indicator of how many unsafe gatherings occurred among students.

As such, Mondays and Tuesdays typically yield the highest case counts of the week. In week two, 429 new cases were found in those two days. In week three, 150. Last week, there were just 85 new cases found from tests done on Monday and Tuesday.

Total tests have also declined since week two of classes when over 74,000 COVID-19 tests were conducted on campus. Since over 95% of cases have been found in undergraduate students, the University changed testing guidance for lower-risk populations on campus.

Now, University faculty, staff and graduate students are only required to test once a week. Meanwhile, some students who are considered to be high-risk for the virus have been ordered to test three times a week.

Since saliva tests were introduced to the community on July 6, over 344,000 tests have been conducted on campus and 2,138 COVID-19 cases have been identified from them as of Friday.