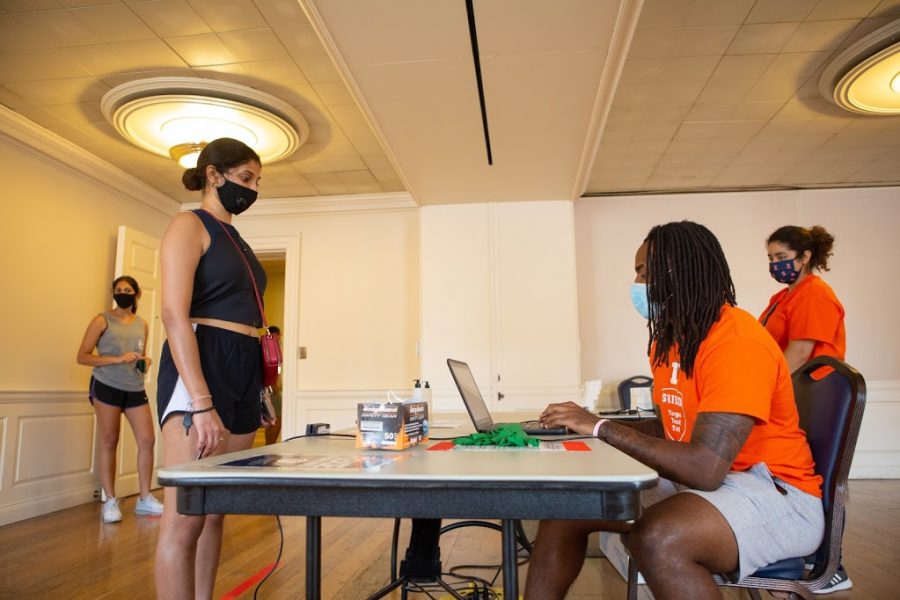 Aisha Shekara checks into the COVID-19 testing site at the Illini Union on Aug. 23. The University has now conducted over

Aound 5% of all people who have tested on the University campus have tested positive for COVID-19, according to figures shared by University spokesperson Robin Kaler on Friday.

According to Kaler, 48,605 students, faculty and staff have tested with on-campus saliva tests since they were introduced on July 6.

With 2,362 cases identified as of Friday, around 4.86% of all campus testers tested positive for COVID-19.

The infection rate among the current campus population is likely higher. Kaler said around 38,000 people are testing on the UI campus every week, while about 35,000 students are living on and around campus.

“Faculty and staff who come to campus must participate in testing, but we don’t track where they live,” Kaler said in an email. “We don’t track how many are coming to campus, but by the testing numbers, I’d guess about 3,000.”

Awais Vaid of the Champaign-Urbana Public Health District previously said over 95% of all campus cases have been from undergraduate students. If that figure holds, at least 6% of on-campus students have tested positive for COVID-19.

The on-campus spread of COVID-19 continued last week, with a higher count of new cases than the week previous.

For the week ended Friday, 225 new cases were identified from almost 60,000 campus tests. The week prior, campus found 181 new cases from 58,000 tests, driving down the new case positivity rate significantly.

The University’s two-week restrictions on undergraduate students helped to curb an alarming spike in cases at the beginning of September, when almost 900 people tested positive for the virus in a single week.

Officials at the University have said virus spread is mostly limited to off-campus properties for the time being.