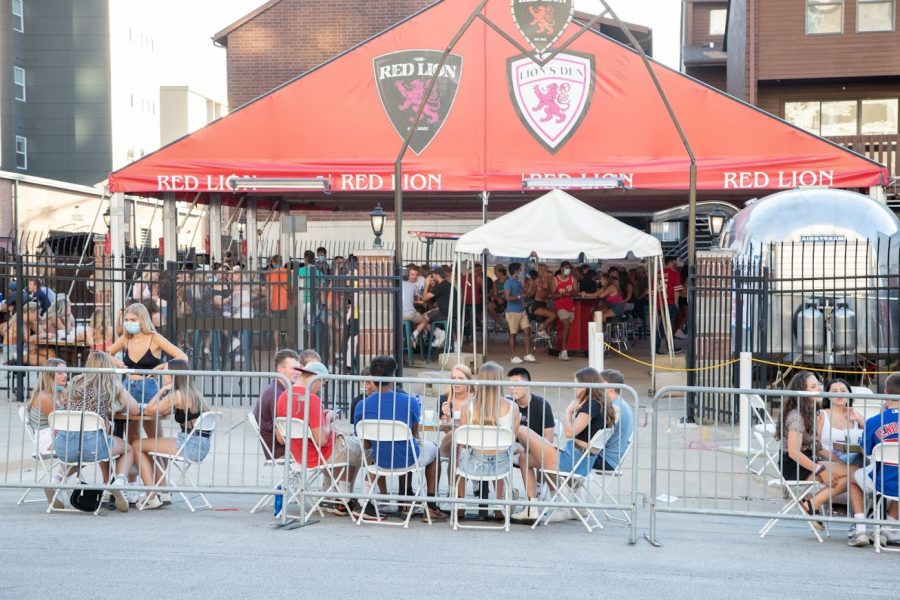 Students socialize at the Red Lion bar on Aug. 21. Sixty-three students are currently on probation for violating COVID-19 guidelines. Students in photo are not necessarily involved with probation.

Since the semester began, the University has issued decisions on 297 cases of COVID-19 related student behavior. In 58 of these cases, the respondent was not found responsible or the charges were dropped.

Of those found responsible, 63 students are on probation, one has been placed on dismissal held in abeyance status and 15 have been dismissed, according to Stephen Bryan, associate vice chancellor for student affairs and dean of student support and advocacy.

Two weeks ago, just one student had been dismissed for a COVID conduct violation.

The Office of Student Conflict Resolution must now assess every reported case of a social distancing rule-break.

“The student discipline system utilizes an educational approach, and each case is examined individually,” Bryan said in an email on behalf of himself and Vice Chancellor Danita M.B. Young. “Decision-makers consider a wide variety of factors, including but not limited to the nature of the behavior itself, the impact of that behavior on others, the explanation of that behavior, and the extent to which the respondent has reflected on their actions.”

According to the Office of Conflict Resolution website, the office has the following options when determining whether a respondent has violated a University policy: finding no violation, charge(s) dropped and finding of violation.

The formal sanctions for a student conduct violation are as follows:

University reprimand, where a student carries an entry in their disciplinary record for a year that serves as a basis for further sanctioning;

University censure, an official communication that the student’s behavior is inappropriate as a member of the academic community and an entry in the disciplinary record until the student graduates;

conduct probation, where the student is no longer in good standing with the academic community and can be dismissed or suspended if another rule-break happens while the student is under probation;

suspension, meaning that the student’s relationship with the University must be terminated for a definite amount of time;

dismissal, in which the student’s relationship with the University is terminated. The student may petition for readmission after a specified period of time.

“No students have been suspended through the student discipline system (for COVID-19 violations) — but note that a dismissal, like a suspension, is separation from the University for a period of time,” Bryan said.

However, there have been interim suspensions in the past, which are issued by the Chancellor.

When the subcommittees decide to hold a punishment “in abeyance,” they’re deciding that the sanction is the appropriate course of action, but the circumstances of the case cause holding the formal sanction in a state of temporary suspension. The student may continue enrollment under certain restrictions, per the student code.

For party violations, Bryan said that “attendees also face disciplinary actions, but the outcomes for the host are likely to be more severe than the outcomes of attendees.”

The Daily Illini spoke with a student that is currently under a year-long probation period for holding a social gathering. Due to the student’s disciplinary status and fear of retaliation, The Daily Illini granted anonymity for the student.

The student held a party at his apartment, which led to a resident of a nearby apartment complex to call on campus party patrol.

“There were seven of us; I didn’t think it was a big deal,” the student said. “We got a little loud and party patrol came. They saw the people in my apartment. They just told me to lower the music down and that this was just a warning.”

Two days later, an email communication from a student conduct coordinator was sent to the source informing him that his case was under investigation. After a phone interview, the decided disciplinary action was a year-long probation period and an entry in the student’s transcript for graduate school applications, because the gathering did not follow social distancing guidelines.

The student said he did not know social distancing and mask-wearing rules applied to gatherings under 10 people.

“The people wore masks outside of my building and through my building once they entered the door,” the student said. “I checked their (Safer Illinois) apps once they entered the door to make sure that they all got tested, which they all did. I thought, when you go to a campus restaurant, and you sit down with a group of friends, you’re allowed to take your mask off.”

The student wrote a letter of appeal, which is a student right described in Section 3.01 of the Student Conduct, under the grounds that the punishment was not fit for the violation.

Student appealers must base their appeal exclusively on one or more of the following grounds: procedural irregularity, new evidence that was not reasonably available at the time the determination, a conflict of interest or bias from the conduct subcommittee toward the appealer or the punishment imposed were not appropriate for the violation found.

For anyone reporting on-campus COVID violations, Bryan recommends that the reporter discloses his or her identity because most actions are severely limited if the reporting party uses an anonymous reporting method.

The University prohibits retaliation against anyone who reports a violation, he said.

“Students have a right to confront the evidence against them, so if the reporting party desires that disciplinary action be taken as a result of their report, they should understand that requesting confidentiality limits the degree to which the University can respond through the disciplinary process,” Bryan said.

*To protect the privacy of the student that spoke about their experience in hosting a gathering, The Daily Illini granted anonymity to the source.