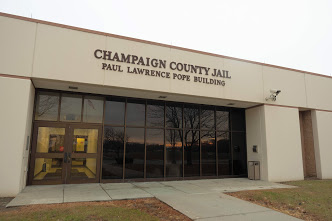 Despite a pandemic that’s disproportionately infected those in jails and prisons, the Champaign County Jail managed to avoid COVID-19 early on.

According to Sheriff Dustin Heuerman, they had identified five inmates that had the virus before they were arrested and brought to jail. In addition, while the jail population capacity is 295 individuals, the current population is 141 individuals as of Oct. 5, down from over 180 inmates in mid-March.

The pandemic has revealed the overcrowding situation prisons are facing. According to a study conducted by Johns Hopkins University and UCLA in July, incarcerated people are five times more likely to be infected by the coronavirus. The death rate for the incarcerated is higher as well, at 39 deaths per 100,000 compared to a citizen’s 29 deaths per 100,000.

“From the onset, we reduced movement of inmates and took other steps to keep COVID out of the jail as much as possible,” Heuerman said. “This included a major examination of those in custody and an increase in officers writing Notice to Appears in lieu of physical arrests when possible. We also instituted a 14-day quarantine policy for all new inmates upon entry to the jail.”

With these new precautions, the Champaign County Jail was able to avoid the spread of the virus to its general population.

According to Heuerman, in 2019, a total of 5,505 people were booked into the Champaign County jail with an average length of stay being 15.37 days. He also said the top five most common causes for arrests in 2019 are driving with a suspended or revoked license, domestic battery, having an out-of-date county warrant, driving under the influence of alcohol and retail theft.

As crime increases in our country, Champaign County’s crime has also been increasing.

“There is more crime than I would like to see in our community, but I wish we didn’t have crime at all,” Heuerman said. “Every time I see crime is increasing, I’m reminded that it is increasing in other jurisdictions, too, so an increase is not unique to our area. For example, shooting incidents are up in Champaign County as a whole, but they are also up in other counties in central Illinois and across the state.”

In order to mitigate this, the Sheriff has bigger goals for himself and for his community. Heuerman hopes to rehabilitate incarcerated individuals so that they leave the prison better than they came in.

As a result, the Champaign County Jail offers programs and support. Some of the programs offered are anger management, mindfulness training, parenting class, GED, Bible study and even a movie critic discussion. Potential programs for the future include food and nutrition, business class, writing class and a few others.

However, at the moment, mental health workers have been working out of closets and only one classroom has been available for these mental health programs, Heuerman said.