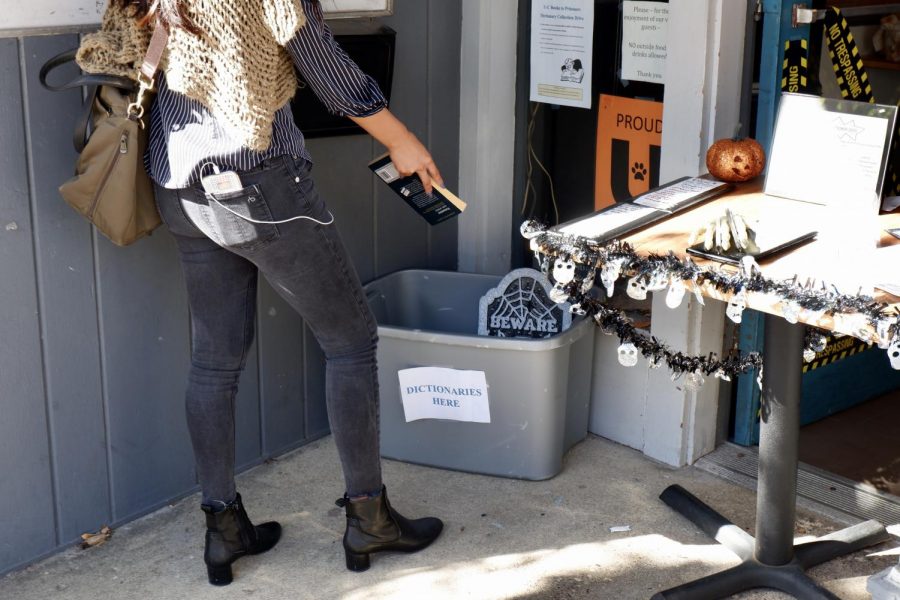 A person deposits a dictionary into a dictionary drive box outside of the Dancing Dog Eatery & Juicery on Sunday afternoon. The Books to Prisoners drive hopes to provide dictionaries to prisoners in Illinois.

Because of the COVID-19 pandemic, the difference between the amount of dictionaries requested by incarcerated people and the amount received has been exacerbated severely.

To combat this growing issue, Kate Shanks, sophomore in LAS and volunteer with UC Books to Prisoners, organized a community-wide dictionary drive running during October where individuals can donate new or slightly used paperback dictionaries to be sent to correctional facilities in Illinois.

According to Shanks, individuals in the Champaign-Urbana community can become involved in three ways: purchasing a dictionary through the Amazon wish list located in the Dictionary Drive for U-C B2P Facebook page, donating at one of the five business locations that agreed to serve as drop-off sites or sharing the Facebook event on social media platforms.

The five C-U locations that agreed to serve as sites for drop-off are Insomnia Cookies, Dancing Dog Eatery and Juicery, Common Ground Food Coop, Jane Addams Book Shop and the IDEA Store. The process to select these locations was quick and based on how progressive and small the organizations were.

“I just reached out to a few that I thought would be receptive and that I knew had more progressive values, so we just popped the totes in, made a couple flyers to circulate, created the Facebook page and got launched in about a week,” Shanks said. “The businesses we selected are also small, not like Walmart where you’re going to have a higher likelihood of running into people, so there is a better opportunity to maintain social distancing.”

Because many inmates are simultaneously engaged in academic pursuits, such as studying for the GED, dictionaries are a valuable resource that allow them to strengthen linguistic skills. Through this, they are able to better communicate with and understand fellow inmates.

Shanks is working alongside UC Books to Prisoners, an organization that provides books to Illinois inmates at no cost, to organize this event and attributes its creation to the impact COVID-19 has had on the organization.

“I remembered that when I was there, they constantly had a shortage of dictionaries, and I knew that they couldn’t do their usual fundraising this year because of the pandemic,” Shanks said. “So I thought of this.”

The events UC Books to Prisoners has been unable to host include its annual fall and spring used book sales, as well as its large public volunteering sessions because of the limited capacity of the Urbana-Champaign Independent Media Center basement, according to Rachel Rasmussen, volunteer coordinator of Books to Prisoners.

The organization is no longer able to accept book donations from the public at their own location because it would pose a risk to elderly workers who organize the donations.

However, Books to Prisoners is continuing its work by allowing groups of four individuals to volunteer.

“It felt really important to continue because we know that incarcerated people would suffer most,” Rasmussen said. “They would be locked down, which means they would spend 23 out of 24 hours in their cells, whereas before they could have gone to the cafeteria to eat.”

At this point in time, the dictionary drive has accumulated over 40 dictionaries and estimated to reach over 160 by the end of the month. These dictionaries will be distributed to correctional facilities in Illinois through Books to Prisoners based on letters and requests received.

“The incarcerated will write to us and the dictionary will be sent to whoever asks for one and for whoever hasn’t had one in the last five years,” Rasmussen said. “We get on average 180 to 200 letters a month.”

Through this drive, both Shanks and Rasmussen hope to meet the prisoners’ demonstrated need for dictionaries in Illinois.

“The mission of the dictionary drive is to get into their hands the tool that they ask foremost to change their lives, to better their lives,” Rasmussen said.