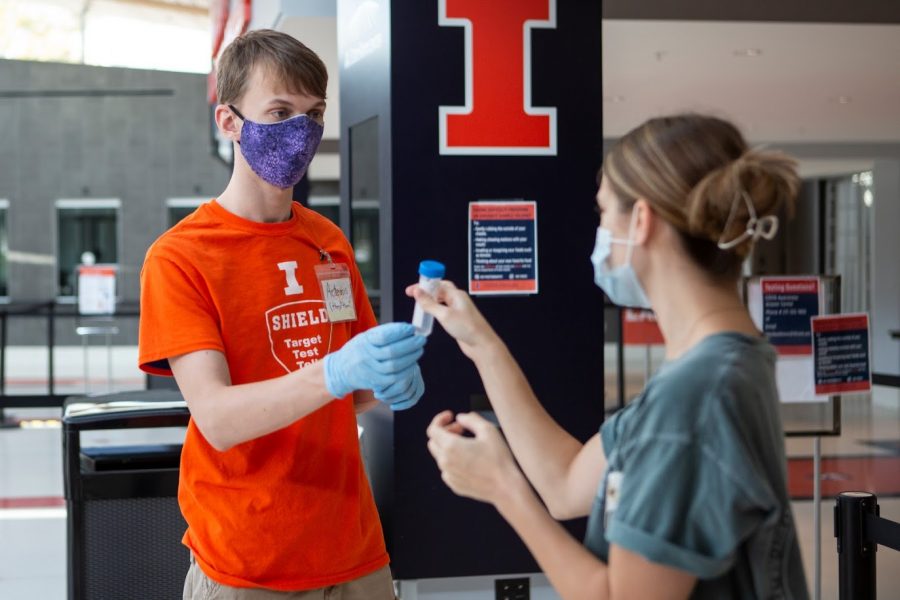 Region 5, which takes up much of southern Illinois, has moved into increased mitigation with the temporary closure of indoor dining and bar service and limited gatherings after hitting a seven-day rolling positivity rate of 9.1%.

Regions 7 and 8 have both crossed the 8% threshold where additional restrictions may be at play.

Without UI’s tests, the region has had a sustained increase of COVID-19 rolling average test positivity for 14 days straight, all the way up to 7.6%.

Meanwhile, the last week was one of encouraging lows on campus for the spread of COVID-19, featuring the lowest single-day and single-week new case counts of the semester.

On Saturday, after 3,666 tests, the University found just two new cases of COVID-19, followed by six on Sunday. The last time on-campus saliva tests found such a low count was Aug. 10, before most students had moved back to campus.

For the week ended Sunday, the University totaled 74 new cases, 63 fewer than the previous week.

Monday’s count of 18 new cases was also a low for all Mondays during the semester. UI modelers and epidemiologists agree that cases on Monday and Tuesday are a good indicator of how much socializing occurred the previous weekend.

Since saliva testing began in July, the University has conducted almost 600,000 tests and found 2,800 individual cases of COVID-19 month.

Tuesday marked a low for Champaign County as a whole, with just six COVID-19 cases confirmed after 5,868 newly processed tests.