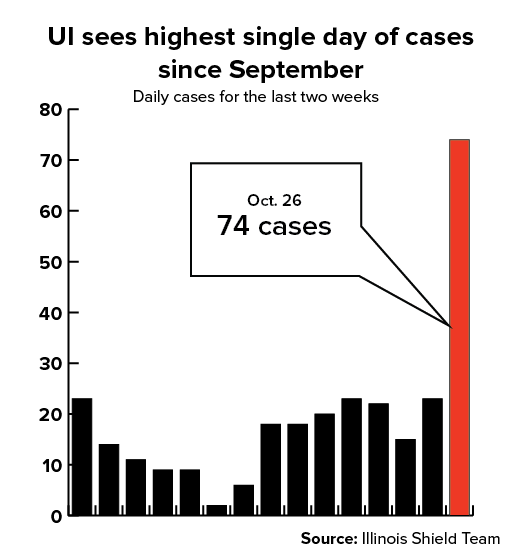 After a couple of weeks of low new caseloads, the University of Illinois is seeing a resurgence of COVID-19 on campus. Monday’s 74 new cases were the highest single-day total since Sept. 8, back when Chancellor Jones’s stay-at-home order for undergraduates was still in effect.

That’s as many new cases as there were for the entire week ended Oct. 18.

Monday’s spike comes as Illinois, and the nation is pummeled by a new wave of COVID-19 cases, hospitalizations and restrictions.

On-campus, the spike could’ve come from several factors. The Illini football team played its season opener on Friday, and resulting on-campus gatherings may have contributed to the spread.

With temperatures hitting the 40s last week, many students and staff are spending more time indoors, where infectious people can more easily spread the virus.

Either way, the bump in new cases comes at a critical time for the University community, as C-U tries to control the spread before sending tens of thousands of students back home for fall break in three weeks.

Since the on-campus saliva testing program began in July, there have been 650,000 tests conducted, and just under 3,000 cases of COVID-19 identified as of Monday’s results.

More than 2,900 of those cases were found after Aug. 15, when students moved back to campus en masse and the University ramped up its testing volume.

The state is divided up into 11 regions in Illinois’ COVID-19 response plan. Whenever a region surpasses certain resurgence criteria, all counties within it may be subjected to additional restrictions on movement and behavior.

Champaign County’s region, Region 6, had its seven-day rolling test positivity hit 7.9% on Saturday. If the average positivity breaks 8% for a sustained period, the C-U area would have to abide by any additional restrictions the state-imposed, even though its weekly test positivity excluding UI tests hangs around 4.5%.

Meanwhile, Halloween gatherings pose a serious risk for superspreader events on campus and across the nation.

The C-U Public Health District has already issued guidance on how to trick-or-treat safely, but there’s a compounding factor: Illini football hosts Purdue on Halloween morning, which may lead to more gatherings and tailgates along with campus and community parties.