How sensitive is the UI COVID-19 test? Test developers explain 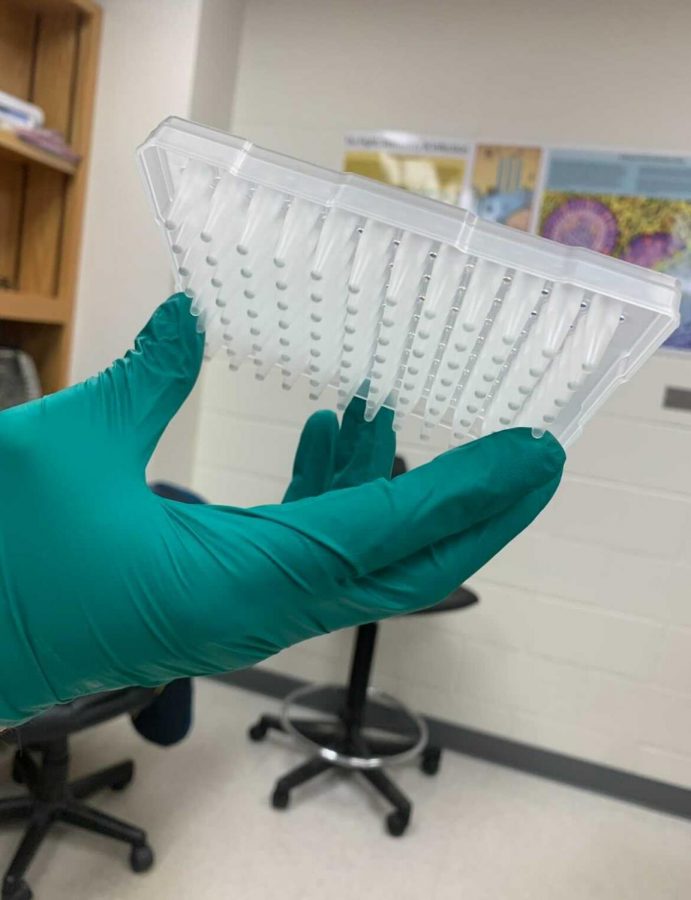 Fadi Al-Naji, co-developer of the UI COVID-19 test, showcases the plastic wells where saliva samples are submitted for analysis.

Julie Rodriguez, sophomore in LAS, enjoyed a bag of red hot Cheetos one early September morning prior to throwing on her mask, oversized sweatshirt and white slippers to head to a COVID-19 testing center on campus. After waiting in the short line, it was her turn to spit into a plastic test tube.

As Rodriguez stood over the bright orange stickers labeled “6 feet apart,” she panicked at the abnormal sight of the pink saliva filling up her tube. She realized the pigment in her sample was due to the Cheeto dust in her junk food breakfast and then nervously scanned the testing center, where every spot was filled, to see if any eyes were on her.

“I freaked out, but I continued to fill the tube because I had no idea what else to do,” Rodriguez said.

Since nobody else taking the test was looking, she attempted to nonchalantly place her pink sample amongst the others in the collection bin without mentioning the pigment. The person collecting samples noticed the color immediately, and she was asked to throw out her sample.

Rodriguez is one of the thousands of students at the University of Illinois whose daily routines have been uprooted to include scheduling in a COVID-19 test multiple times throughout the week.

About 1-2% of the total COVID-19 tests conducted in the United States on a daily basis are conducted at the University of Illinois in Urbana-Champaign, according to Illinois News Bureau findings in August.

Beginning an hour prior to the test, individuals can’t chew, drink, or even brush their teeth. Diana Ranoa, a biology research fellow who helped with the formation of this test, explained why this rule of no consumption during the time frame is especially important.

After people eat or drink, there is an increased presence of enzymes in their saliva, according to Ranoa. More enzymes could degrade the potential virus, which leads to an increased chance of a false negative, meaning that any food or drinks will have to wait until after the COVID-19 test.

After waiting in a usually short line at one of the 14 different testing locations on campus, individuals are asked for personal information before taking the test. They are then directed to a marked spot specifically placed six feet apart from other people around them also spitting in test tubes.

While staring down at these bright orange spots, they are required to fill three fourths of the bottom of the test tube up with spit and place it in a large blue tray before they exit.

One tray of test tubes is a “priority” tray that is designated specifically for people who have been exposed to somebody with COVID-19, have symptoms, and/or received an email in order to test three times weekly with priority standing.

Students living in a “COVID-19 hotspot,” (or an area where many others around them have been testing positive) receive an email to get tested more frequently with priority standing, said Robin Kaler, associate chancellor of public affairs. This way, positive cases are caught sooner. Students who live in areas with extremely low COVID-19 positivity rates are rewarded for their efforts to minimize the spread of the virus.

“The majority of students are being so good with testing that we actually use it now to find the places that have the lowest rates and actually deliver cookies to them to say keep up the good work,” Kaler said.

Rodriguez is one of the students who is “good with testing” for COVID-19, which is why she ended up taking another test at a different testing center an hour after her last testing incident. Before the second test, she stood over her bathroom sink and spit in it to make sure that her saliva was no longer pink.

“I knew I couldn’t go back to CRCE because I was super embarrassed and the same people would be there, but I still had to get tested,” Rodriguez said.

The saliva samples from each location are loaded onto trucks and transported to the Veterinary Diagnostics Laboratory at the University. There, a team of around 20 technicians work in eight hour shifts in order to process the influx of samples, according to Kaler.

Once Rodriguez’s Cheeto-free sample arrived in the veterinary diagnostic laboratory, it was heated immediately for 30 minutes in order to inactivate the potential virus. Saliva buffers were then added to the sample in order to balance the pH level and sample additives are added to make the virus easier to detect.

The saliva-based test developed by the University is unique in that it skips over an RNA extraction phase that traditional nasal-based COVID-19 tests usually include and instead analyzes it with a RT-qPCR (reverse transcription polymerase chain reaction) method.

This method makes the testing process quicker, more efficient, and less expensive compared to the usual nasal tests. Also, the scientists who developed the test noted that people are more likely to prefer spitting in a tube three times a week with the saliva test instead of getting a stick inserted up their nose with the nasal swab.

Through the University’s saliva-based method, extremely small wells in a plastic block are filled with different saliva samples and then the block is loaded into the real-time PCR machine for about an hour.

At the beginning of the test’s development, four scientists and technicians had to tediously fill each well manually by squeezing pipettes filled into the well and only had four PCR machines to do so.

Fadi Alnaji, a virologist who helped develop the test, noted that he is amazed at the automation of the test and how far it has technologically been able to progress.

“I didn’t expect at all that the development of this test would reach the level it has today, seriously,” Alnaji said.

Ranoa explained how now, scientists have “streamlined the process in order to do batch processing” by obtaining machines to assist in loading the wells as well six PCR machines in the lab that each process 380 samples per hour. This advancement drastically lessened the processing time of these samples.

While a sample is in the machine, the DNA of the sample is generated from the RNA through a process called reverse transcription. Scientists can then add fragments that are specific compliments to that of the viral DNA to the sample.

If coronavirus is present in the sample, the DNA marker labels will connect to the viral DNA. This connection would release a colored light-up dye, or fluorescent signal, that is presented to a computer screen which scientists then analyze.

Samples with no virus will generally present a flat line to the screen, meaning the sample is COVID-19 free. Samples with coronavirus will lead to amplification of the viral DNA and the release of the fluorescent signal that will show up as curves on the screen in real time.

Dirt or air bubbles in the saliva sample could affect how the machine picks up fluorescent dye in the sample, according to Ranoa. As a result, the sample could produce a false background curve.

In order for a sample to be considered positive, the curve has to cross a certain line which represents a threshold. This threshold is set higher in order to prevent false positives due to background curves.

Paul Hergenrother, a chemistry professor at the University and one of the main developers of the test, explained how “one needs to be very precise about reading out the amplification plots and making sure the plots are the right shape for a true positive.”

Hergenrother explained that scientists review the amplification plots of every result that comes back positive and make sure that they are consistent. This is to prevent a call for a false positive, which could “drastically change” someone’s life, according to Ranoa.

“If you’re positive you need to be isolated, you need to quarantine yourself. We don’t want to give a false positive call to a person and give them unnecessary stress,” Ranoa said.

After the data was processed in the lab, Rodriguez was alerted on her online student health portal as well as an application on her phone designed by the University that her test results were available. Luckily, the screen in the lab after her sample was processed presented a flatline and Rodriguez tested negative for COVID-19.