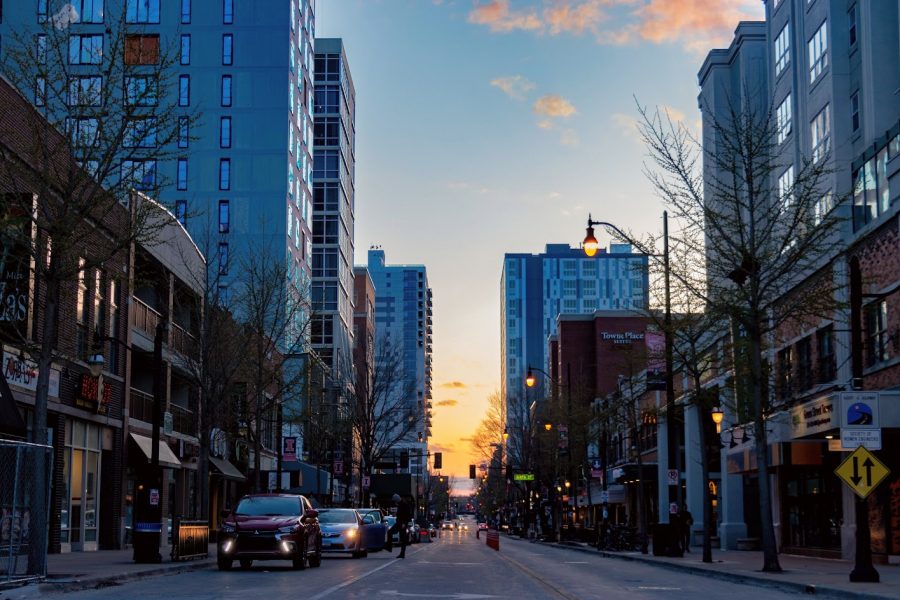 The sun sets over Green Street in Champaign on April 14. Another Champaign resident has died from COVID-19, bringing the death total to 107.

Another Champaign County resident has passed away after being infected with COVID-19, the Champaign-Urbana Public Health District announced on Wednesday.

This brings the county death toll from the virus up to 107, including 17 in the month of January.

The last three months have brought the lion’s share of the county’s death toll from the virus. In November, 35 county residents died from COVID-19, while another 27 died in December.

Meanwhile, 49 new cases of COVID-19 were confirmed in the county after 11,598 newly processed tests.

The number of hospitalized residents dropped by two, to 22, while 65 more people are considered “recovered” from the virus. The active case count is down to 639 people in isolation.

To date, more than 21,000 people in Champaign County have been ordered to quarantine after exposure. Of them, 2,482 have tested positive for the virus after exposure, while 837 are actively quarantining.

State and countywide test metrics continue to drop. According to the most recent data, the seven-day rolling average test positivity rate dropped below 5% in Champaign County, while Region 6’s positivity is at 5.3%.

Overall, Champaign County has found 16,061 individual cases of COVID-19 since the pandemic began, after 1.42 million tests.

Almost half of county cases — 7,919 — have come from people between the ages of 10 and 30 years old. More than half of the Champaign County residents who have died after contracting the virus — 57% — were at least 80 years old at their times of passing.