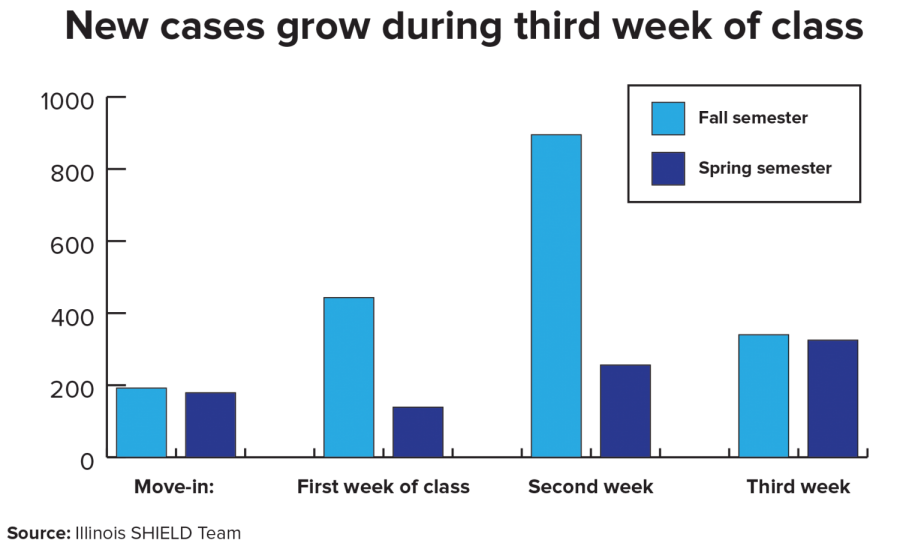 By this point in fall semester, more than 1,500 University students, faculty and staff had tested positive for COVID-19 in the last three weeks.

Undergraduate students were in the throes of an “essential activities only” lockdown to control rampant spread in early days of testing.

A spike that large, and that early, has been avoided so far in spring semester. But with cases still rising in the third week, and the infectious virus variant first identified in the United Kingdom now on campus, the next few weeks will be crucial to stymie another spike.

Here’s how semesters compare: by the end of the first week of fall classes, 443 cases in seven days—in spring, 139.

The third weeks, however, are remarkably similar. After a week of lockdown, 340 new people tested positive on campus in fall. Last week, 325 new positives.

This is not how campus officials expected to start the semester. University system president Tim Killeen said he expected 300-500 cases through the screening week and beginning of the school year.

Since Jan. 15, when students began moving back in, there have been 915 cases of COVID-19 identified on campus.

Almost 700 of those cases have come after classes began.

After the November-December surge in cases, deaths are catching up across the state and country. Ten people have died in the county in the first two weeks of February.

According to CUPHD, in November, 35 residents died from the virus. Another 27 passed in December, and 22 in January. Of all recorded deaths from COVID-19 in the county, 76% of them have occurred in November or later.

Hospitalizations in the county continue to drop. Thirty-eight COVID-19 patients are currently hospitalized in Carle hospitals, with 32 of them —including seven in the intensive care unit — at Carle Foundation Hospital. Two weeks ago, 73 people were hospitalized for the virus in Carle, with 14 in the ICU.

Test positivity in Champaign County and the surrounding Region 6, excluding the University’s saliva tests, is still hovering around 4%.

The county has processed 1,614,488 COVID-19 tests, while 22,928 have been ordered to quarantine after potential exposure to the virus.