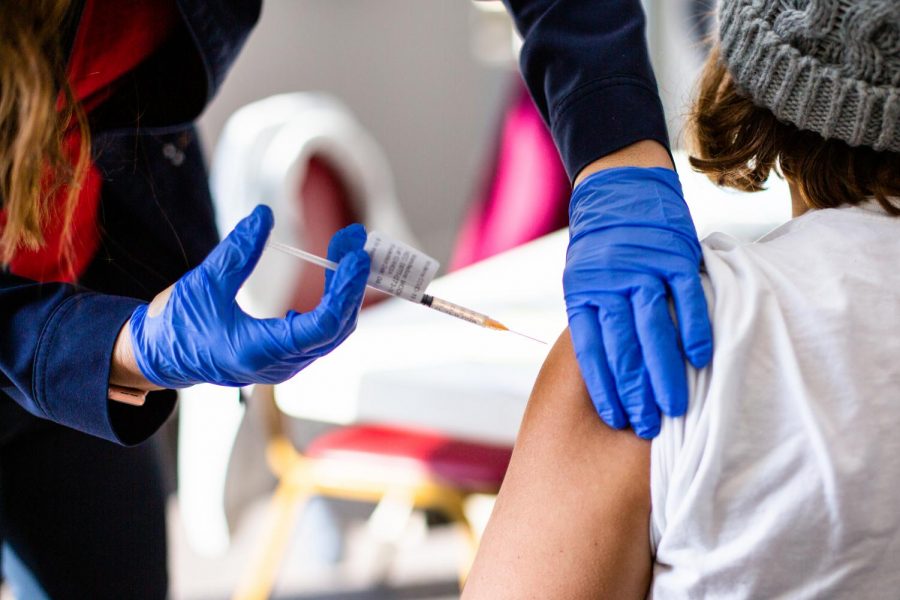 A woman administers a Moderna vaccine at the Church of the Living God on Feb. 20. Students are having mixed reactions on how the University of Illinois has responded to the pandemic.

Students have expressed different opinions and concerns regarding the University’s overall response to COVID-19, ranging from formal complaints to informal suggestions on protocol improvements.
Recently obtained complaints from a Freedom of Information Act request by CU-CitizenAccess showed that there were close to 600 complaints submitted through the University’s COVID-19 Enforcement Forms at the end of the fall 2021 semester.
As of Sunday, 6,309 new cases of COVID-19 have been reported out of 1,678,344 total tests processed by the University. The positivity rate is 0.38%.
Through these complaints, many students cited Greek life, large gatherings and lack of mask-wearing on public transportation as some of the reasons students felt unsafe on campus.
They also listed instances of people not being properly disciplined for violating COVID-19 guidelines as contributing to their discomfort. Despite the complaints, some students still reported that they generally feel safe on campus.
Olivia Lynch, sophomore in LAS, said that her experience with in-person classes has made her feel safe. She is currently taking an in-person class at Foellinger Auditorium, but with only around 20 people in order to ensure everyone is socially distanced.
She said that people on public transportation mostly wear masks, but some people wear them below their nose. In regards to fraternities and sororities handling COVID-19, Lynch believes the response could be more responsible.
“I think Greek life on campus is not dealing with the virus as responsibly as they should,” Lynch said. “I noticed they’re still hosting parties and going to bars often. I know that some have their own safety monitors, but I don’t think that’s enough.”
Noel Rivera, freshman in Engineering, has also heard about fraternities throwing parties on campus and noted that although he recognizes there is nothing he can do about it, he wishes that people followed guidelines more strictly.
“I think it’s messed up that you have a frat throwing a party with 100 people in a building and none of them will know if someone else has COVID or not,” Rivera said.
Different sororities and fraternity houses are responding to COVID-19 in different manners, according to Gillian Van Neck, sophomore in LAS. Van Neck is a member of the sorority Delta Zeta, where they are currently not allowed to have guests over.
“Given how the University has handled COVID, I think that within our own home, we should be able to be slightly more lenient and given that we are adults at this point, be able to make choices,”  Van Neck said.
Precautions Delta Zeta are enforcing include requiring sorority members to be spread out in dining halls and also requiring them to wear masks in common areas.
“It’s a little bit restricting in a way that’s maybe overkill, but I understand that it’s for our own safety and the safety of our house moms,” Van Neck said in response to these precautions.
When it comes to University Housing, masks are required in all common areas except when students are eating at the dining halls. People are also allowed into dorms but are limited to residents of the dorm.
“I find some of the rules a little hypocritical because you have to be six feet away from someone in order to eat if you’re outside a dining hall, but inside a dining hall you can be next to a group of four or five people and they’re not gonna say anything,” Rivera said.
Lynch, Van Neck and Rivera all reported that they feel comfortable with the way the University is requiring students to be tested on a regular basis.
“I think the testing and really requiring students to do it, especially with the Safer Illinois app, is genuinely a pretty good idea because it makes us all take responsibility and stay up to date on who around us is positive and who is not so we can quarantine,”  Lynch said.