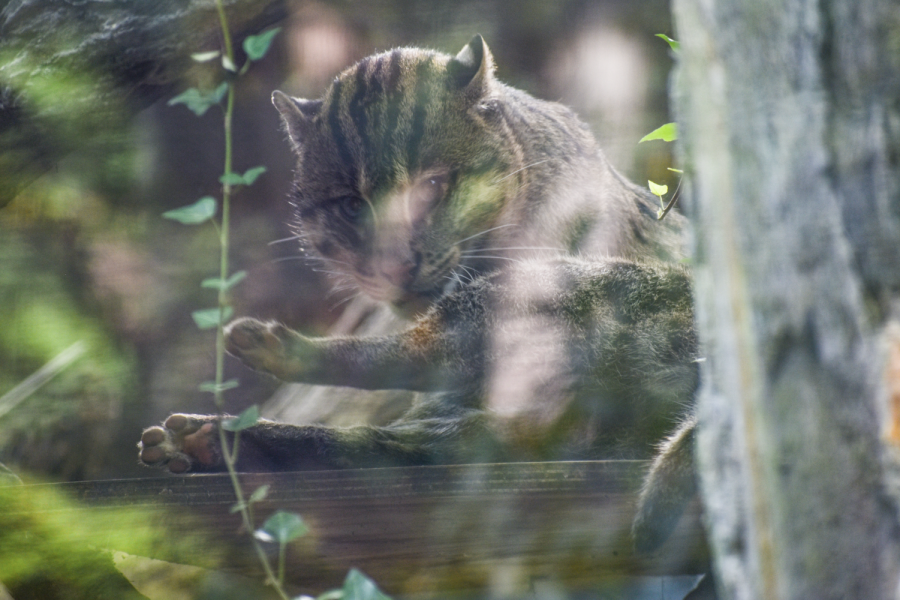 A South Asian Fishing Cat cleans itself at the National Zoo in Washington, DC on Oct. 15. University professors found COVID-19 in two more animal species located in an Illinois zoo: the fishing cat and the binturong.

Veterinary efforts across the nation have recently focused on and studied the way COVID-19 spreads and infects animal species. On Oct. 6, the U.S. Department of Agriculture’s National Veterinary Services Laboratories publicly confirmed that SARS-CoV-2 was detected in two animal species located in an Illinois zoo: the fishing cat and the binturong.

The detected samples were first tested and analyzed by Dr. Leyi Wang, clinical professor and veterinary virologist at the University’s Veterinary Diagnostic Laboratory. The process of detection differs from the traditional COVID-19 testing method in humans.

“We normally do the nucleotide acid extraction, and then we do the detecting or testing on the machine,” Wang said. “For COVID-19 testing for humans, we skip the extraction part.”

Another distinction between the testing performed for animals and the one for humans involves the substance being tested, according to Dr. Karen Terio, clinical professor and chief of the Zoological Pathology Program.

“Oftentimes, when we’re testing non-domestic species, we can’t get them to spit into a tube,” Terio said.

“The majority of cases Dr. Wang’s lab has been able to diagnose infection (in has been) from fecal samples because if you think about it, when you get sick and you cough, you cough up the virus from your lungs, and then you swallow it and it comes out in the feces.”

The Zoological Pathology Program, which is headed by Terio and based near Chicago, provides samples to VDL to be tested, according to Wang. After a sample is confirmed to be positive, it is sent to the federal lab for confirmation.

“Before they confirm our results, we are not allowed to share the data or the report,” Wang said.

Other species of animals that have been confirmed with the COVID-19 virus include gorillas and many types of wild cats, such as tigers, lions, snow leopards and pumas, according to Terio.

“One of the things that’s been really interesting is how susceptible wild cats have been, and some of them have been sick too,” Terio said. “That’s sort of in contrast to what they’re seeing in domestic cats. Wildcats seem to be more severely affected for some reason, and we don’t know why.”

While there have been cases that indicated transmission amongst animals, the initial infection is assumed to come from interactions with diseased humans.

“We presume that it’s coming from people, but we cannot always prove it,” Terio said. “Sometimes we don’t know exactly where it’s coming from because we don’t have any evidence of people who have been around the animal being positive.”

Wang believes this transmission is what makes researching and testing animal samples so important.

“That’s the reason why we test,” Wang said. “We have to take some strategy to control and avoid the spread in animals.”