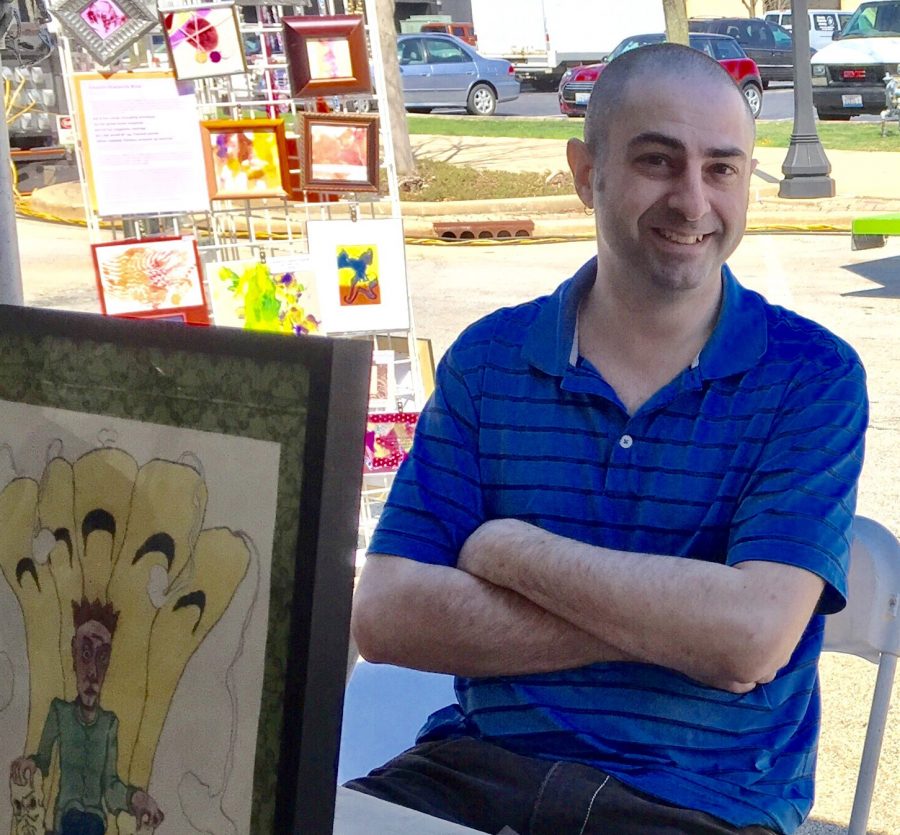 Elijah Griffin at Ebertfest 2016. For Griffin, Ebertfest is an opportunity to draw his colorful, otherworldly art

Every year at the University of Illinois College of Media’s Ebertfest, big names in the movie industry flock to the Virginia Theatre to be recognized for their work and festival-goers gather to watch thought-provoking films.

But what some may not realize is there is a group of people who attend Ebertfest for another special reason.

For Elijah Griffin, Ebertfest is an opportunity to draw his colorful, otherworldly art.

For Bev Schweighart, it’s a chance to sell her rustic, handmade cards.

For children and adults at the Swann Special Care Center, they get to show off their blackboard picture frames and wreaths.

And this year, these different groups of people will be honored for it.

The 2017 Ebertfest is dedicated to the Alliance for Inclusion & Respect, a partnership between local mental health and disability organizations. The Alliance, formerly known as the Champaign County Alliance for the Promotion of Acceptance, Inclusion and Respect, helps put on the arts and crafts sale stationed outside Ebertfest every year, where Griffin, Schweighart and the Swann Center group sell their wares.

Lynn Canfield, the executive director of the Champaign County Mental Health Board and Developmental Disabilities Board, said she and other members of the Alliance were thrilled by the honor.

“These issues touch everybody,” she said. “You look at the prevalence of mental illness in this country, it’s staggering and none of us are not touched. Whether it’s a family member, someone that we love or a roommate, it’s really there for all of us.”

“To have a venue where you can talk about it is probably even more satisfying than seeing a film.”

Chaz Ebert chose the Alliance for the dedication because it embodies the principles of empathy, kindness, compassion and forgiveness.

Canfield said these qualities perfectly align with the Alliance’s mission and celebrate the people doing this work.

“All of the organizations very strongly share those qualities,” she said. “I like being in a place where there is a ministry of people who care about other people.”

The organizations within the Alliance have been making the arts and crafts sale outside Ebertfest possible for at least five years. Canfield said they also sponsor a film each year that they believe will challenge the stigmas that often come with mental health and disabilities. This year’s film is “Mind/Game: The Unquiet Journey of Chamique Holdsclaw,” which is the true story of a college basketball player’s struggle with mental illness and the stigma surrounding it.

“(Attendees) are not coming out to be educated about disabilities. That’s not their purpose,” Canfield said. “So then to accidentally get educated about a disability or behavioral health disorder is great.”

When Nancy Carter, the co-president of the National Alliance on Mental Illness’ Champaign chapter, which is part of the Alliance for Inclusion & Respect, found out about the festival dedication, she said she jumped up, yelled and screamed.

“The cool thing about Ebertfest is that (people) want to see interesting films. They want to have lively discussions, and they want their eyes opened. And movies allow people to have discussions about all these hard things, like disabilities, mental illness, things that people don’t talk about,” she said. “That’s why it’s so cool they are actually dedicating this Ebertfest to those things. That’s a conversation that everyone should have.”

Carter hopes the festival dedication will encourage more people to attend the sale outside the festival.

“We are so used to talking about people who have disabilities and this is a really wonderful way to showcase their abilities and the people that participate are really, really grateful to get feedback about their artwork,” she said.

She added that she usually does all of her Christmas and birthday shopping at Ebertfest, since there is such a variety of jewelry, cards, art, photography and more in a range of prices from $1 to $100.

Canfield also stressed the importance of attending the sale.

“One thing that’s nice about art is that even people with very severe disabilities can communicate really effectively through art,” Canfield said. “They don’t need to have great verbal abilities to communicate effectively with art, and sometimes they are even more effective through art than people who can rely on other skills. They create some of the most beautiful, interesting things I’ve ever seen.”

Carter said she thinks this dedication is a great step to accepting people who are different, but it does not shock her that this is happening at Ebertfest.