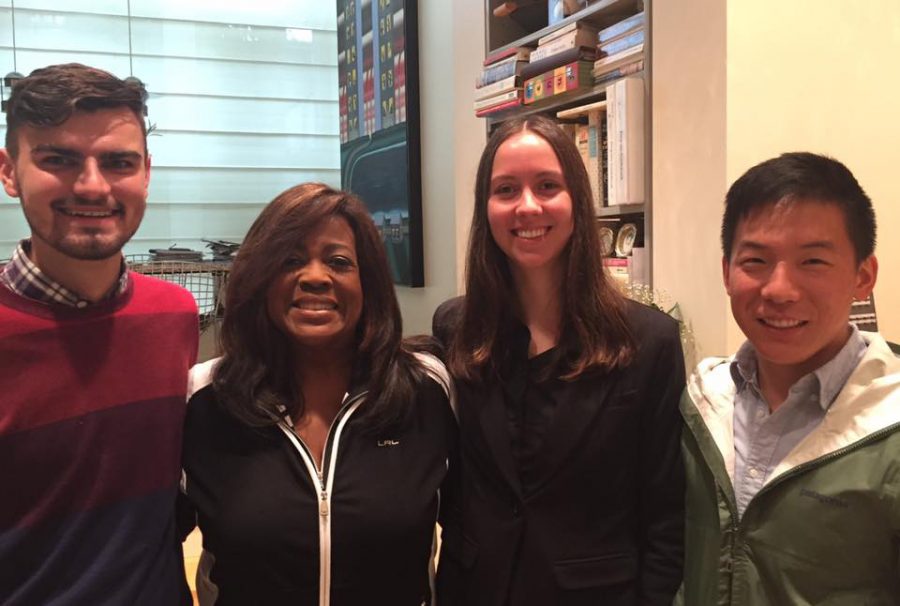 In the second year of the program, the Roger Ebert fellowship is still equipping students with the skills to be successful film critics.

The fellowship is hosted by the College of Media at the University of Illinois at Urbana-Champaign. It places three University students to work with Chicago Tribune film critic Michael Phillips.

“The thing that has been most valuable to everybody the two years that we have done it is just learning and relearning the lessons that Roger’s career exemplified,” Phillips said.

The second class of Ebert Fellows are Joe Longo, Mariah Schaefer and Jason Yue, and they have been working with Phillips since the fall.

The trio has had a variety of experiences writing about the arts. They attended the Chicago International Film Festival, covered theater, worked on their film criticism and more.

Phillips said the three have distinct personalities that make them fun to work with. He also said one thing that all three have in common is humility.

“They are incredibly versatile and willing to recognize the truth that the real writing is always in the re-writing,” Phillips said. “They have no ego about it.”

Phillips believes those characteristics have allowed the Fellows to learn and relearn what Roger Ebert’s career exemplified.

Longo, sophomore in Media and youngest of the three, wants to follow in the footsteps of someone he admires.

“One of the reasons I came to the University was because of the legacy of Roger Ebert,” Longo said. “As someone interested in film, that was really important to me.”

Longo’s college career looks similar to Ebert’s. He attends the University of Illinois, works at The Daily Illini and is in the same fraternity that Ebert was.

“For me, it felt like a good opportunity to see what my career could one day manifest in and take part of that,” Longo said.

The fellowship has expanded what film means to the fellows. Schafer feels that her opportunity to interview Afghan filmmaker Shahrbanoo Sadat left an impact.

The ability to interview opened up Schafer’s horizons and how impactful film can be around the world.

Beyond learning technical skills, the fellowship has meant a lot for Yue, senior in Engineering.

“I encourage more people to apply to it,” Yue said. “The community that you get plugged into, it’s a really unique one.”

The fellowship is already helping out the Fellows of the past. Shalayne Pulia was part of the inaugural class of Fellows from last year.

“I credit it very much with helping me get to where I am today,” Pulia said. “Just with everything that I learned in terms of reporting skills and getting to work with Michael Phillips.”

Pulia currently serves as an editorial assistant at InStyle in New York. She researches, writes and edits for InStyle and is working on a series titled “American Voices and Doing Good.”

While she doesn’t have a career in film criticism, Pulia said the skills she learned from the fellowship were invaluable.

“It really did a lot for me,” Pulia said. “I didn’t know how it was going to help me when I first started it. I’m a magazine writer. I want to be an editor. It was amazing to me how much those skills were transferrable for me.”

Pulia said she remembers an instance when the Fellows had the chance to interview Guillermo del Toro at Ebertfest last year.

Del Toro was ill and was about to get ushered out of the venue. The Ebert Fellows managed to get five minutes with del Toro.

“We each got to ask one question,” Pulia said. “When you have someone of that caliber that you are allowed to talk to, your question better be the best thing in the world. Having to prep for that — that is a skill I use every single day.”

For Phillips, the lasting legacy of Ebert for himself was his kindness. Even when Phillips was the new film critic at the Tribune, the already renowned and well-respected Ebert treated Phillips with respect.

“Roger was such a gracious, good colleague,” Phillips said. “Clearly the top of the heap and I was the new guy, he was so gracious and willing to extend himself with a compliment or a helping hand.”

Phillips has worked with the program since the beginning, and he appreciates that he gets to honor Ebert with his mentorship.

“I am really humbled by being the one chosen to advise this fellowship,” Phillips said. “It means a lot to me. It is exactly the kind of thing I would have loved as an undergraduate.”

The Fellows will use everything they’ve learned over the past year to talk to the many filmmakers who will be coming to Champaign for Ebertfest.