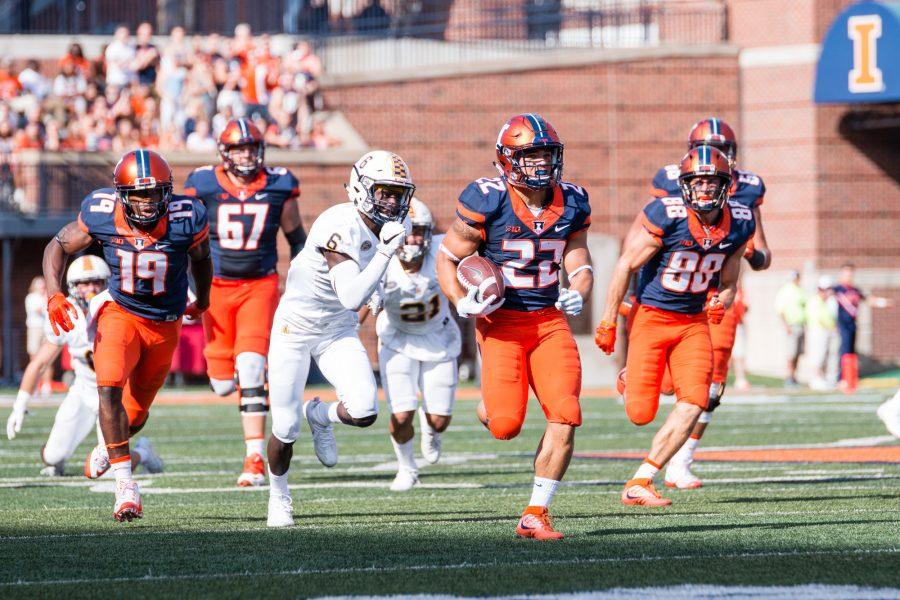 Illinois running back Kendrick Foster (22) runs down the field during the game against Murray State at Memorial Stadium on Saturday, September 3. The Illini won 52-3.

The redshirt-junior showed the 48,000-plus fans at Memorial Stadium on Saturday just how fast he can be with two separate 56-yard touchdown runs in the first half of Illinois’ season opener against Murray State.

Last season, Foster rushed for 78 yards and one touchdown total.

“When you’re a backup like Kendrick Foster and you get an opportunity to play, you have to make the most of it,” head coach Lovie Smith said. “He did that today.”

Foster finished with 118 yards on just four carries in the Illini’s 52-3 victory over the Racers.

With senior center Joe Spencer scratched from the starting lineup due to a knee injury, the offensive line struggled to create much room for starting running back Ke’Shawn Vaughn, who averaged 2.9 yards per carry.

That wasn’t an issue for Foster, though, who made the most of the small creases the O-line afforded him, before he turned on the jets for his two electrifying scores.

Foster had just 15 carries all of last season, so drifting into the end zone multiple times meant a little extra to the Peoria, Illinois, native.

“It meant a lot,” Foster said. “It was more of getting my confidence and getting the rhythm going. Once I did that, the sky’s the limit. I was just locked in — our whole offense was locked in, and once those two runs went off, our offense was just flowing.”

Foster’s 29.5 yards per rush on Saturday set an Illinois single-game record that dated back to 1955.

The stellar performance almost didn’t happen at all, though.

In November, Foster planned on transferring because he believed he’d receive more touches on a different team. He received offers from a few FCS schools, but his family convinced him to remain at Illinois for the education it would provide.

“I was immature about things,” Foster said. “I had to look at the big picture and was kind of being selfish about things. I grew up, looked at myself in the mirror and told myself I had to change and believe in myself. I wasn’t going to let anyone knock me off my horse and get me going to another school.”

Former head coach Bill Cubit allowed Foster to return to Illinois after he announced his intention to transfer, and with the arrival of Smith and his coaching staff, Foster is relieved he decided to stay.

“They took me in and acted like nothing happened,” Foster said. “I’m just so thankful for the staff for taking me in. I’m just here to help the team win.”

In just one shortened offseason with the new coaching staff, Foster is already reaping the benefits.

Under strength and conditioning coach Joey Boese’s guidance, Foster made major changes to his body in the offseason. He dropped 10 pounds from his 5-foot-9 frame and shed six percent of his body fat. The physical improvements showed in his effortless cuts and the way he glided downfield once he got into open space.

The culture shift that Smith and the rest of his coaching staff brought in March also lent a large hand in Foster’s breakout game — as well as the 287 total rushing yards that the Illini hung on Murray State.

Part of that change can be credited to running back coach Thad Ward’s emphasis on film study.

Three different Illinois running backs scored against Murray State, including redshirt-freshman Reggie Corbin who piled up 71 yards in his collegiate debut. True freshman Tre Nation even got in on the action with 47 yards on eight carries.

Vaughn is still expected to be the bell-cow back for Smith’s offense, but the other Illini tailbacks showed that they’re ready to contribute.

And if he keeps ripping off 50-yard runs, Foster could contribute more than he ever expected.

“He runs harder now, he’s faster he’s stronger,” Vaughn said of Foster. “Through the summer workouts, he was just grinding. He was working harder than anybody else and he’s really just trying to get out there and play.”