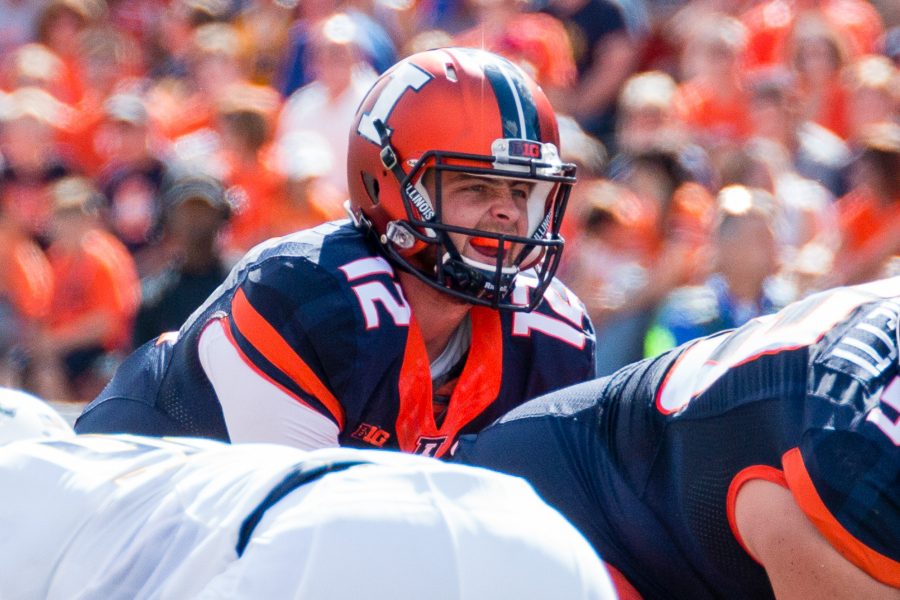 Illinois quarterback Wes Lunt (12) calls for the snap during the game against Murray State at Memorial Stadium on Saturday, September 3. The Illini won 52-3.

“Those freakin’ penalties, man,” Foster said. “They just shot us in the foot.”

It was a sloppy game for the Illini and Tar Heels alike in the primetime matchup under the lights of Memorial Stadium. The first sellout crowd since 2011 was loud from beginning to end, which forced multiple North Carolina false starts.

The crowd didn’t push the penalty advantage into the home team’s favor, though.

Illinois finished the game with 13 total penalties for 99 yards, which halted various Illini marches down the field and allowed for extra North Carolina chances on the other end.

“Miscues really hurt us,” head coach Lovie Smith said. “When you jump out to a lead and you have momentum, you have to take advantage of that. Offensively, we never could really get anything consistently done.”

After running back Ke’Shawn Vaughn’s 65-yard touchdown run on Illinois’ opening drive of the game, the Illini offense struggled to string successful drives together, and penalties became a deciding factor.

The offense was called for seven penalties, setting them back a total of 50 yards on the night.

“Those penalties killed us,” Foster said. “We’d gain 10 yards and get an illegal formation, and that’s bad, we can’t do that to ourselves. Our mindset going into this game was that we’re just as good or better than this team. We just can’t let our own emotions and penalties kill us.”

It was an emotional game from the outset, especially with the electricity that came from Illinois’ first non-conference sellout crowd since 1986.

Linebacker Hardy Nickerson said the heightened excitement shouldn’t have been an issue.

“I’m happy that we had this kind of environment early,” Nickerson said. “We just didn’t play to our capabilities. We had missed tackles, missed assignments and missed alignments, and all those things are just very uncharacteristic of us. Especially in big games, you’ve got to show up, and most importantly, you can’t let the stage get too big for you.”

The Illini’s first defensive penalty of the game was an offside call that pushed the Tar Heels up to the one-yard line, allowing quarterback Mitch Trubisky to sneak it in and tie the game early.

Smith has said limiting penalties and winning the turnover battle are two signs of a successful team, and the Illini did neither on Saturday.

Quarterback Wes Lunt threw for just 127 yards on 35 attempts and lost a fumble in the red zone.

“Sometimes you have to see what they can do to your team, and tonight, we saw what a penalty can do,” Smith said. “We just can’t do it. Winning teams don’t do it. We’ll learn from these things tonight.”