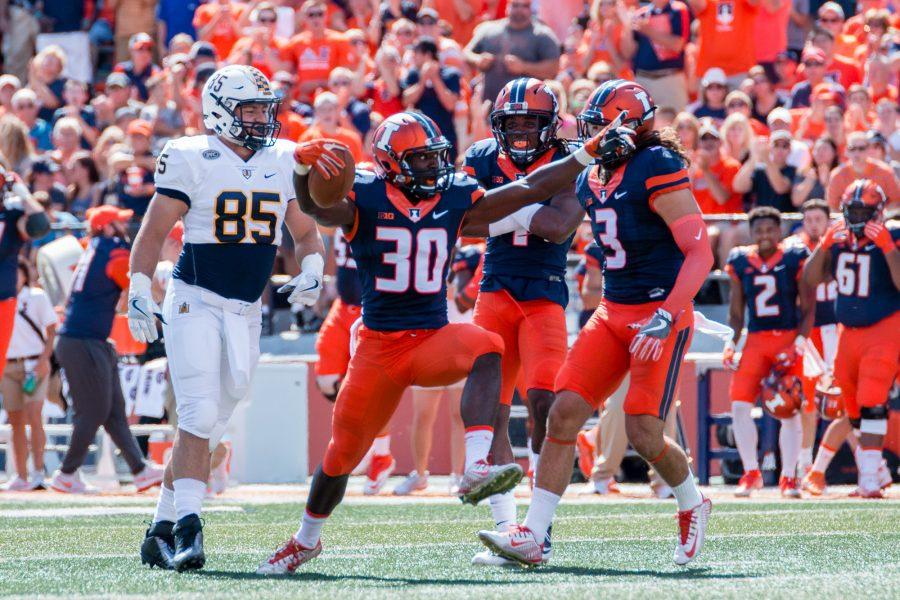 Illinois defensive back Julian Hylton (30) celebrates after an interception during the game against Murray State at Memorial Stadium on Saturday, September 3. The Illini won 52-3.

Illinois football is a home underdog to a Mid-American Conference team.

The story line for Illinois is coming back from a loss, but it’s also about avoiding a major defeat in a game that is put on the schedule solely for the purpose of adding a ‘W’ to the season.

Yet, Western Michigan is coming in at 2-0, a first for the team since 1994, and P.J. Fleck is leading a squad that’s already beat a Big Ten opponent at home in a 22-21 win over Northwestern.

The matchup against the Wildcats showed a team capable of competing against a Power Five team on its home turf.

Northwestern won 10 games last year and appeared in the Outback Bowl. After another loss in Week Two to Illinois State, the Wildcats clearly aren’t the same squad as last season.

However, don’t underestimate the Broncos — they’re not your typical MAC team.

Western Michigan wideout Corey Davis is sure to pose a problem on this front — he leads the FBS as an active receiver with 4,005 yards. He had seven grabs for 105 yards and three touchdowns last week.

Illinois’ Julian Hylton is going to have his work cut out for him this week if the Illini secondary hopes to stop Davis.

Jarvion Franklin and Jamauri Bogan combine for 363 yards and three touchdowns this season. Bogan is averaging 6.0 yards a carry, with Franklin going for 4.6 a carry.

The Broncos’ offense is held together by quarterback Zach Terrell who had 3,522 yards and 29 touchdowns last season, with 473 yards and five touchdowns already this year.

From both an offensive and defensive standpoint, the Illini have a lot of work to do to get the win.

Illini head coach Lovie Smith has preached that this week is all about coming back from a loss.

He said everyone should feel bad about the loss, complete with a “bad, terrible feeling deep down inside until the next game.”

Ideally, the North Carolina loss will drive Illinois to avoid adding another ‘L’ to the season. If a close game that escalated to a blowout score in front of a sellout crowd doesn’t get this team fired up, I’m not sure what will.

But Smith’s team is going to have to play some serious football to avoid that sinking stomach feeling again.

Charlotte is a senior in Media
[email protected]
@charlottecrrll