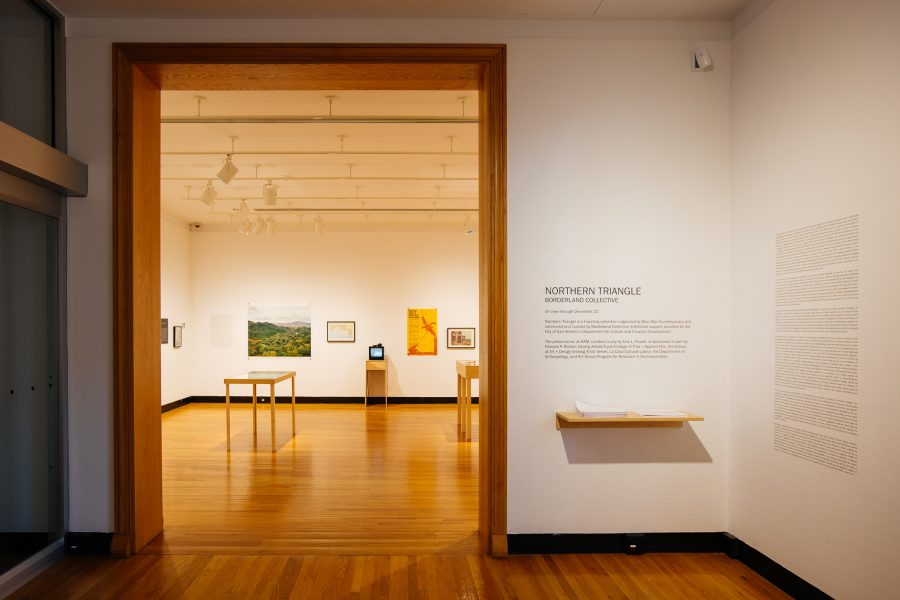 The Northern Triangle exhibition is a response to the current Central American refugee crisis along the US/Mexico border. It aims to open spaces for constructive and ongoing dialogues about human rights and migration. The exhibition is on view in the Krannert Art Museum, University of Illinois, through December 22, 2016.

On campus, the conversation around immigration has not been quiet. Last semester, chalk messages near the Latina and Latino Studies building seemingly held a pro-Trump stance on immigration. These messages included “Build the Wall” and “They have to go back #Trump.”

Now, the conversation continues on campus through Northern Triangle, an exhibition at Krannert Art Museum focused on immigration, displacement and geographic identity.

Borderland Collective, the long-term art project group behind Northern Triangle, stems out of Texas, where this exhibition premiered. Northern Triangle was on view in Chicago last spring and will be hosted on campus through Dec. 22.

Jason Reed, founder of Borderland Collective, said in an email that the goal of Northern Triangle is to develop space for exchange and conversation, but also to create cultural objects in the form of pictures, drawings, maps, poems, essays books and exhibitions as a way to contribute to a larger dialogue around these issues.

Thousands of unaccompanied minors migrating into Texas from the northern triangle region of Honduras, Guatemala and El Salvador inspired the exhibit.

Director of La Casa Cultural Latina, Gioconda Guerra Pérez, was excited to see this exhibition come to campus. Sponsoring the exhibition provided an opportunity to bring differing perspectives to the conversation.

Pérez noted that it is important to look at these issues through a humanitarian perspective. Through La Casa, Pérez is aware of students who come to the United States in K-12 schools here in Champaign-Urbana.

“Last year, we were very involved with the unaccompanied minor project. We had students in our K-12 schools, who were here by themselves,” she said. “We will be having conversations with people in the community.”

Amy Powell, curator of modern and contemporary art at Krannert Art Museum, is no stranger to the importance of this story that Northern Triangle has narrated.

“The artists recognize that images both support and contest power; bringing this fact together with themes of migration and borders is a real contribution at our historical and political moment,” Powell said in an email.

The moment Powell refers to is this presidential election year. Both she and Reed agree that this exhibition adds to the dialogue surrounding the race.

On Sept. 15, a gallery conversation is being held at Krannert Art Museum on the exhibition and the topics behind it. Powell and Professor Terri Weissman will be moderating this informal discussion between other faculty.

“What is oft-lacking in political coverage and its contemporary outlets on social media is informed, constructive dialogue and reflection around the histories, policies and modes of representation of these issues,” Reed said.

Nearly nine percent of University students reported their ethnicity as Hispanic, according to Division of Management Information. For the 2016 school year, enrollment is 11.2 percent amongst Latinos and Latinas.

The question is whether or not this exhibition can resolve the negative dialogue. Pérez believes that Borderland Collective’s work is a part of the solution. Without this dialogue, Powell believes these actions will continue to happen.

“If the US public, including our campus public, had a greater awareness of and curiosity for issues of politics, power and economies around migration and immigration in this country, ideally different conversations could happen without such xenophobic actions,” Powell said.

For Reed and Borderland Collective, the exhibition is also more than just creating dialogue on these important topics.

“We are really interested in how the exhibition might invite viewers to examine their own individual position in relation to the historical and contemporary moments we have put forward,” Reed said.

“In reaction, Blue Star Contemporary Museum in San Antonio invited Borderland Collective to make work around the issue as a way to extend the conversation to the community,” Reed said. “I reached out to a few colleagues, artist Mark Menjivar and art historian Erina Duganne, and we decided to transform the gallery into an archive, classroom and space for dialogue centered around an exploration of the United States’ long history of involvement in the Northern Triangle.”

“Each picture and document has a story that is interesting in its own right, but more interestingly is how the pictures and documents hold dialogue with each other across the space of the gallery, all together telling a more fruitful story,” Reed said.

Members of Borderland Collective involved with Northern Triangle will be on campus in October, hosting a variety of events including a Timeline Workshop, class meetings, public panel talks and collecting migration stories of graduate students from the University.