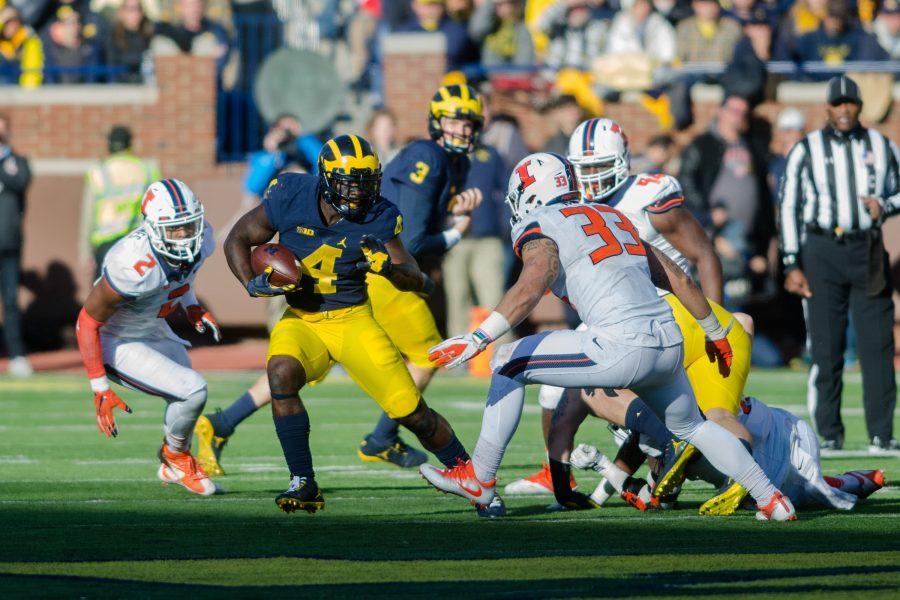 Photo courtesy of the University of Michigan

Senior running back De’Veon Smith makes a cut against the Illini defense.

This game went about as well as Illini fans expected.

The only surprise was the starter at quarterback: Jeff George Jr., who made his first-career start in front of a Michigan Homecoming crowd of 110,000.

Lunt and Crouch were not dressed, and honestly, who knows how much of a difference having either of them would have made.

It was just an ugly game to watch with not a whole lot of positives for Illinois, minus beating the spread.

The Illinois offense only managed 172 yards, compared to Michigan’s 561. George went four-for-15 with 95 yards and one interception — 43 of those yards came from one long pass to wide receiver Malik Turner.

George didn’t throw a complete pass until the third quarter. And by that point, Harbaugh had been giving plenty of players field time.

Michigan was just too good of a team for Illinois to really do anything of note, and when the Illini had to rely on their third-string quarterback, it doesn’t leave a lot of room for creativity.

To George’s credit, that’s a lot of pressure for someone who had never played under such scrutiny.

Head coach Lovie Smith said it best: “It’s tough, but everybody has to have a start.” Unfortunately, that start just happens to be in front of the largest crowd the Illini will face all season.

And honestly it was more fun to talk about the two different coaches, then the on the field performances.

Harbaugh is a crazy antic-fueled man, pulling one recruiting stunt after another that constantly grabs ESPN headlines and social media shares.

He’s the go-to man in khakis and is right proud of it.

There’s a subhead on SB Nation titled “Jim Harbaugh is weird.” My personal fave is him singing the national anthem at a Little Dicky concert. And yes, he’s wearing his khakis, of course.

Illinois’ Smith is almost the complete opposite.

As far as I know, Smith hasn’t made a surprise appearance at Canopy Club for a concert this year. Maybe he’s just waiting for the right act.

This game didn’t show the true potential for this coaching matchup. Give it a few years when Smith has his own players, and then it will be more exciting to see.

This year it was just a classic blowout with Illinois leaving the Big House with another loss, on a day when the Cubs made up for it tenfold.