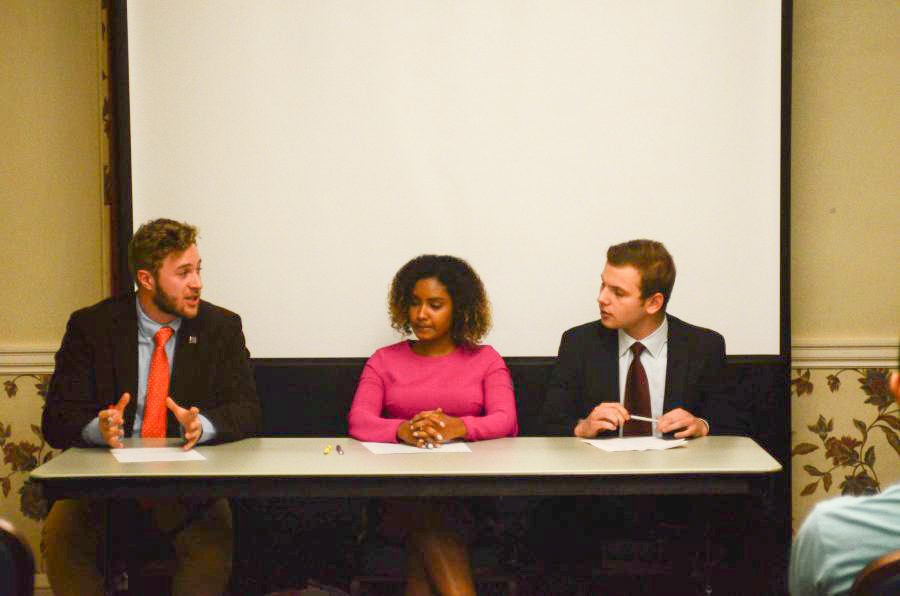 The candidates for student government, Bobby Knier, Raneem Shamseldin and Jesse Tabak, face off in a debate at the Illini Union room 209 on Monday, March 6th.

What do you believe is the relationship between the Illinois Student Government and the students? How can it be improved? And for the two of you who are currently in student government, why hasn’t it been improved yet?

Bobby Knier admitted that the Illinois Student Government does not have a good enough name around campus.

“We need to start going out to people in the community much more than we ask them to come in,” Knier said.

Knier said he had a town hall meeting, and “it was a failure.” Student government needs to be “using all of our resources and engaging the senators.”

Jesse Tabak said he is interested in the Greek community because that is an area he is part of, and “those are the people I’ve associated with.” He also said there is a large portion of Greek students on campus, and this is not reflected in the senate at the same levels.

“When somebody comes to me with an idea that I don’t share, I’m still able to listen to that opinion, and because of that, I’m able to generally to find a consensus,” Tabak said. “(We need to) talk to constituents one-to-one.”

Raneem Shamseldin said she would encourage senators to clock more hours into reaching out to constituents.

“It’s really important to find other ways to reach out to organizations,” she said.

Shamseldin also wants to make sure that all people are welcome and that people who don’t fit into specific groups are still be represented.

“We should send delegations of senators to empathize and work with them,” she said.

The Illinois budget crisis has been affecting places of higher education; how would you specifically use your resources as president to make the state government listen to students and ensure funding for the University?

“We can all agree that it’s too long to go without a budget,” said Knier, calling it “pretty ridiculous” that the government has gone so long without a state budget.

He said another important aspect was to reach out to other people in the UI system and that they, as students, are in a unique place to make a difference.

“We’ve been doing a lot of work as far as lobbying goes, but (maybe it’s time to try a different approach),” Knier said “Maybe do a march and shake it up a little bit.”

Shamseldin said she has lobbied in Springfield multiple times and would like to see funding return to pre-impasse levels. She would also like to see the Monetary Award Program fully funded.

But she did say there is a “high level of uncertainty” at the University, and that is why people are leaving to attend other schools.

Tabak said the state budget impasse affects different students in different ways. He brought up the decreased funding to the Rape, Advocacy, Counseling and Resource Center.

He also focused on ensuring that good professors stay at the University and said that a large problem in regard to the budget impasse is that professors might leave the University, which would impact the student’s education.

In what ways specifically will you open up conversations between diverse groups such as racially diverse ones, women, political groups, etc. on campus while maintaining respect and peace between students?

Tabak said he grew up very conservative but now he is more liberal. He would use this experience to get the Illini Democrats and Illini Republicans to sit down and talk their differences out.

“When people yell and scream, nothing gets done,” he said.

Knier also focused on the Illini Republicans and the Illini Democrats. He said, “(We) need people on campus who are strong leaders … (People who) can inspire people and keep having those conversations … When we bring groups together, having a safe space.”

Knier said he has also reached out to cultural groups on the campaign trail by going out and meeting with different groups.

She said sometimes on campus, people pretend to be diverse but are actually just using minorities to seem inclusive and diverse while not actually meeting those goals.

“I don’t think we should end dialogue, but I think it needs to be constructive,” she said.

Shamseldin also said she has reached out to cultural houses and talked to students. She hopes to make the government more representative of diversity and is also interested in creating a North African Cultural House.

How do you plan on furthering the efforts of It’s On Us, and what other ideas do you have to decrease sexual assault on campus?

For Knier, the most important thing is supporting survivors of sexual assualt and taking care of their needs first. He has participated in the It’s On Us campaign with the senate.

“I think it’s really important we engage campus police. We need to be holding more events with them so we can come to a mutual understanding and move forward,” Knier said.

Tabak said all of us will do good work for sexual assault, and it shouldn’t be divisive groups between the candidates. He has already been in contact with the Rape, Advocacy, Counseling and Resource Center to facilitate further action to provide resources for sexual assault.

He also said, “We want to get the Greek community involved in this, and it seems like they are sitting back, but we are not.”

What kind of experience in government and otherwise do you have that has prepared you to be president, and what is your main goal?

Knier said his main goal on campus is “making sure students find their place on campus, that that campus is safe and that all voices are heard equally”

Shamseldin said the main goal of her campaign “is to increase student representatives in campus” and “do a better job speaking with constituents.” She also said she wants to talk to different organizations, making sure student’s voices are heard

“We need to work under the advisement of their peers because that’s who we are representing,” Shamseldin said.

Tabak said his main goal is to “create an environment on this campus where people can speak their mind.”

Tabak led much of the debate so far, asking the other candidates questions while not mentioning many specifics himself.

Tabak said he has gone to Greek houses when the other candidates have not. He said he wants to look to groups that haven’t been politically active.

The candidates for student government will face off in a debate tonight at the Illini Union room 209.

The event is hosted by The Daily Illini, and the moderator is Illinois Student Government Reporter Gillian Dunlop. She has covered the student government since October, and her stories can be found here.

Each candidate will answer five questions regarding sexual assault, diversity and inclusion, fitness to be president and Illinois Student Government relations. They will have two minutes to answer each questions and then a period of 10 minutes to respond to the other responses.

Stay with The Daily Illini  for updates to this story.