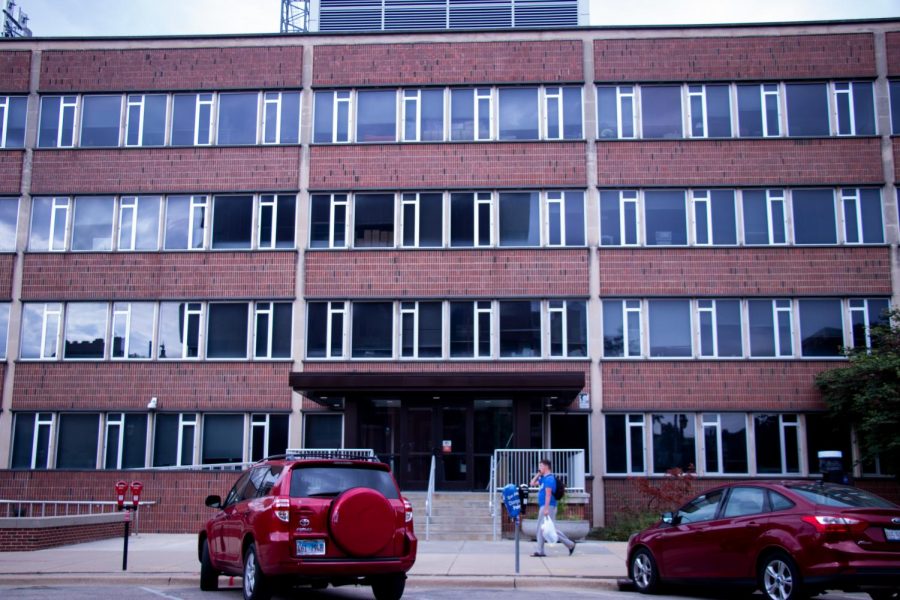 A student passes by the Counseling Center, 610 E. John St., on Oct. 2. The University’s Counseling Center is home to various student services, such as support for mental health, which becomes increasingly important as some student struggles boil over.

Macksimillian Topinka, freshman in LAS, said he has struggled with mental health issues, specifically depression, anxiety and panic attacks, for about six or seven years.

“I’ve never really seen anybody regular for that,” Topinka said. “I’ve seen people on and off, but it’s never really helped, and school environments tend to make that a little bit worse, so coming to college at first was definitely a struggle.”

Students are typically told to visit the Counseling Center to seek help, but Topinka said the same-day appointment policy can sometimes cause anxiety.

“So you have to call the day that you’re going in, and I can’t do that,” Topinka said. “I had it dialed up, and I was so ready to call, and then I heard the dial tone click in, and I hung up immediately because it was too much anxiety.”

“We do same-day services,” Weathersby said. “A lot of times students don’t understand why we do that. Why do I have to get up and call and make (it the) same day?”. “We know that when we catch students in their moment of need that same day, they’re going to show up.”

She said the Counseling Center wants to meet students when their needs are greatest. If an appointment is scheduled for three weeks later, there is a high chance the student may not come.

Topinka said a number of factors make college a difficult experience for people with mental illnesses.

“Here, I can’t turn (homework) in late at all,” Topinka said. “It can’t be a second late. That’s really bad for me — more specifically because a lot of times, one of my symptoms of depression is executive dysfunction, so I physically cannot force myself to accomplish these tasks, and a lot of professors and other students are not very forgiving of that.”

Topinka said this may come from a lack of understanding about the situations of those with mental illnesses.

“A lot of people have this mindset where it’s like, ‘OK, it’s mental health, you just push yourself to do it. You can overcome this,’ when that is not always an option,” Topinka said.

“They can stop you from doing these things, and you cannot overcome them just with the willpower of your mind like people seem to think you can,” Topinka said.

Topinka said some of the people who are allowed to be on campus have been serious triggers.

“I know this is a public campus, so anybody can walk on, but I don’t think the school deals with people who will stand out here and spout hate speech very well because there’s this Christian, Brother Jed,” Topinka said. “He’ll stand out there.”

Topinka and his friends have a group chat where they will warn each other whenever Brother Jed is on campus because all of them are triggered by his actions.

Weathersby said that anxiety is outpacing depression as one of the leading mental health issues among college students.

“We’re not super far behind (the) accreditation that they recommend,” Weathersby said. “The student population is outpacing our resources that we have at the Counseling Center.”

The center does not provide long-term care for students.

“We can’t see everybody individually for the duration of the time, so we make assessments clinically and decide what would be the best option for (the student),” Weathersby said.

Topinka said if a student has an actual therapy appointment, they can be excused from class. However, if the student misses class because their mental health issues have arisen, the University might not excuse it.

“I have a friend who was recently hospitalized for mental health reasons, and she had to drop a class, and she is still jumping through hoops to get that drop to where she doesn’t have to pay for it because she was in the hospital,” Topinka said.

Topinka said this friend is two weeks behind on assignments, but her professors are allowing her to make up those assignments.

She still feels overwhelmed because she has many make-up and new assignments to complete.

“For a person who is already mentally ill, it’s way too much,” Topinka said. “You should not have to go through all of these steps when you’re not in a great place to be going through these steps in the first place.”

Weathersby said a formal diagnosis is often needed to have work and classes excused.

Weathersby said getting the help needed from wherever on campus is a good strategy that will help students perform optimally and help them understand that they don’t have to be perfect to be productive.