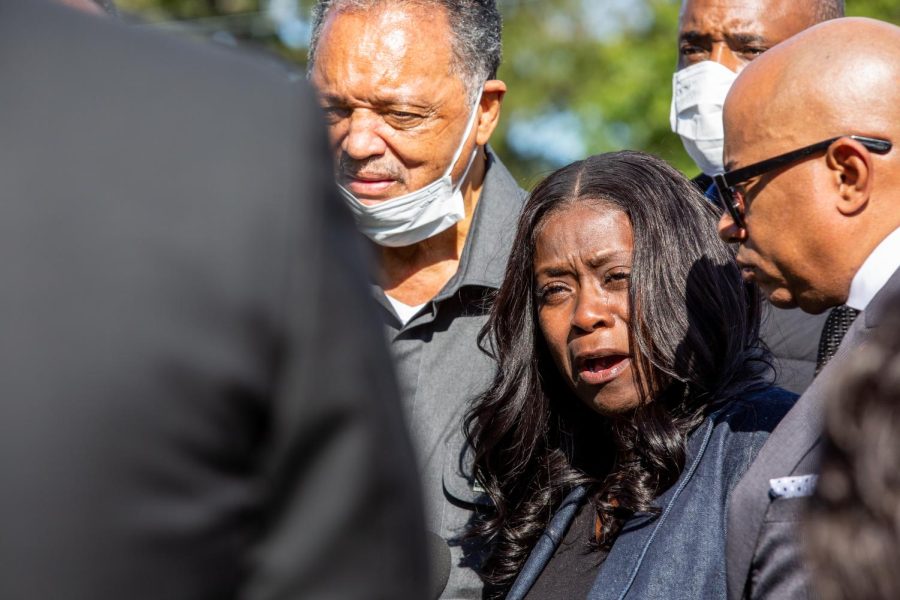 Carmen Day speaks with reporters while mourning her son Jelani Day at his funeral service on Tuesday morning. During the funeral and press conference, Day’s relatives and Rev. Jesse Jackson call on the Federal Bureau of Investigation and President Joseph Biden for justice.

The funeral for Jelani Day, a 25-year-old student at Illinois State University, occurred on Tuesday at the Spring Hill Cemetery in Danville.

Rev. Jesse Jackson and about 30 people watched him get lowered into the ground and cried out for justice.

Carmen Day, Jelani’s mom, said burying Jelani was the hardest thing she’s had to do.

“I just saw one of the best things that God blessed me with go in the ground, and I will never get to talk to him or see him again,” Day said.

Jelani disappeared on Aug. 24, and his car was found a couple days later. A body was found nearby, face down in the Illinois River in Peru. In late September, the body was confirmed to be Jelani’s.

However, the exact cause and manner of death remain unknown.

Day and her family said they have been frustrated with the lack of response to Jelani’s case.

Jackson said the circumstances surrounding Jelani’s death are all too familiar.

“It’s an Emmett Till type of crime,” Jackson said.

After the burial, Jackson went to the Grove Street Church of God in Christ in Champaign to host a press conference.

There, he said the local officials investigating Jelani’s death aren’t forthcoming, and he called for the Federal Bureau of Investigation and President Joseph Biden to get involved.

Jackson and the Rainbow PUSH Coalition, an international and civil rights organization Jackson created in 1996, called to students at the University specifically and encouraged them to protest. Jackson and members of the coalition have met with students  from the University, including those affiliated with several Black Greek Council members, to rally student support.