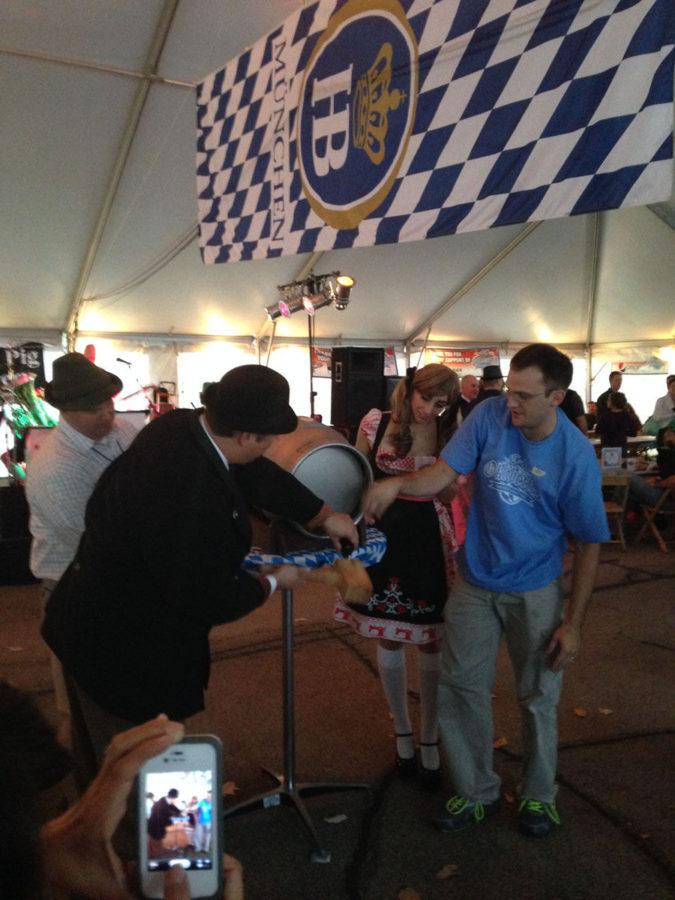 Attendees and performers enjoy the inaugural Champaign-Urbana Oktoberfest at the Big Grove Tavern on Oct. 12, 2013.

With polka music and lively people dancing by in traditional costumes of dirndl and lederhosen, the Champaign-Urbana Oktoberfest is a celebration of German beer and culture, much like its predecessors in Munich and across Germany.

German festivals are often attended by millions of people from all around the world to experience festivities as they drink beer and sing together.

However, unlike other German festivals across the nation, CU Oktoberfest brings the community together for a different reason — to benefit Champaign’s Developmental Services Center, or DSC.

The second annual Champaign-Urbana Oktoberfest will take place on Saturday, from 3 p.m. to midnight in the parking lot at Washington & Neil streets. Tickets for entry are $5, and food can be bought using tickets. Throughout the night, there will be three different polka bands: Die Musikmakers, The Polkaholics and Bolzen Beer Band.

The event also features beer from Destihl in Champaign, as well as a beer brewed especially for CU Oktoberfest by local brewing companies Triptych in Savoy, The Blind Pig and JT Walker’s Brewery in Champaign. According to Andrew Gravlin, manager of The Blind Pig Co. and The Blind Pig Brewery, the recipe is the same as last year, but with a few improvements.

“It’s very malty,” Gavlin said. “It’s fairly dark color for an Oktoberfest. You’ll see some German ones now that are much lighter — this is definitely a malt-forward. It’s probably going to taste a little different because we were able to brew it a little sooner this year and let it lager longer, so that should help clear it up; it shouldn’t be quite as hazy as last year.”

After running into problems with food as well as beer distribution at last year’s festival due to the unexpected influx of people that attended, CU Oktoberfest is learning from their experiences in addition to focusing on becoming more family-friendly, said Janice McAteer, director of development at DSC. This year, the event features face painting, balloon making and polka dance lessons from 3 p.m. to 5 p.m., as well as live music throughout the night.

“Last year, we had a lot of people come, too, and ask us why it wasn’t an all-day event,” McAteer said. “Part of that is because it was new. So, I think we’re trying to address all of those issues, too, as we move forward and keep this evolution going and learn from this year: What did people enjoy, what did people not enjoy, what were the stumbling blocks and what could we do better next year?”

CU Oktoberfest is also borrowing old traditions from the Munich, Germany, festival to create an authentic atmosphere, attracting people from as far as 50 miles away to attend this year’s event. Some attendees even go as far as to dress up in traditional clothing, according to Wiesn-Chef Achim vonBodman.

“More and more people are getting lederhosen or the dirndl. I’ve helped a few people go and purchase dirndl straight from Germany,” vonBodman said. “There is a lot of costume to this event that people are excited about, that people are going out and buying clothing for a specific event, so that’s pretty cool.”

In Germany, the mayor of Munich taps the first keg at Oktoberfest to signal the start of the festival, and the mayor of Champaign will be doing the same thing at CU Oktoberfest.

“As much as we can do to make this pretty authentic feeling, we’re going to continue to do that,” vonBodman said.

Susan can be reached at [email protected]