Sharing the story of Snapchat’s illiniway 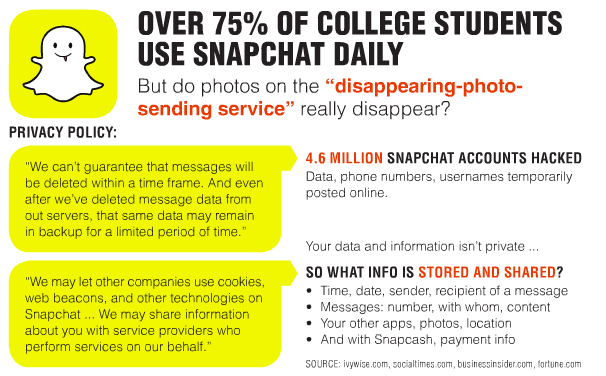 Snapchat might as well be the wild west of social media.

Snapchat entices a level of secrecy with its time-limited photo and video sharing between known contacts. But from the app’s depths, an account named “illiniway” has attracted over 10,000 followers by sharing daily visual collections for all to view.

illiniway, previously titled “cham_bana” and “cham_bana2,” has quickly garnered the attention of students, alumni and more across campus and beyond. Using the “Snapchat Stories” feature, the account owner uploads hundreds of submitted photos and videos that followers can then click through at will within 24 hours of being posted. Its content ranges from late night-out captures to sleepy selfies in lecture, but its host of raunchy depictions of student life often dominates its daily uploads.

“It’s just interesting; if I were a passive viewer, it would be an interesting snapshot of someone’s life,” said Jacob, the creator and operator of illiniway who has chosen to remain anonymous. “The way that I see it is that I know that it’s just a highlight of people’s lives.”

The inappropriate content ranges across user submissions but often includes nudity, sexual activity and illegal drug use. It’s what caused the original account, cham_bana, to be shut down in December, just weeks after its start.

Jacob, who didn’t start the original cham_bana but took it up with cham_bana2, receives most submissions via Snapchat and downloads the content through a jailbroken smartphone — a phone formatted to remove unauthorized restrictions. He then filters out the explicitly offensive material considered to be racist, misogynistic, homophobic or worse. But the rest makes it to the daily “Story.”

However, this type of thread — receiving large amounts of snaps and publishing such a lengthy collective runtime for its “Story” — can flag it as a spam account to app officials.

But Jill Hazelbaker, spokesperson for Snapchat, said in an email that accounts like these also violate their Terms of Use.

“They may post content that breaks our Community Guidelines (e.g. invasion of privacy or harassment),” Hazelbaker wrote in an email. “Our Terms of Use also prohibit the use of third-party applications to access Snapchat, like those used to upload pictures. When a Snapchatter violates the Community Guidelines, it’s not uncommon for others in the community to report it to us.”

On Jan. 27, Snapchat released a new feature called “Snapchat Discover,” which allows media outlets such as ESPN, CNN, Yahoo, Vice, Comedy Central and others to publish videos and news-worthy article highlights as part of their branding.

In a sense, illiniway is serving as an informal representation of the University on Snapchat, reflecting the highlights of the daily snapshots of what goes on in campus life.

On Tuesday, Robin Kaler, University spokeswoman, said she was unaware of the account’s activity and had never heard of illiniway before.

Recently, Jacob set up a Twitter page and email account to receive additional submissions and to keep adamant followers updated on replacement accounts if the current one is shut down.

Jacob first heard about similar Snapchat threads, such as CPS (“College Peep Show”) and another account associated with the University of Iowa, last fall. He then contacted the original creator of cham_bana via Snapchat after learning of the one on the Illinois campus. And when the original account was shut down because of its content, Jacob was ready to take over.

“The way that (the cham_bana creator) would send out messages seemed like he didn’t really want to do it,” Jacob said. “I did message him once asking why he didn’t want to do it, and he answered, ‘Honestly, I don’t even want to do it anymore; it’s just so time consuming.’”

Once the first account was shut down, Jacob then revamped the thread with the successive username. But then in January, the cham_bana2 thread was shut down following the Snapchat app update, which wiped all flagged accounts, he said.

Past the sex- and drug-related snaps, Jacob also feels it’s used to spread positive news throughout campus, as the account has a higher reach to spread news faster than some other outlets.

While some followers may come for the nudity and bong hits, others follow for the real-time updates of campus happenings, such as a recent marriage proposal in Foellinger. Jacob said that event gained him about 200 followers on that day alone.

“When it comes to things like the marriage proposal, that garnered a huge amount of interest. … I got several videos and pictures, and people were texting their friends, but the way people really found out about it was through my story,” he said. After receiving the submissions of the marriage proposal, Jacob said the process was like all others that make it to the feed. He views the submissions and chooses what content he feels is deserving of a spot.

But Jacob also uses other means. If a user has followed the illiniway account, their personal story can be viewed by illiniway, and pictures and videos can be downloaded through the jailbroken smartphone. Submissions can also consist of photos and videos taken of individuals unaware of the photo’s being taken, allowing over 10,000 people to view unauthorized content.

Though running illiniway is tedious and time consuming, Jacob finds joy out of the entirety of running the account.

“I like doing it because sometimes I get in contact with (the users), and there are a lot of things that I don’t post that are sent to me, and it’s still like another snapshot of someone’s life,” Jacob said.

With a “cham_bana4” already set up in case of a shutdown, Jacob doesn’t see an end in sight.

“The concept of it is really interesting, and the possibility of monetizing it is definitely appealing to me,” Jacob said. “It can be very lucrative with that kind of audience, specifically college kids.”

Frances can be reached at [email protected].