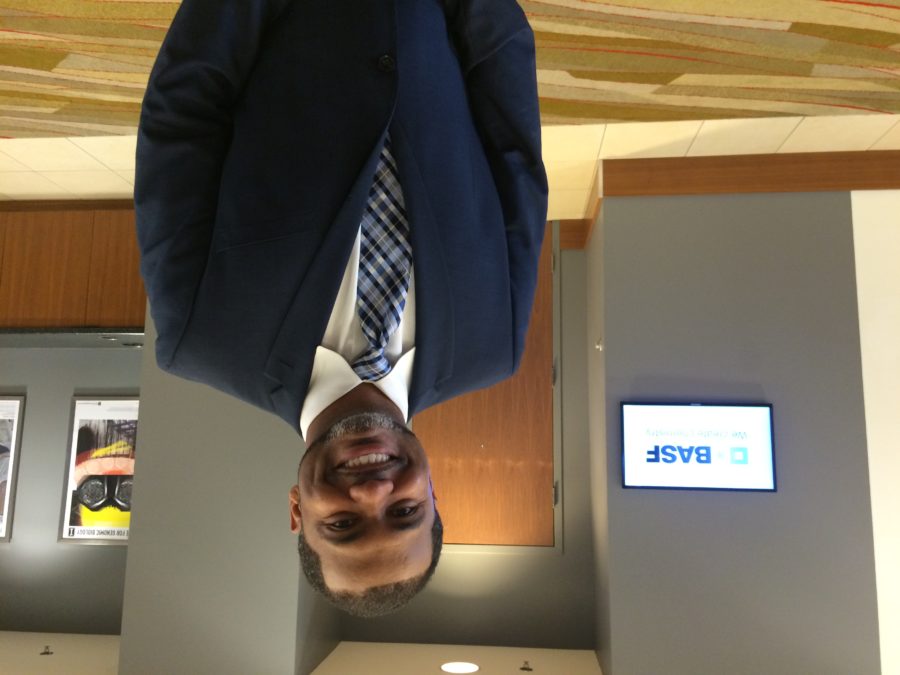 Freedom Writer Manny Scott, 38, was the keynote speaker at the Beginning Teacher Conference for the sixth year in a row on July 1 at the I Hotel and Conference Center.

When Manny Scott was in high school, his life was forever altered by a first-year English teacher who believed in him: Erin Gruwell.

Scott, 38, was one of the 150 students at Woodrow Wilson High School in Long Beach, California, inspired by Gruwell’s teaching and comradery.

From 1994 to 1998, Gruwell taught students who were considered “unteachable” and “at-risk.” Her method of helping them was by asking them to write down their experiences in journals. Those journal entries were collected into a book, The Freedom Writers Diary, which was published in 1999 and inspired the 2007 film Freedom Writers.

A Freedom Writer inspired by Gruwell in the 1990s, Scott has inspired hundreds of beginning teachers for six years in a row as the keynote speaker at the University’s Beginning Teacher Conference.

This year, the conference took place June 30 and July 1 at the I Hotel and Conference Center in Champaign.

“For this audience, he is an example of the impact that a teacher can have on a kid’s life,” said Chris Roegge, executive director of the Council on Teacher Education and director of the Illinois New Teacher Collaborative.

Roegge said during the first conference in 2010, a long line of teachers wanting to get autographed copies of Scott’s books formed after his keynote speech. He said it disrupted the schedule of the afternoon sessions because a lot of the teachers wanted to talk to Scott.

Laughing, Roegge added that Scott has been the keynote speaker every year because he was “such a huge hit the first year.”

This year, however, Scott’s keynote speech was the last session on the schedule. Roegge said he does not know if Scott will continue as the keynote speaker every year because they tend not to schedule too far ahead.

“So far, he has always been the most popular part of the conference,” Roegge said.

About 138 teachers from across the state who just completed their first year of teaching attended the conference.

Scott encompasses the inspiration bestowed on the teachers at the Beginning Teacher Conference.

Scott spoke to the audience of first-year teachers about his experiences with Gruwell and other mentors who saw his potential and encouraged him.

“I’m honored and humbled to be in your presence because it was people just like you … who helped me become who I am,” Scott said. “People with their own shortcomings, insecurities, flaws and brokenness left their comfort zone to meet me at my point of need and pick me up … and help me turn things around.”

He said he does not go to most places twice, but whenever he gets a chance to talk to new teachers, he always tries to say yes to the invitation to speak to them.

Scott had a difficult childhood and adolescence. He said his father has been in prison almost all his life and his stepfather was a hardworking man who was addicted to crack and used to beat Scott’s mother and sometimes Scott himself.

He also said he lived in 26 apartment buildings before he was 16 years old. Scott said that in between living in those different apartments, he suffered “a whole lot of homelessness and brokenness.”

“I fell so far behind in school that my English grammar skills were so poor; my English language skills were so bad that I was classified as an English as a Second Language student, and we did not speak Spanish at home,” Scott said.

He said he hated school, and during his first semester of his freshman year of high school, he earned a 0.6 GPA. Not long after, he dropped out of high school because his best friend Alex was brutally murdered.

“He was about 14, but he was a junior on his way to UCLA; (he) wanted to be a counselor. He saw my clothes and shoes, and he let me borrow his—good guy,” Scott said. “When he died, a part of me died with him, and I dropped out, and I gave up.”

He said one day, he was sitting on a park bench in Long Beach, California, when a man addicted to crack sat next to him and begged that he go back to school. The man said he did not want Scott to turn out like him.

Scott went back and received mostly As and Bs throughout high school. He said one of his mentors was Gruwell because she “became a student of her students.”

“She said, ‘I want to help you find your voice because you have one, and if I do nothing else … I want you to take these journals, and I want you to write … and we’ll deal with grammar and syntax later, but just get it out,’” Scott said.

He said Gruwell encouraged him to attend college because she believed he had a gift with words. She helped him apply to the University of California, Berkeley. He attended UC Berkeley and graduated with two bachelor’s degrees: “one for me and one for my boy Alex, who wanted to be a counselor.”

Scott said Gruwell encouraged him to continue his education. He went on to earn a master’s degree and is currently working on a doctorate degree.

“My friend, sometimes you have to believe in someone else’s belief in you until your own belief sets in,” he said.

Now, he is a motivational speaker, author, husband, father of three and founder of Ink International Inc., an educational consulting team.

After his speech, Scott received a standing ovation and proceeded into the hallway to sign books.

Leah Ramseyer, English teacher at Midland High School in Varna, Illinois, was one of the first teachers in line to get a book autographed by Scott.

She reflected on how a high school English teacher was able to have such an impact on him.

“It’s a challenging job, it’s a humbling job, but I feel like writing is a very powerful outlet,” Ramseyer said. “Even if students don’t like to write, … I feel like in one way or another, I can reach out to the students and have them respond in a way that tells me about their own lives.”

On July 1, Freedom Writer Manny Scott delivered the keynote speech at the University’s Beginning Teacher Conference for the sixth year in a row.