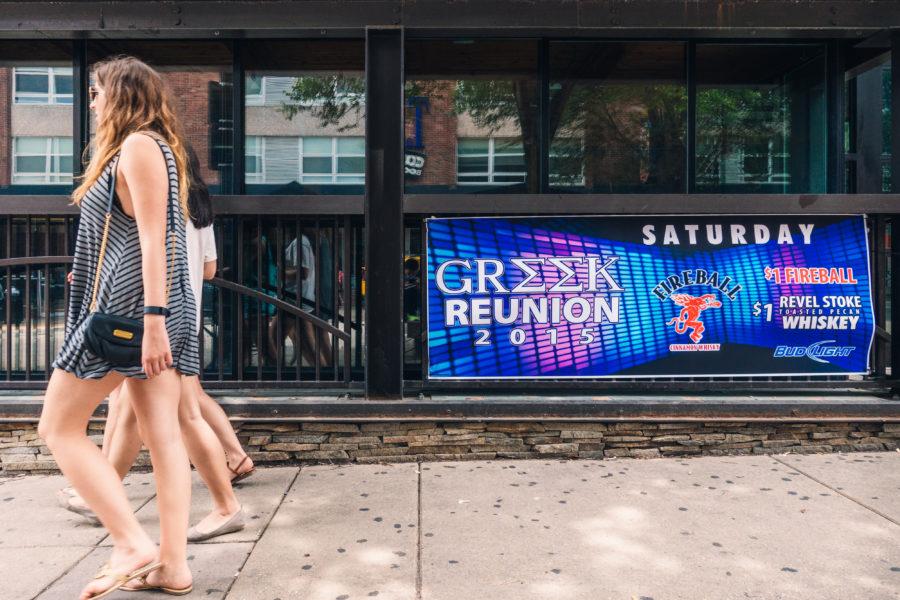 Students hang out in front of the Clybourne bar on Saturday, July 11.

From the long lines at Red Lion to the $10 bar covers, Campustown’s night scene looked like school was back in session.

Don’t worry – there is still over a month left of summer vacation. Rather, this weekend was the annual “Greek Reunion,” the weekend-long event held to reunite one of the nation’s largest Greek systems after weeks of summer separation.

The annual event was highly-anticipated by both new and old “Greeks.”

Clare Stukel, junior in Media, was a first-time attendee. She said she was excited about the festivities ahead.

“I think it will be really fun to see all of my girlfriends that have been away this summer when they come back down,” she said.

The majority of this year’s festivities took place at Red Lion, although other bars, such as Cly’s, also hosted some events. Even with all the drink specials offered, Greek Reunion provides increased revenue for campus bars.

Red Lion owner Scott Cochrane, who also owns Firehaus and Cly’s on campus, said the large number of students that come to Champaign this weekend helps offset the low “bar attendance” rates the rest of the summer.

Cochrane opened the bars earlier than usual and offered more activities to draw larger crowds. These activities included free food, a bags tournament, and a handful of DJs, including Sketch and Settlement. This year’s Greek Reunion coincided with the Sox-Cubs games, too.

Not only were more students on campus this weekend, but more police officers were present as well. The Champaign Police, Urbana Police, and University Police departments all stepped up their efforts and had increased traffic enforcement of alcohol-impaired drivers.

Because most students participating in Greek Reunion drove to campus, a greater focus was placed on patrolling the streets rather than the sidewalks.

Champaign’s Sgt. Geoff Coon said the issue of drunk driving is one of the biggest–and most dangerous–issues his department tackles.

He reminded students that driving under the influence not only puts lives at risk, but it “can mean time in jail, loss of license, and steep financial expenses; the average DUI costs about $10,000.”

Fortunately, initial reports from the police departments indicated no DUI arrests this weekend.

Although Stukel, a member of the Alpha Phi sorority, is in town all summer long, other Greeks aren’t, such as Amelia Mugavero, junior in Media and Texas native.

The Gamma Phi Beta sorority member said, “It was a lot of fun to see my sisters after a couple months away in Texas. It was a blast to get dressed up with my friends and have fun at good ‘ole Red Lion.”