of Montreal brings the funk, leaves it all on stage 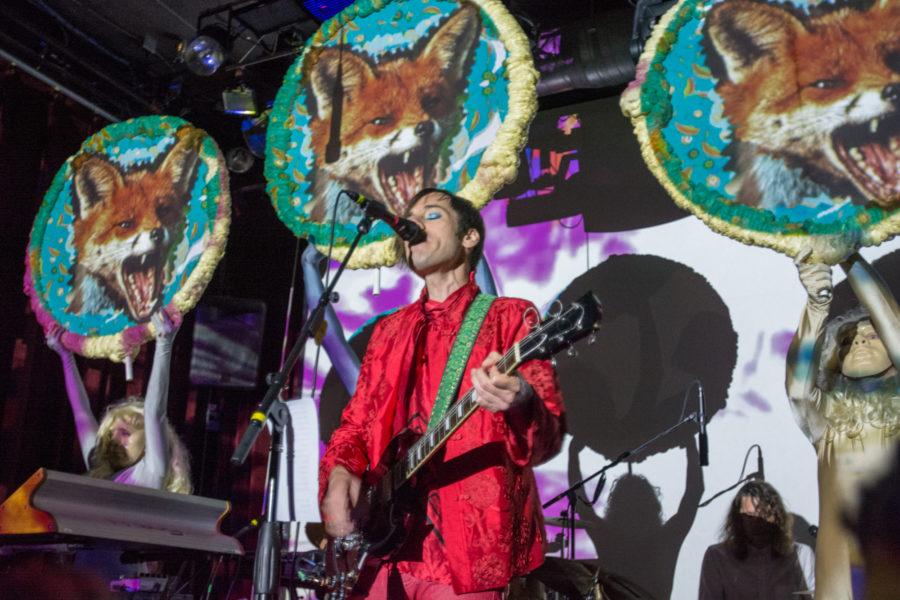 Kevin Barnes, frontman of the band of Montreal, performing at The Highdive in Champaign on Wednesday, September 9.

Of Montreal performed at The Highdive on Wednesday with Surface to Air Missive as part of the Pygmalion Show Series, and it was a steady progression of intensity that was as much performance art as it was musical talent.

Surface to Air Missive’s guitar-filled tracks flitted between tempos and styles, while the four-piece’s light, upbeat vocals got the crowd bobbing their heads.

The instrumental, simplistic set, lit only with a calm orange light, fit well with of Montreal’s technique-focused album, “Aureate Gloom,” but it was the calm before the storm.

A luchador in a skeleton-printed suit introduced of Montreal, advising the audience to abandon the ways of civilization and live as possums instead. Only after imparting his words of wisdom did he invite frontman Kevin Barnes to the stage.

Barnes picked up his guitar, backed by a projection of pole dancers’ silhouettes, and dove into the concert.

“Aureate Gloom” was influenced by ‘70s funk, and the band embodied it with headscarves, ascot ties and Barnes’ glitter-rimmed eyes.

Psychedelic, kaleidoscopic images filled the backdrop, matching the tempo and mood of each new track.

During “Bassem Sabry,” the first and most politically-influenced track on “Aureate Gloom,” the screen filled with major companies’ logos, as well as images of war propaganda and protests from the Westboro Baptist Church and Ferguson.

Various surreal skits transpired on stage, including actors dressed as dogs boxing before being broken up by Abraham Lincoln characters and performing a Morphsuit striptease.

The band let the chaos unfold around them, only reacting slightly when the “dogs” began to caress them.

Even the calmest moments were partially projected onto the billowing moth wings of actors wearing “dia de los muertos” masks.

The set was split into three sections, marked by Barnes’ costume changes.

While masked dancers raved on stage, Barnes switched his red suit jacket and satin shirt for a loose shirt and red apron.

As the costumes became more free and relaxed, the band did as well, with Barnes’ initially graceful, reserved movement shifting to wilder action – jumping around stage and removing the mic from its stand to get closer to the audience.

The band announced their last song, thanked the audience and exited. The crowd began clapping and chanting “one more song.”

That’s when the third section of the show began.

“They came back after the encore and played an entirely new show that was arguably better than the first,” said Kenny Jabon, senior in Engineering, who added that of Montreal was his favorite band.

Every time the band’s encore seemed to end, as other band members would wave and walk away, Barnes would stand center stage and play endless guitar riffs until the rest of the band returned.

The heavy electric guitar, combined with bass and moshing fans, shook the venue floor and sent vibrations through the audience.

A sheen of sweat on Barnes’ body mixed with the shimmering glitter on his eyes as the show transformed from curated ‘70s glam-rock to intense, Led Zeppelin-esque metal.

The final chords and background images were put on a loop as the band exited, leaving the audience dazed.

“It was incredible,” said Lauren Thibert, junior in LAS. “They’re worth seeing live even if you’ve never listened to them before.”

As the band stripped down both their sets and clothes, it was clear that while of Montreal can put on an artistic, provocative show, the heart of the show is talented performers who put their body and soul into the music and leave it all on stage.