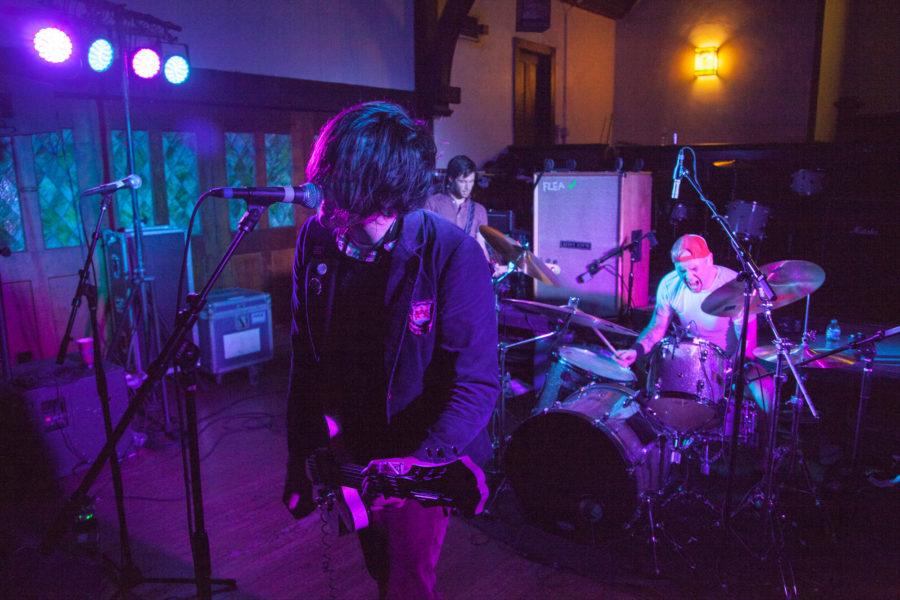 The Philadelphia-based band Beach Slang performs at The Red Herring on Friday night and into Saturday morning as part of the Pygmalion Festival. Beach Slang’s latest record was produced by local record company Polyvinyl.

One of Pymalion’s smallest venues became a chapel of punk Friday night.

Headliner Beach Slang, along with White Reaper and Champaign-locals Euriah and Single Player, shook up the The Red Herring in Urbana from 9:30 p.m. to 1:30 a.m.

The punk-rock lineup featured deafening guitar riffs and drum solos that were amplified by the small space and cathedral ceilings of what typically serves as a Unitarian-Universalist community center.

The evening began with Euriah, who made a point to keep talking to a minimum, and showcase tracks from their new EP. The set worked well with the relaxed crowd that had just begun to form: The lights were kept up, and the amps were low enough to allow for conversation.

After the show, the band greeted fans and handed out CDs while Single Player set up.

The band played a quick, energetic set. They encouraged fans to come as close as they wanted to the band, and the crowd complied. The audience shifted forward and formed a small circle pit during the first song, with a few fans singing along to slower, guitar-heavy tracks.

The crowd’s energy was high going into White Reaper, a Louisville-based garage-punk band that signed to Polyvinyl Records last year.

The four-piece’s sound added a ringing, psychedelic keyboard which wove itself through power chords and rasping lyrics. Occasionally, keyboardist Ryan Hater would play just by haphazardly slamming his fingers — and forehead, later into the set — into the keyboard.

While the only technical effects were blue spotlights, the audience and band worked together to make a visual spectacle, with Hater throwing himself into the middle of the pit and bassist Sam Wilkerson jumping from amps and a raised platform behind the band.

As the pit got rowdier, audience members on the edges of the packed venue began to stand on pews. The venue began to literally heat up, causing the band members to drip with sweat and some male members of the pit to forego shirts.

The entire effect was hilariously juxtaposed by the only other lights in the chapel: a large stained-glass window centered high on the wall behind White Reaper.

Most of the audience went outside to escape the heat after the set. Maybe the lower temperatures also chilled the energy, or audience members weren’t keen on staying out past midnight, but everything was calmer as Beach Slang took the stage.

The band seemed to be more fond of creating a rapport and introducing songs with extended comedic bits, which sometimes drifted off-track from the music. Frontman James Alex admitted that the Philadelphia band was preparing for a national tour and was still “working out the kinks.”

Issues which may have stemmed from a lack of practice, such as Alex doing an intro for the wrong song on the setlist or one of the band members missing a cue, stilted the set.

When the band got their act together, their talent shone. Alex’s sweat-streaked hair fell over his eyes while his guitar chords soared and mingled with rapid-fire drum riffs. Bass thrummed through the crowd and completed the classic punk foursome.

Polyvinyl signed the band after it released two four-song LPs, and produced its first full-length album. Alex noted going to the Polyvinyl offices in Champaign and holding the physical record was like a crazy dream.

He also said the dream seemed to continue every time he took in the enthusiastic, happy audience made mostly of college students who “got it.”

Beach Slang is not new to the scene, so hopefully they will hone down their act and focus on what really matters: the angst-ridden, punk music that brought them to Pygmalion.