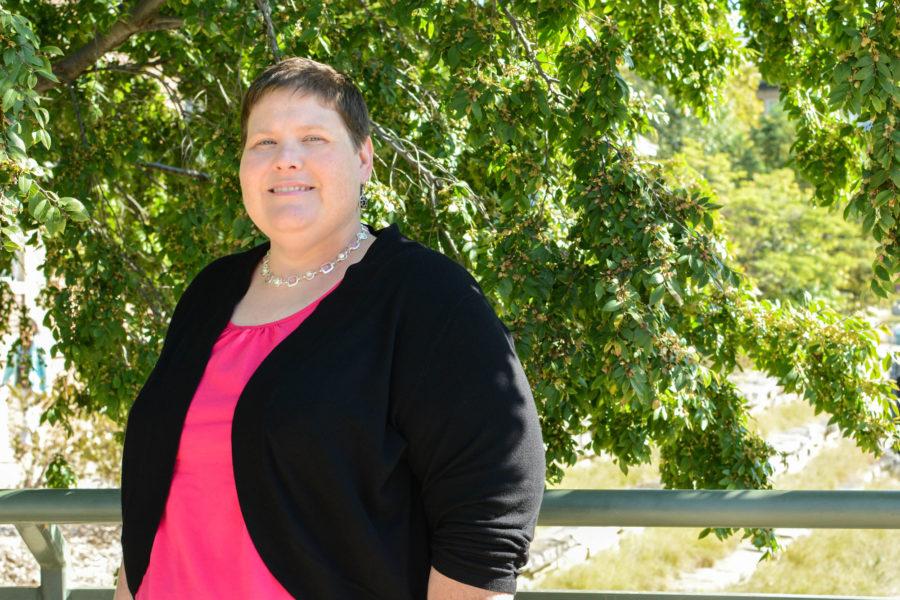 Some might call Sarah Adams a woman of unbreakable spirit.

When her fingernails became brittle and started to peel after using the anti-cancer drug Taxol, she simply wrapped her fingers in gauze and continued to work as the office manager for the ACES academic program.

Now, after almost a year in remission, Sarah’s nails are all but recovered, with only a couple starting to crack near the nail bed.

“The half-life of Taxol must be something else on fingernails — they must love it, because I’ve never had fingernails like these in my life,” Sarah remarked, examining them momentarily.

Now office manager for administrations in Engineering, Sarah is one of those on campus who has battled — and beat — breast cancer. She continues to be an advocate for those who are still fighting. For Sarah, this job isn’t restricted to October, National Breast Cancer Awareness month, but rather spans the entire year.

Her battle began when what initially thought to be a cyst turned out to be breast cancer. At 38, she was given the news by phone on May 10, 2013, while she was standing on the stage of Assembly Hall during graduation rehearsal. Sarah went through the entire rehearsal, only sharing the news with her coworkers after the practice concluded.

Anne Stites, Copy: Her full name is Alonda Anne, but her email signature says “Anne,” so we made the call to leave it as Anne. administrative assistant in ACES and Sarah’s former supervisor, was amazed by the way Adams handled the news.

“I think I would have broken down and probably cried a lot,” Stites said. “But she was a hero and just continued on.”

After receiving her diagnosis, Sarah’s doctor recommended she have a mastectomy. The tumor was the size of a small lime, and the placement meant she could not do a lumpectomy, or a procedure where only the tumor is removed. Following the surgery, Sarah took six weeks to recover before going back to work full time — when she only took Thursdays off for her chemotherapy treatments.

This was surprising to Stites, who encouraged her to take more time off, especially after Sarah’s nails began to peel.

Sarah was two weeks into chemotherapy when her hair began to fall out. She was in a car, running her fingers through her hair, when she felt strands clump into the palm of her hand. She let the hair fly out the window as her dad drove through Illinois’ countryside. The next day, she went into a salon to get all her hair buzzed off. While she enjoyed some aspects of it, like taking three-minute morning showers and saving money on hair products, it was also difficult at first.

“This society is one that if you don’t have hair, you get stares,” Sarah said. “As a woman, you’re kind of looked at like, ‘Oh my gosh,’ and it’s an immediate clue that you’re sick.”

For her, having hair during chemotherapy kept her cancer a secret — no one could tell she was sick. But once she lost her hair, her “secret” was out.

“I never wanted to be pitied; it is what it is. I never ever asked why me? Why not me?” Sarah said. “So many people have said, ‘Oh my god, I can’t believe how gracefully you handled that,’ but what option are you given?”

Sarah occasionally jokes that she was not a “good patient” during her treatment. When she was hospitalized for five days due to a blood clot, caused by cells that collected in the tube that administered her medication, one of her nurses turned a bed alarm on that detected when she got out of the bed. The nurse knew Sarah would get up to use the bathroom even though it was potentially dangerous.

Despite being insistently independent, she noted that it was extremely important to let people provide support by letting them know what they can do to help.

“A lot of times, people are like, ‘What can I do to help you?’ Take them up on that, otherwise they just feel so lost,” she said. “When you see somebody going through cancer, you can’t take away their pain, you can’t make it better, so people feel very helpless, and they just want to do anything for you. So even just telling somebody to go to the store for you, they will jump at that.”

Sarah herself has been a crucial source of support for others as well. A year after her diagnosis, Stites’ mother was diagnosed with breast cancer.

“It’s just nice to know I have a resource here. I can call, and she can help me out,” Stites said. “She told me which doctors and what to expect, and I was like, ‘OK, this is what we’re gonna do,’ and my mom was very grateful.

“It’s one day at a time, and I know that’s how Sarah lives, and that’s all we can expect.”

The past summer, Sarah went to a retreat hosted by Breast Cancer Recovery in Wisconsin for any women with breast cancer. This four-day retreat offered another form of support for her, since she was able to be around others who experienced a similar thing. She was able to talk about helpful topics, like getting beyond breast cancer emotionally.

Even though Sarah’s treatment ended, her side effects still lingered. Every now and then, she still finds herself with brittle nails and doubtful thoughts.

“Just survivor guilt, that’s something I struggle with a lot. Knowing people that haven’t made it, so why am I here?” Sarah said. “You sort of learn how to start coping. When you see people younger than you, younger and healthier than you who are not winning this battle, it’s hard.”

“A lot of cancer patients talk about the new normal,” she said. “You’re not going to go back to the way you were, but in a lot of ways, it’s a better you.”