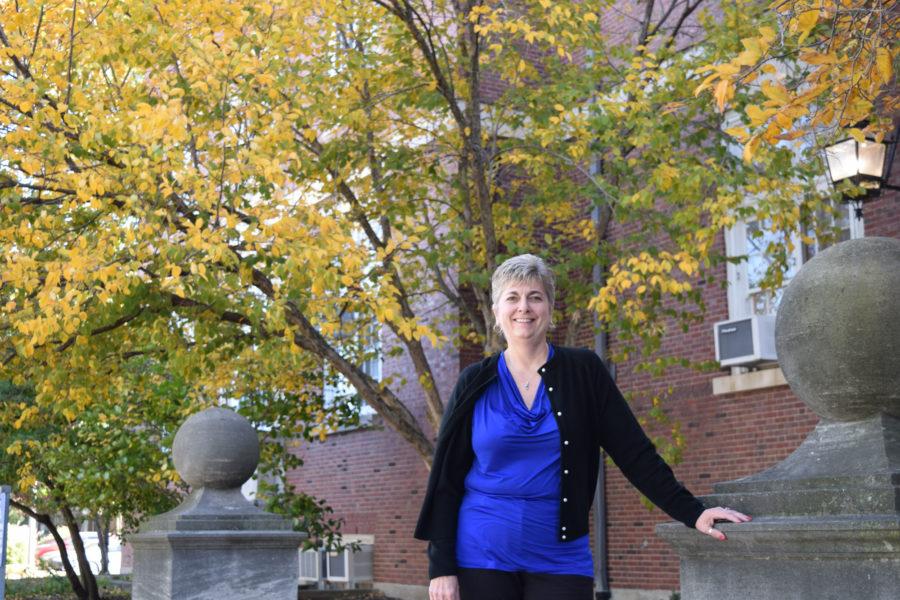 Every day, when Renaé Strawbridge gets ready, she slips on a delicate silver and pink bracelet. When you look closely, the word “survivor” is engraved in elegant letters.

Renaé said she wears it for a few reasons.

First, it reminds her that she is a survivor. But mostly, she wants it to be a conversation starter for people who have been diagnosed with cancer or are undergoing active treatment.

Renaé, a Stage 1 breast cancer survivor and program administrative assistant for the Illinois State Geological SurveyJT, said she considered herself a survivor from the time of her diagnosis in September 2002.

“That’s when you know that you’re fighting for your life and you are working at surviving,” she explained.

Sitting in an armchair in her office at the Natural Resources Building, Renaé shared her story. Even though she has been in remission for 13 years and has told the tale countless times, thinking of the day she was diagnosed still brings tears to her blue eyes.

With a family history of breast cancer, Renaé began getting mammograms early, starting when she turned 35. In 2002, at 45, she had 10 years of mammograms and ultrasounds under her belt. At a routine appointment, the ultrasound tech brought in a doctor who wanted to do a biopsy. Since she had a history of cysts, Renaé wasn’t alarmed.

But days later, she received a call from her doctor’s office, saying they wanted to discuss her test results. The nurse refused to tell her the results over the phone. Sensing something was wrong, Renaé brought her aunt to the appointment for support.

“When the doctor looks at you and says, ‘Hate to tell you this, but you have breast cancer’ and the first thought that goes through your head is ‘Oh I’m going to die,” she said. “That’s the scariest part.”

After the initial shock, she took action, making appointments as soon as possible, even when doctors tried to postpone them. She said she told both her doctor and surgeon that if she had time on her hands, she wanted to keep it there, and they complied.

“I must have had some look on my face that said ‘Don’t mess with me,’” she said with a grin.

“I thought it was very appropriate that my last radiation treatment was on April Fool’s Day, because no foolin’, cancer’s not fun,” she said.

For Renaé, after the initial shock, the hardest part was anticipating the side effects of the cancer drugs. One of the drugs caused her to lose her hair. She opted not to wear wigs, so she was either bald or wore knit caps. She said people would often stare when she was in public.

“Our society is very, very focused on beauty especially in women and hair is considered something beautiful,” she said. “It’s so unfortunate because if you’re only looking at the hair you’re not seeing the person. So breast cancer gave me an opportunity for people to see the person rather than just the hair.”

One day, she went to lunch with a co-worker, whose eyes kept diverting. When Renaé asked her what she was looking at, she responded that a man kept staring at them and she didn’t understand why.

“I looked at her and pointed to my head and I go, duh!” she said. “She was like I forgot. (My co-workers) had grown accustomed to seeing me everyday and we got a good laugh out of that.”

And laughing was what got Renaé through the experience.

“Humor is so much a part of my life, I use it for everything,” she said. “It’s how I de-escalate tension, it’s how I relieve my stress, it’s how I handle the adversity that comes in my life, and I had friends and family that understand that.”

While Renaé said she appreciates Breast Cancer Awareness Month, she doesn’t like that everything focuses on just breast cancer, because many types of cancer don’t get the same attention. Currently, her cousin Randy is battling colon cancer.

That is why Renaé promotes cancer research and clinical trials.

“If not for the people before me who participated in clinical trials, I may not be sitting here talking to you today. Research is what allows our medicine to advance,” she explained. “I like knowing I have some teeny tiny piece in the scientific puzzle that may someday either eradicate it or help screen for it and prevent it.”

Renaé said she was lucky to have support from her family and friends. Her sister even shaved Renaé‘s head when she began losing her hair. However, there are some things only those who have had cancer understand.

“You don’t know how it feels to ride a bike until you actually have,” said Renaé‘s best friend of 40 years, Deb Griest, about cancer.

With the encouragement of Griest, who battled Stage 3 colon cancer, Renaé joined a cancer support group at Carle Foundation Hospital.

“I badgered her successfully for a long time,” Griest joked.

Griest said support groups are so important for cancer patients and survivors because they have walked that same road and felt that same anguish. And sometimes, even during the hardest parts of treatment, survivors can laugh together. Renaé agreed, and still attends the group to this day as a survivor.

Now, she said she likes that she is giving back and helping other patients.

“When someone is in the trenches of active treatment, you can’t climb down the ridge through the valley with them, but you can stand on that ridge and you can cheer them on and you can reach out and hold their hand for a while,” she said.

Renaé emphasized that there is a life after cancer. It has brought her new best friends, life-changing conversations and clarity in her life. In 2005, she decided to go back to school, earning her Associate’s degree at Parkland College and Bachelor’s degree at Eastern Illinois University.

“Death is a part of life and although I mourn that, I don’t get stuck there. I’m too much of a survivor to get stuck there,” she said. “Life goes on … and I want my life to be a good quality of life.”

Renaé said she wants others to have that good quality of life as well. She said she typically posts on her Facebook page once a week to encourage people to get mammograms.

“I’ve had a couple of friends who have postponed their mammograms and I’m like, ‘I will hold your hand, I will walk with you, I will explain everything,’” she said.

As for students, she said it is never too early to be conscious of cancer risks.