Sniffing out the truth behind KAM’s smell 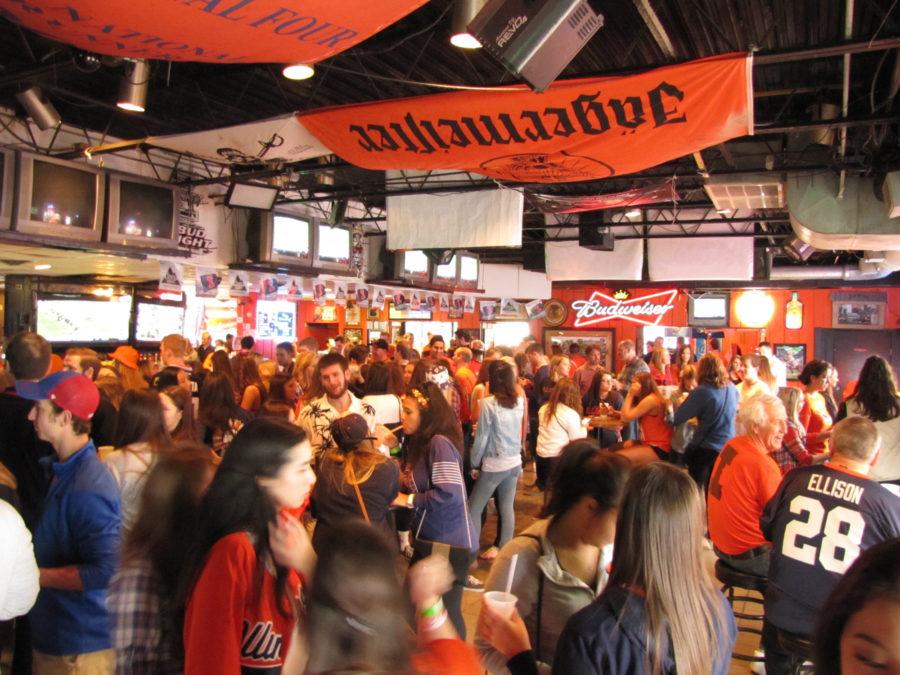 Students participating in “Block” at Kam’s the weekend of Homecoming.

Anyone who has walked past KAM’s knows the smell.

Even though University students line up for Country Night and Blue Guys every week, and various rumors of poor sanitation are common, no one is entirely sure where the smell originated.

“You do have everyone contributing to the smell. People ice out drinks, people spill drinks, people break bottles and beer goes everywhere. You can only mop up so much, especially on a tile floor,” said Kamil Bajan, senior in LAS and manager at KAM’s.

In the end, the smell really comes down to one thing.

KAM’s advertises as an Illini tradition, and though its website says it’s been in business for 30 years, alumni accounts show it has been on Daniel Street for much longer.

“We have people come in here from the ’70s and they say, ‘Oh, nothing’s changed,’” Bajan said. “The funniest thing is when people on this campus say it and it’s their fifth time here in two weeks.”

He said that in the two years he’s been working, the smell hasn’t gotten better or worse, and if it did, the campus would hear about it.

“Word of mouth obviously spreads like wildfire,” he said.

Rapid communication is the reason for many of the rumors surrounding the smell.

“People say, “KAM’s doesn’t mop their floors,” Bajan said. “If we didn’t mop our floors, you wouldn’t be able to walk.”

KAM’s has a thorough cleaning regime, despite popular opinion. After the bar closes, the doorman cleans all the cups, all surfaces are cleaned, the silvers behind the bars are cleaned, and someone comes in to mop at 4 or 5 a.m.

Another proposed source of the smell is the bathrooms.

“The toilets never work,” said Haris Khan, junior in Business. “The roll of toilet paper’s always in there; there’s always like two beer bottles in there.”

Bajan said that even though people shatter bottles into the toilets, they are always cleaned by the end of the night, and the smell definitely isn’t coming from the bathroom more than anywhere else.

“If you go in the basement, it’s like a whole other level,” Khan said.

He described the smell as a something rotting, emanating waves of smell “the way dry ice releases fog.”

Bajan said the smell was like a combination of sugary, carbonated beverages, stale beer and vomit.

“A lot of people think people are puking in here every day. That’s not the case. I can only recall one time when I had to clean actual puke from the dance floor,” Bajan said.

Even though people puke in the bathrooms, it’s cleaned up quickly, just like any other bar.

Another KAM’s staple has been said to cause the smell: Blue Guys. But Bajan said the signature Blue Bam doesn’t add to the smell more than any other sugary drink.

“I think it’s much more engrained in the actual structure of the building,” he said. “If you really wanted to get rid of it, you would either have to start from scratch or invest a couple thousand dollars.”

Alaine Stanner, senior in LAS, grew up in the area and knows KAM’s well. It was the only bar her friends went to last year.

“I hate the smell,” she said. “It’s more of a townie bar, so despite the smell of it, everyone still loves it.”

Stanner described the smell as “a mix of stale alcohol, puke, pee and regrets.”

She also has a class in the psychology building three times a week.

“I walk on the other side to purposefully avoid KAM’s,” she said. “You still get an essence of it.”

Bajan said the distance KAM’s can be smelled “depends on how windy it is.”

Stanner works as a brand ambassador at KAM’s and said the smell gets better after being in the bar for a while.

“Once you start drinking, you don’t really notice it,” she said. “I think that’s also why people get so drunk there.”

Though the smell is never described as pleasant, it doesn’t stop people from crowding in.

“KAM’s is the oldest bar on campus. When people think of Illini drinking they think of KAM’s first, and then they always add, “Oh, the smell.’” Khan said. “It’s almost a selling point like: KAM’s smells so bad, come and drink your worries away.”

The smell, no matter how bad, adds character, Stanner said.

“Not everybody desires the experience to go to a college bar,” Bajan said. “You move on from this, and you end up paying $10 a Bud Light downtown.”

He said that after getting used to it, the smell is endearing.

“That’s what the magic of KAM’s is. It’s been this way, and it’s not changing, and it hasn’t changed, and it doesn’t seem like it will be changing,” he said. “Everyone knows, KAM’s smells like KAM’s.”