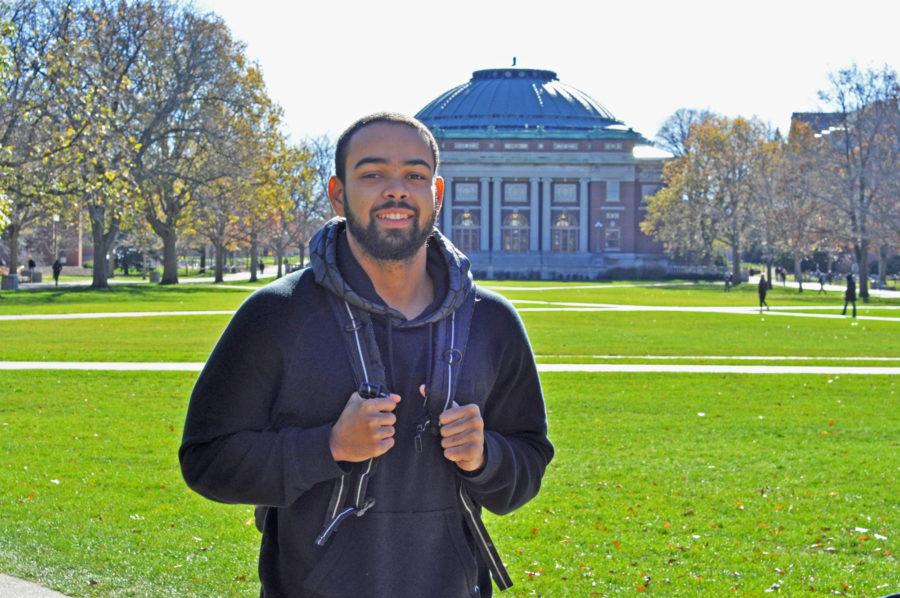 Marco Fabrega, developer of the app The Mouve, stands in the Quad on November 13, 2015.

Marco Fabrega was out one night after attending a boring party. He started texting his friends, asking around about what there was to do and where he should go. After not getting much response, he decided to go home.EJ The next day, he found out there was a great party right down the street from where he’d been.

For Fabrega, the experience made him ask himself: How do you really know what’s happening around you?

“It kind of just sprouted the idea of, well, what’s the move?” Fabrega said. “What could we be a part of right now?”

Fabrega, who graduated last May with a degree in architecture from the University, decided to take this idea and run with it. He envisioned a mobile app that would inform people what events and activities were going on around them in real time. Then he met Samuel Ojogbo, senior in Engineering, through a mutual friend and realized they had similar ideas.

“As time went on, we saw we could actually do something good,” Ojogbo said. “We just thought — we could do this.”

Their ideas have turned into The Mouve, an app that allows users to browse what events are happening around them in a 24-hour period, create their own events to be shared publicly or among friends and stay updated with the events through photos.EJ

The events are called “mouves,” and could be anything from a pickup basketball game to a group of friends hanging out at a house party. Their target market is college students and college campuses, due to the wide variety of events and the lack of a single platform for discovering these happenings.

As The Mouve has grown, Fabrega, Ojogbo and their third co-founder, Uduimoh Umolu, decided to take it one step further by applying for and joining the iVenture Accelerator, the University’s educational accelerator for student startups.EJ

“We knew we had an idea, but we wanted to turn it into a business,” Fabrega said. “It was a good opportunity for us to solidify our idea and also hear other people’s input and just kind of be in that atmosphere for entrepreneurship.”

Fabrega said their acceptance into the iVenture Accelerator program allowed their team to gain motivation.

“We learned a lot from the iVenture Accelerator . . . we saw our productivity wasn’t the best, so we learned a lot just seeing other people work,” Fabrega said. “It got to the point that other people were really excited about our idea, so it made us much more excited.”

Additionally, Fabrega said the program gave them networking opportunities that let them branch out and reach new people.

It’s been two years since the team began “dreaming” about the app idea for The Mouve. Fabrega said it has been exciting to see how one bad night out turned into an app that is currently in its beta phase.

“It’s just cool, like, wow, we came up with this idea, and it’s starting to really turn into something,” he said.

Fabrega’s main focus with The Mouve has been in design. He said he has always been a design-oriented creator, tracing back to when he would play with Legos as a kid, not bothering to use the instructions.

“He definitely brings that uniqueness, the artistic eye,” Ojogbo said.

Fabrega said he considers himself an entrepreneur, and his background in architecture helped him develop the work ethic that being a co-founding member of a startup has required.

“We had to spend so much time making our studio boards, things like that,” he said. “I spent a lot of time in the studio, but now it’s not necessarily in architecture anymore, but it’s towards something else.”

He said the time commitment of being involved in entrepreneurship and being a student at the same time has been challenging but worth it.

“When it’s something you’re passionate about, it doesn’t matter, those sleepless nights or those late days, it’s all for that common goal,” Fabrega said. “One thing about our team is, we’re not really too worried about the time that we put in, because it’s all toward our goal of really making something special.”

Being on a campus that has many entrepreneurship opportunities has been beneficial to The Mouve’s vision, Fabrega said. He said these numerous opportunities can be overwhelming, but the “experimental atmosphere” of campus has helped them receive feedback as well as support.

The Mouve hopes to finish their beta test period by Thanksgiving and then officially launch the app. Fabrega anticipates many changes and iterations, but he isn’t certain what the future holds — both for The Mouve and for his career.

Above all, Fabrega said he hopes to be in a career where he can use his ideas to create.