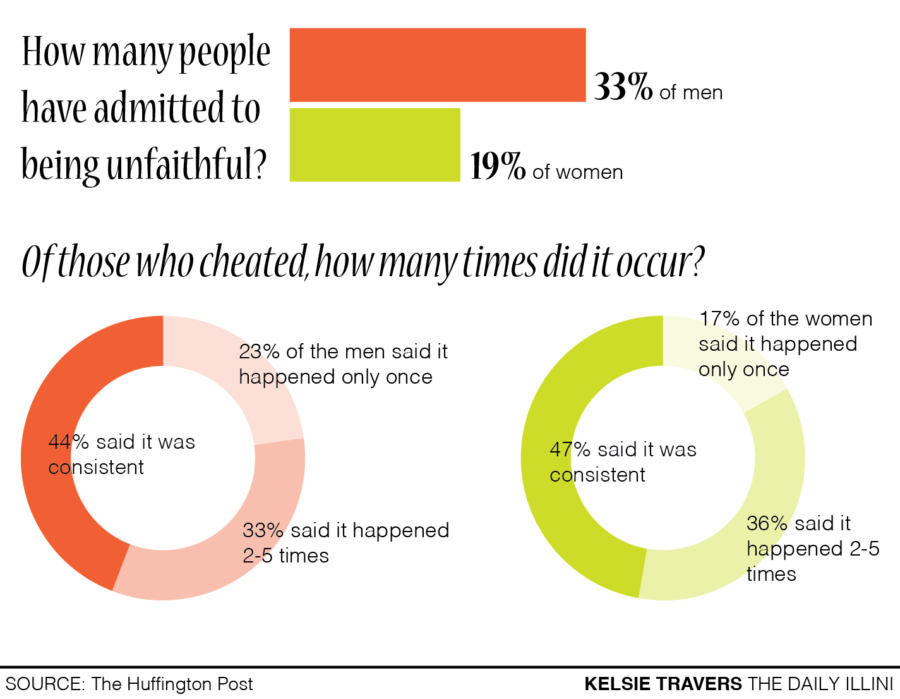 Jenn Flannery, junior in Educationmp, was dating her now ex-boyfriend on-and-off for four years. They continued dating while he was a freshman in college and she was still a senior in high school. However, being apart from him was difficult for Flannery.

“He was more mature than me, and I was just missing attention that he had used to give me when we were both in high school. I was at a party and a guy that I had kind of had a flirty friendship with for some time made a move, and I gave in. After a few days, I felt really guilty, and one of my friends who had witnessed us kissing helped me realize it was wrong, and I needed to tell my boyfriend at the time, so I did,” Flannery said. “We stayed together for about a month more and then broke up as things weren’t really the same after.”

Flannery thinks it was the right decision to stay in the relationship because they needed to figure things out in person once her ex came back home from school. But they knew that it eventually needed to end. She figured if it couldn’t work while she was still in high school, the relationship probably wouldn’t have lasted once she also went away to college.

There are a myriad of reasons why a person might cheat on their partner, according to Marie Pritchard, owner and therapist at New Dawn Counseling Center of Central Illinoismp. Pritchard wrote in an email that there can be different definitions of cheating, depending if one physically cheats on their partner or becomes emotionally invested in someone else.

“Sometimes it has to do with a disconnect in the relationship, but it can also be more about the individual person who is cheating. That lack of balance can be from past trauma, work and school stress, relationship stress or any number of dysregulating elements,” Pritchard wrote. “A true relationship takes effort, and an affair can have the appeal of not requiring the real work of a relationship.”

Flannery said that for her, she was missing her boyfriend’s attention.

“I wanted attention. For girls, when they cheat, a lot of times it’s because of that. They like the attention that a boy may give them,” Flannery said. “Other times, I think it could be because the person forgets what their boyfriend or girlfriend means to them. They get comfortable in the relationship and take advantage of them, so they may cheat just because they aren’t thinking or get caught up in the moment.”

Michelle Kenny, junior in Social Workmp, was dating her now ex-boyfriend for one month before he confirmed her suspicions of him cheating on her. Kenny was upset, but at the same time, she was relieved the truth was finally coming out.

“I was really hurt. I cried a lot. But also, I had been suspecting it, so I guess it was like this weight was lifted off me. I had a lot of anxiety leading up to the breakup, so it helped to have it confirmed that I wasn’t just making things up,” Kenny said.

Pritchard wrote that cheating can have some deep affects on a person emotionally.

“Effects can vary depending on the person. Often, there is this sense that the world does not make sense, particularly if he or she was blind-sided by the cheating. They may blame themselves for not being good enough in some way. An infidelity can often cause symptoms of anxiety,” she wrote. “If not dealt with, these feelings can be brought along into future relationships. The lack of trust and expectation of betrayal causes stress and conflict in these new relationships.”

Kenny said that she did have some trust issues going into her next relationship. But overall, she has a positive outlook on her former relationship.

“I learned and grew from it as a person. Everything happens for a reason, right? He’s still with the girl. It’s been a few years, actually, so I’m glad it worked out for them,” Kenny said.

Despite most people arguably agreeing that cheating is a negative experience, Pritchard wrote that there could be some positives coming from an infidelity, such as a couple learning to become more open with communication. She also wrote that there is a chance for the relationship to be salvaged, if there is “full transparency” and “if the cheating partner provides reassurance.”

Flannery acknowledges that cheating on her boyfriend was an immature lapse in judgment, but she feels she has grown as a person because of it.

“It’s important as an outsider to not always believe what you hear,” Flannery said. “Situations like this get twisted and turned upside down when rumors fly and people talk. That certainly happened in my situation. But I think every choice you make has a way of defining what will happen next, so if you make a big mistake like this, you have to be able to understand that there will be repercussions. Although I’ll always regret what I did, it has definitely made me stronger and much more mature for my future relationships.”

Pritchard wrote that, overall, people who have been cheated on needs to think about what is best for themselves in the end.

“Are they invested enough in the relationship to try and work through the cheating, or does it make more sense to walk away? Does the partner who cheated seem invested in truly working though this and not just sweeping it under the rug? If the choice is to walk away, the person needs to allow themselves time to grieve. Self care is important at this time,” she wrote.

Tweet: Have you or anyone you know been cheated on before?