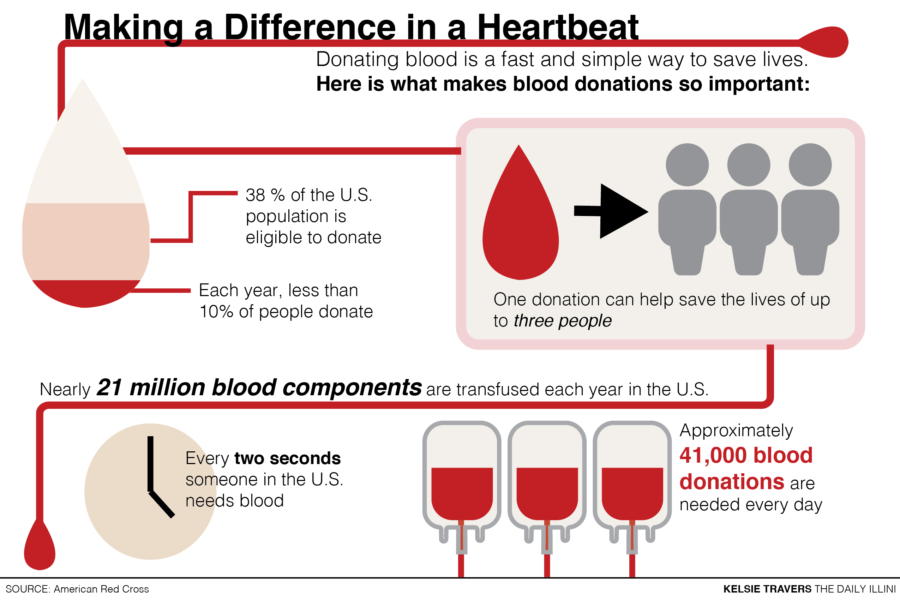 When her close friend was in a serious car accident, Kelly Cullertonbr, sophomore in Nursing, realized that everything could change in the blink of an eye.

After losing so much blood from the trauma, Cullerton said her friend was minutes away from taking his last breath. However, it was a large blood transfusion that saved her friend’s life.

“Without that transfusion, it is likely that he would not have made it,” Cullerton said.

Now, after learning how important blood transfusions are, Cullerton serves as the blood services coordinator for the American Red Cross clubbr on campus.

“To me, this shows how constant the need for blood is and how important it is that people start to and continue to donate,” Cullerton said.

During National Blood Donor Month in January, students are highly encouraged to begin their year by donating blood. Laurie Nehring, communications director of the American Red Crossbr, said this month is one of the best times to donate because it is more difficult to collect enough blood during the winter months.

“Inclement weather can result in blood drive cancellations and seasonal illnesses, like the flu, (which) can prevent some donors from making or keeping appointments,” Nehring said. “National Blood Donor Month has been observed in January since 1970br and recognizes the importance of giving blood and platelets while honoring those who roll up a sleeve to help patients in need.”

Having donated blood several times, Cullerton believes the process is not only beneficial for those in need but is also a rewarding experience for those who donate.

“It is different than just giving away your money. You are giving away a part of you to help someone else,” Cullerton said. “This requires people to truly care about one another and do what they can to help. I think that is an amazing thing.”

When Cullerton first donated blood, she was unsure of what to expect about procedures and potential physical side effects. But afterward, with the whole process only taking approximately an hour and 15 minutes, she instantly became a regular donor, especially after she felt gratified.

“Although my physical feelings weren’t affected too much, after donating, I felt really great about making the donation and the good that it might cause (and) the lives that it might save,” Cullerton said. “It was a great feeling.”

The donation process begins with a short physical examination and an interview regarding any health and travel history. If eligible, approximately a pint of blood is collected from the candidate. Once he or she is finished, the donor is then led to a refreshment area. Even though the entire process may take up to more than an hour, the actual donation is only about eight to 10 minutes.

Hailey Levitonbr, junior in Applied Health Sciences and member of the American Red Cross club, said blood transfusions are highly important because there is no way to replicate blood in a lab.

“There is no substitution for blood and no way to replicate it, so blood donations are the only way to supply blood,” she said. “Students can make a huge impact just by donating every once in awhile, and once you’ve donated the first time, it’s easy to go back and continue to donate.”

Donor centers nearby and various organizations continually organize blood drives on campus, whether during National Blood Donor Month or throughout the rest of the year.

“Donating in January is a great time to donate because it’s right after the holiday season and is a great way to continue the giving spirit into the new year,” Leviton said.

“My nephew received blood products while fighting cancer. Blood donations helped extend his fight and gave us more time to spend with him,” Nehring said. “We will be forever grateful to the strangers that took the time out of their day to help a stranger in need.”