Hoverboards: 'Back to the Future' or back to the emergency room? 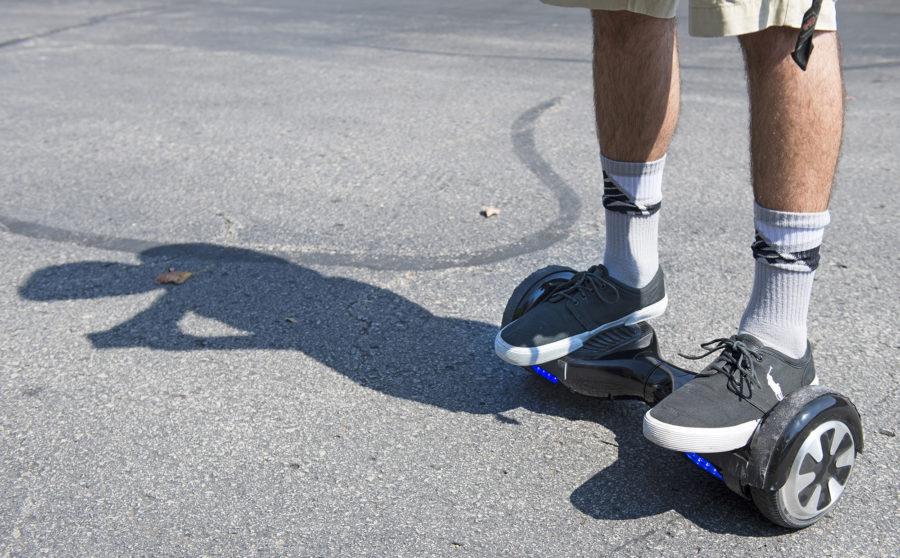 Logan Meis, 20, balances on his hover board outside his apartment complex in Overland Park, Kan., on Friday, Sept. 4, 2015. Meis purchased the personal transportation device for about $330 online. (Tammy Ljungblad/Kansas City Star/TNS)

On Green Street, across the Quad and down Wright Street, a blue glow can be seen illuminating sidewalks. The light shines from a futuristic device, but not the kind viewers might have seen in Back to the Future Part 2. In fact, this hoverboard doesn’t float at all, but rather, it has been tied to multiple injuries and fire hazards. With the risk of explosions or injuries, are these boards back to the future or back to the emergency room?

Since Jan. 18, hoverboards have been banned from all campus facilities as stated in a mass mail sent by Director of Public Safety Jeff Christensench. The mass mail explained that the decision to prohibit hoverboards derived from “issued alerts about the potential fire hazard.”

Dr. Morris Kharaschch, University alumnus and chairman of emergency medicine at NorthShore University Health System, addressed the risks and injuries associated with hoverboards and the issue of riding the motorized devices on campus.

“Hoverboards go extremely fast but people are not wearing the protective devices necessary. We expect some significant injuries as things move forward and (the boards) become more popular,” Kharasch said.

According to the ER doctor, most boards can carry up to 220 pounds. He also explained that the speed at which hoverboards move — about 12.5 mph at their fastest — is also a concern.

“All of the folks that I know of that use hoverboards do not wear a helmet or any other protective device, and that’s the concerning part of this.”

He said with other devices such as rollerblades and motorized scooters, there is a larger awareness when it comes to wearing protective gear.

According to Stacey DeLorenzo, the chair of the campus transportation committee,ch there is a policy that addresses in-line skates and skateboards in the campus administration manual. Last week, an additional policy regarding hoverboards was added to the manual.

Kharasch stated that there have been a lot of wrist fractures and head injuries caused by hoverboard use.

“The injuries are even worse in that it is an unstable board,” he said.

He also discussed that hoverboards are ridden most in malls where they are sold, which is a location where individuals do not think to wear a helmet.

“There’s been no expectation to wear wrist guards or helmets, so what we expect to see is a significant wrist fracture from falls on outstretched arms, which happens frequently when learning how to use hoverboards,” Kharasch said.

“There has been a lot in the literature recently about hoverboards and injuries. Around Christmas time, there have been a lot of injuries reported,” Pliura said.

The urgent care physician said hoverboards and skateboards cause similar injuries. He said that when people are on a skateboard, they often fall with an outstretched arm. The individual will suffer injuries, such as fractures, contusions and even lacerations.

According to USA Today,over 30 universities have banned hoverboards from their property due to safety concerns. Several public locations have banned the devices as well. The University implemented this ban at the start of the spring semester.ch

DeLorenzo explained that her transportation management committee handles all types of transportation and infrastructure on campus, whether it is walking, biking, driving or busing.

Kharasch stated his perspective regarding the University ban.

“As an ER doctor, I absolutely agree with the ban because hoverboards go extremely fast and are very unstable. Banning these kind of devices will really limit some of the significant problems that come with motorized devices that go significantly fast. They started to ban them at other places across the country not just because of the issues with the charging and combustion but because of the injuries associated with things that move pretty fast.”

Aside from the risk of injury, hoverboards also raise a fire hazard, which can cause a hazardous situation on a college campus.

“The biggest thing is the danger with the batteries of hoverboards. The consumer product service report says there are some hoverboards with batteries that have the potential to catch on fire or explode when charging,” DeLorenzo said.

Kharasch also brought up the issue of fire associated with the motorized boards when charging the devices. The ER doctor explained that the issue occurs when people are unaware of any issues as they go around the house or they leave the board in the charger when they’re not home.

“From emergency medicine, we do deal with a lot of folks who are exposed to fire or enclosed devices where there is smoke. We are extremely concerned with these devices,” Kharasch said.

Ultimately, DeLorenzo expressed that safety is in the hands of the individual using the motorized board.

“With any mode of transportation going around campuses, we are just asking people to please be predictable. Please look out for others around you and don’t have headphones or look down at your phone. Act in a way where you abide by the rules and safety features we implement,” DeLorenzo said.