Off the screen and onto the stage 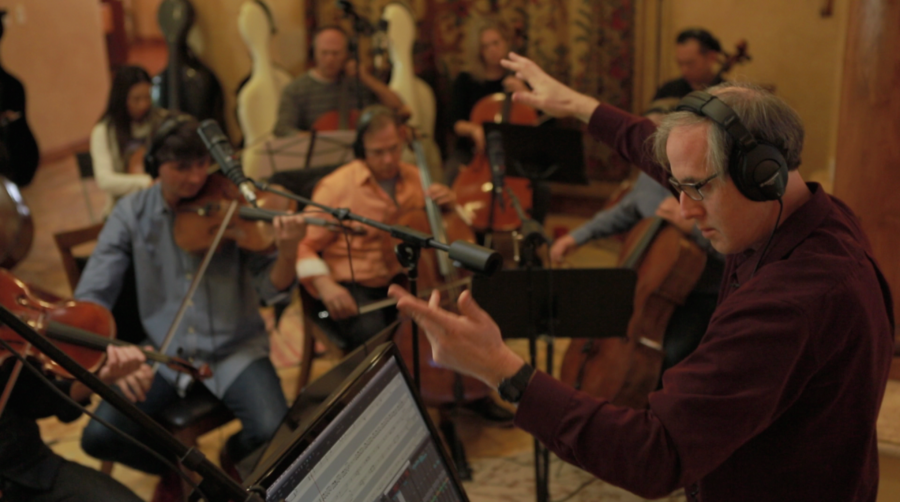 In the early ’80s at the Eastman School of Music, Jeff Beal and Stephen Alltop were both undergraduates pursuing a career in music. Beal studied trumpets, performance and composition; Alltop studied organ and conducting. But after their graduation in 1985, they both went their separate ways in the musical realm.

Beal moved to the San Francisco Bay Area shortly after college and then relocated to Los Angeles in 1991. In L.A., his career as a composer for film and television took off. He has since composed works for television shows, films and documentaries such as “House of Cards,” “Monk,” “Pollock,” “Blackfish” and “The Pixar Story.” Beal currently has 116 credits to his name as a composer on IMDb.

In the meantime, Alltop received two master’s degrees from Eastman, one in conducting and another in organ. He also obtained a doctorate in orchestral conducting from Northwestern University. Alltop has taught full time at Northwestern since 1994 and has served as the music director and conductor of the Champaign-Urbana Symphony Orchestra since 2013.

About two years ago, Alltop started watching “House of Cards” and was struck by the “exceptionally good opening credit sequence musically.” When he looked up who had composed the score for the show, he immediately recognized the composer’s name. Alltop got in touch with Beal, and they started talking about a way to collaborate. The result of this reconnection will come to life on Saturday, Jan. 30 at the Krannert Center for the Performing Arts, as the Champaign-Urbana Symphony Orchestra will perform “House of Cards in Concert.”

Starting at 7:30 p.m., the Champaign-Urbana Symphony Orchestra will showcase Beal’s compositions for film and television. Beal will attend and perform his trumpet concerto, “House of Cards” suite and music from “Pollock.” He will also talk about his career in Hollywood.

What Alltop is looking forward to the most for “House of Cards in Concert” is seeing Beal in person after many years.

“I haven’t seen him for 30 years, to be honest,” he said. “It’s a really great thing when you’re a student and you have the opportunity to be with other talented and bright people … and then down the road see the things they’ve accomplished. … It’s very satisfying to see what they’ve done.”

For Beal, the concert will be a combination of both of his worlds.

“I think it will be fun. I think the audience will get to hear some of the music that they know me for and are familiar with from the show, but they will get to hear some of my pure concert music,” Beal said. “I love live performance. (That is) part of the reason that I really reached out to Stephen Alltop and am so excited about this (concert). I get to work with musicians a lot when I’m recording my scores, but I don’t get to do as much live performance. It’s definitely something I want to do more of in the future.”

J. David Harris, associate professor of clarinet at the University and principal clarinetist with the Champaign-Urbana Symphony Orchestra and Sinfonia da Camera, will perform Beal’s clarinet concerto at “House of Cards in Concert.”

Alltop approached him last year, and Harris said he was happy to play Beal’s concerto for the clarinet because the music “looked like it would be fun to do.”

Harris has been working on the clarinet concerto since last May, when Alltop gave him the music. He said clarinetists work for a long time on a piece to get a good grip on the right style and technique.

Starting on the Wednesday before the concert, the Champaign-Urbana Symphony Orchestra will only have four rehearsals. Harris said this schedule is pretty compact and is the normal rehearsal process for most symphony orchestras.

“Some things are a real chore to practice, but this has been completely enjoyable,” Harris said. “It’s a fun piece of music. It’s very expressive and has a very lovely slow section that I think is tremendously expressive.”

In the weeks before the concert, Beal has been finishing up the score for the fourth season of “House of Cards” — on which he has been working since mid-June of last year — and is getting ready to start the soundtrack. He said composing for the show is a bit of a marathon because a season contains 13 episodes with about 30 minutes of music each. Beal has an iTunes playlist of all the music he did for the upcoming season, and he said it added up to six hours and 15 minutes.

To Beal, composing for “House of Cards” is a fun process because the season is released all at once for people to watch.

“That’s the odd thing, you know,” he said. “You work your seven months on something, and people watch it in a couple days and say, ‘OK, what if we have more?’ Well, give me time; give me time.”

Beal also said that another funny thing about being a film composer is that he works at home in his studio, yet his work on “House of Cards” is viewed all over the world.

“Sometimes it’s easy to forget just how widely in the world this music goes out and to see it reach so many people,” he said.

The award and reward

In September 2015, Beal won a Primetime Emmy under the category of Outstanding Music Composition for a Series (Original Dramatic Score) for his work on “Chapter 32,” the sixth episode of the third season of “House of Cards.” Over the years, he has been nominated a total of 15 times for a Primetime Emmy and has won three other statuettes: one for “The Company” in 2008, one for “Nightmares and Dreamscapes” in 2007 and one for “Monk” in 2003.

He said an Emmy is a great symbol and the award shows are fun and terrifying. Beal said that, although it is great to be appreciated, he has learned to not put a lot of emphasis on awards because he does not compose with the hopes of winning. As a result, he said having his work featured in “House of Cards in Concert” is infinitely more rewarding than receiving an award.

“People will not remember 10 years from now what won an award and what didn’t win an award, but if you do great work that has integrity and is of a certain quality, that has the potential to live on and to be remembered, that really is so much more fulfilling and really meaningful,” Beal said. “I think that’s why we do it, and that’s really the best reward. That’s why I am so excited about (the concert) and all the traveling I’ve done.”