Finding 'the one' in college 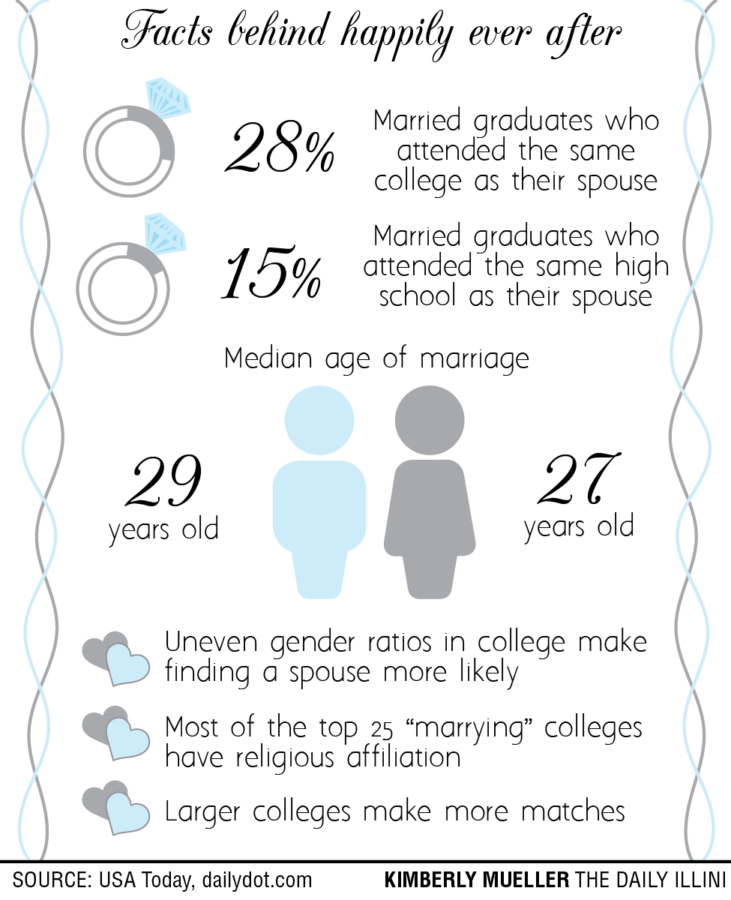 Two years ago, former Chancellor Phyllis Wise told the Class of 2017 during Convocation that it was highly likely the then-freshmen students would end up meeting their future life partners at the University.

Wise’s speech reflects a pressure some students might feel, a pressure to find Mr. or Mrs. Right by the time they graduate. But Brian Ogolsky, assistant professor in Human Development and Family Studies,JT does not believe this pressure is felt as much today as it was decades ago.

“The average age of marriage is sneaking up close to 30, so the norms of society are shifting away from young people marrying in their early 20s,” Ogolsky said in an email.

“It used to be that college was the one place where people found like-minded others. Now, there is a seemingly endless array of options,” Ogolsky said.

Ogolsky has also found that people are more mobile today.

“Now, the possibility of taking a job in another location enables people the flexibility to find partners who are not in the immediate area,” Ogolsky said.

“Even though I have been in a few relationships in college, I did not feel pressured to commit to finding a spouse because it was not the culture of those around me. I was in a fraternity as an undergraduate, and although some of my brothers have ended up being married to their college girlfriends, there was generally a laissez-faire attitude about committed relationships within my friend group,” Serio said.

Serio believes that a person’s family and the culture of a college influences students seeking out spouses.

“My younger sister attends a small Christian college, and many of her friends have attempted to get engaged by the time they are juniors. At a larger school such as Illinois, I think there are still cultural niches where the pressure to find a wife is very present, but it’s definitely not the general campus feel,” Serio said.

However, Kaitlin Kamp, University alumna in media,JT comes from a family where getting married young is the norm.

“I’ve dated my current boyfriend since freshman year. I come from a family where the girls get married and knocked up before 25, so there was a bit of pressure there. But it’s mostly the pressure that if you date in college, that has to be the person you marry. So not so much ‘finding a spouse’ for me, more so ensuring your current partner will be your spouse,” Kamp said.

Kamp believes that people feel this need to find a spouse before graduation because they are too scared they won’t have the opportunity post-graduation.

“My friends ask me about it all the time. They ask, ‘Do you think Drew will propose after graduation?’ And it’s like, I sure hope not; I don’t want that yet. There’s this expectation that if you date in college, you marry that person immediately,” she said. “I think it mostly stems from the idea that in college, you’re surrounded by people who are your same age, with similar interests and similar life situations. So it’s really a very ideal place to find a partner, and it’s really easy. I think people are scared if they can’t find someone in this good of a situation, they never will.”

A common joke among college students is the “M.R.S. Degree,” or the purpose of going to college is to find a financially stable husband. Serio does not believe this myth occurs with the women on campus.

“I don’t think at Illinois that there could be many young women that would dedicate so much money and time to getting a degree just to not use it. Granted, there are many who make it their mission to find a husband, but I think it’s uncommon to do so just to disregard the degree they earn,” Serio said.

Kamp, however, has a different point of view compared to Serio.

“I would love to say that because we go to such a great University, all women here are focused on making a career for themselves. I think that’s mostly true, but unfortunately I think the ‘M.R.S. Degree’ joke exists for a reason. I was in a sorority for two years and getting a “ring by spring” was definitely a goal,” Kamp said. ” As forward thinking as young women are, there’s still this competitive edge that marriage is the end goal for women. It’s better than it used to be, but I’ve seen countless girls skip studying or drop classes because their boyfriend is in law school or something.”

Serio also said, based off his international friends, that there is a higher pressure to find a spouse if one is a student from another country, especially due to religious concerns. Kamp said that if a culture does not allow a woman to work and that her husband is her only source of income, it becomes a “dire situation” to find a husband.

Overall, Ogolsky said it is becoming more and more common for college students to wait years after graduating to get married.

“In general, emerging adulthood is stretching later and later into the 20s, so it is certainly becoming much more normative for people to wait. The likely reason for this is that young people desire a more diverse set of experiences before they want to ‘settle down.’ Those experiences may include some job stability, traveling, or different romantic partners,” Ogolsky said.